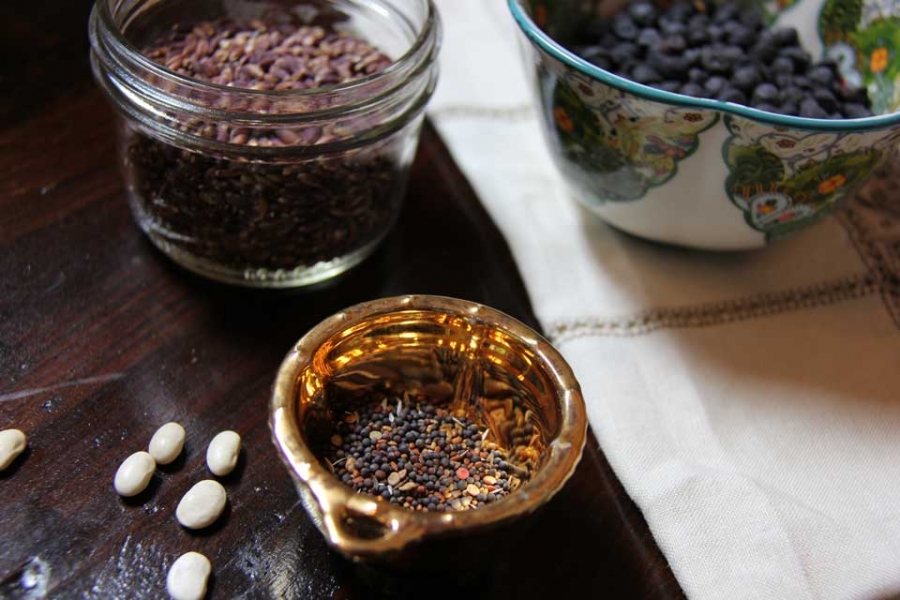 Sprouting at home is an economical and convenient way to boost your nutrition and avoid the pitfalls of antinutrients in grains, nuts, seeds and legumes.

Sprouts are the infant stages of many commonly consumed vegetables, beans, greens and grains, and are rich in nutrients. While sprouts may not appear on the menu for many American households, they are inexpensive, easy to grow, tasty and well worth the minimal effort.

Sprouts are an excellent source of antioxidants, essential fatty acids, fiber, vitamins, minerals and protein.  There are two kinds of sprouts.

Why you should always sprout nuts, grains, beans and seeds

Seeds are the babies of plants, and plants go through a lot of trouble to make them. In order for these seeds to do their job and grow into new plants, they must resist being digested, and remain in a dormant, viable state until conditions are just right for them to grow. While many seeds, nuts, grains and beans are filled with potential nutrition, nature has bound up these nutrients with compounds that can actually sicken us and cause malnourishment by preventing our bodies from metabolizing certain essential minerals and vitamins.

Germinating the seeds in warmth and water gives the signal that it’s time to transform from one state—the dormant, indigestible and self-protective state—into the digestible plant state. This disables many of the antinutrients and boosts the nutritional content and digestibility of the seed.

Antinutrients such as saponins and lectins are commonly found in seeds. When consumed by humans in this state, health problems with the GI tract may be the result, including leaky gut and damage to the intestines. It is important to note that while these antinutrients are found in many seeds, there are safe ways to reduce or eliminate them.

Sprouting increases the breakdown of harmful antinutrients, neutralizes enzyme inhibitors and inactivates carcinogens found in grains. Sprouting, fermenting or soaking seeds are the most common ways to combat antinutrients without losing the healthful benefits of the intended sprout. In fact, as long as water pH levels and soaking methods are correct, antinutrient levels can be reduced by as much as 50 percent.

Antinutrients act as their name suggests, prohibiting our bodies from properly absorbing nutrients present in food. Here are some of the most common forms of antinutrients:

Phytate: Stores phosphorus in nuts, seeds, grain and legumes — phytate is a self-defense mechanism. Phytate blocks zinc, calcium and iron from being absorbed in the GI tract, and in high quantities is known for stunting growth. Foods containing phytate may be cooked, soaked or sprouted to reduce this antinutrient.

Enzyme Inhibitors: As the name suggests, enzyme inhibitors block the human body from absorbing enzymes during digestion. These inhibitors are commonly found in raw soy and nuts, and can cause GI problems and protein deficiency.

What are the health benefits of sprouts?

Alfalfa: Considered the most popular sprout variety, alfalfa is rich in chlorophyll, Vitamins A, B, C, D, E, G, K and U, calcium and iron. Alfalfa sprouts are thought to house every vitamin necessary to support the human body.

Broccoli: Broccoli overall has been named one of the most healthful foods that humans can consume. Not surprising, broccoli sprouts have been proven to have plenty of health benefits including potentially fighting cancer. Broccoli sprouts are rich in nutrients that, according to the Journal of the National Cancer Institute, can reduce the risk of certain cancers by as much as forty percent.

Sunflower: Sunflower sprouts are rich in lecithin and Vitamin D, and are helpful in breaking down fatty acids for digestion.

Mung Beans: Raw mung bean sprouts are rich in Vitamins C and K, folate, magnesium, potassium and amino acids. According to the Linus Pauling Institute, these sprouts are particularly rich in Vitamin K, which is an essential part of blood clotting, and contributes to a healthy cardiovascular system.

As people wake up to the fragility of a global agricultural system dependent on oil, they are turning their focus closer to home—and finding abundance in their own backyards. We explore three examples of urban backyard food gardens and the surprising amount of food that can be grown with very little space. Read more
Can you and your neighbors produce a complete diet for the community from your own home gardens?  Own Dell believes so, and gives his tips for defining, organizing and creating your own hyper-local foodshed. Situated on some of the most fertile land, many suburbs have a legacy of once being… Read more
If you live in a cold winter climate, you may think eating local in the winter means a lot of jarred, canned, frozen and dehydrated food. While preserving food is part of a well stocked winter pantry, you can grow your own fresh food in the winter as well. Here… Read more
16 Jun – Cooking / Cooking / Nutrition