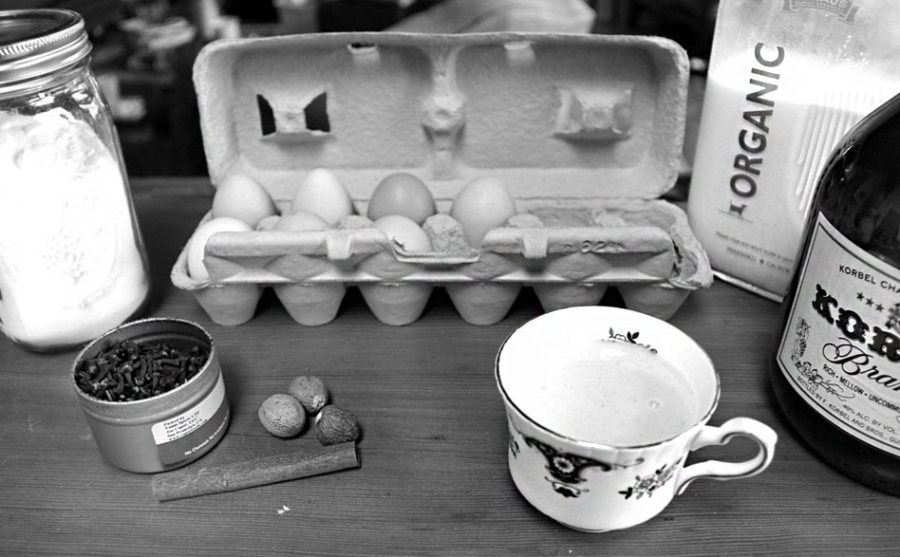 Despite the tradition of having a cup of eggnog at a Christmas party, or perhaps at the hearth of a roaring fire, this rich and creamy wintertime beverage is in fact seasonally out of place.

From posset to eggnog

From its name to its recipe, the traditional holiday drink of eggnog has evolved over time.  Historians have traced the drink’s origins back to the 14th century where a beverage named “posset”, a mixture of hot curdled milk and ale or wine, which could be sweetened and spiced, appears to have been enjoyed amongst the English.  Over time, eggs were added to the beverage as well as stronger liquors.  As far as the evolution of the name from posset to eggnog, historians have only been able to speculate.

WHAT’S IN A NAME?

Grog: Although the drink traditionally came from the Old World in many variations of combining milk and wine together, it was in colonial America, where rum was abundant, that hard liquor was added to its recipe.   One theory poses that eggnog derived its name from this addition of rum, commonly referred to as “grog”, and would then be ordered as an egg’n’grog.

Nog: Another theory suggests that the “nog” came from the word “noggin” which was a small wooden mug that drinks would traditionally be served in if one sat at a table in a tavern.  Still others believe that the Norfolk slang “nog”, which was used to describe strong ales, can claim the origin of the name.

Still, the origin of the name eggnog remains a mystery.  It may have very well been a combination of the two terms—a shortened version for ordering an egg and grog in a noggin, which I dare you to try to say after having a few!

From “egg’n’grog” to “eggnog flavored milk”

There has long been a fear of raw eggs in America.  Indeed, unlike most Europeans, Americans refrigerate their eggs, despite the fact that they are shelf stable.  The FDA (Federal Drug Administration, US) can be zealously cautious when it comes to raw foods, especially when it comes to meats, dairy and eggs.  Due to the large amount of eggs traditionally added to eggnog, the FDA has changed the beverage’s definition multiple times to accommodate a recipe that uses artificial replacements for the raw ingredient.  Today, the FDA’s definition of eggnog allows manufacturers to create a recipe that can contain a minimum of 1% egg yolk solids and milk or “milk products”.  “Eggnog flavored milk” can contain less than 1% of these ingredients.

Furthermore, a common ingredient in store bought eggnog is spray dried eggs.  The spray drying process removes all water content from the egg “in such a way that the valuable constituents are not only unaffected but even further refined,” states a major process engineering company.  How removing all of the water from an egg can further refine it is a mysterious concept to ponder.

Eggnog: “a milk product consisting of a mixture of milk or milk products of at least 6.0 percent butterfat, at least 1.0 percent egg yolk solids, sweetener, and flavoring.”

Rarely, if ever, do people think of eggs as a seasonal food.   The most common stimuli that affect egg production are decreasing day length, disease, broodiness, poor nutrition and stress. (When a hen is broody, that means she wants to hatch her eggs).  On a tour of Bobby Foehr’s Coastal Hill Farm, he gave me an example of just how sensitive hens are to stress.  Once on the farm, a hawk swooped down and caught one of his hens who was dustbathing in the field.  The rest of the flock witnessed this tragedy and ceased laying eggs for the following ten days.

The average commercial hen, the White Leghorn, lays roughly 265 eggs per year.  Generally, the more exotic the breed of hen, the less prolific its egg production will be.

Most often, however, it is the decrease in daylight which happens from the time of the summer solstice (around June 20th) to the winter solstice (around December 21st) that triggers reduced egg production in hens.  This is because the change in daylight causes hens to molt—a naturally occurring process in which the hen ceases or reduces her egg production to reserve her energy for replacing old feathers with new ones as well as allowing her reproductive system to rest.  Molting can last up to several months and although this is a sign of a healthy hen, during the molt she will look rather shabby, with patches of skin exposed from the loss of old feathers.

In order to speed up the molting process so that the hen will return to egg laying, factory farmers have been known to induce stress by withholding birds’ food.  This starvation usually lasts 10-14 days, in which a hen can lose up to 25% of her body weight.  Another tactic employed in factory farms is to alter the artificial lighting in the hen houses, sometime leaving the hens in total darkness for weeks at a time before turning them back on, which triggers the hens to pick up egg production once more.

The most humane technique for dealing with molting, commented Bobby Foehr,  is indeed just that—deal with it.  For natural, humane egg farmers like Bobby, this means a loss of profit during the winter months.  However, this is the price some farmers are willing to pay in order to mainstain their high animal welfare values.

Read about our tour of Coastal Hill Farm

The next time you’re ready to cozy up next to the fireplace and knock back a few egg’n’grogs, you may want to consider drinking some mulled wine or a hot toddy instead.   The impact of demanding a non-seasonal drink, as with all foods out of season, greatly effects the farming industry and the practices they are willing to take on to meet that demand.

However, you may not have to give up eggnog altogether.  Thank goodness that not all hens molt at the same time. For a farmer who raises his hens naturally, egg production will still continue, just not in the same quantity.  Sourcing from a local egg farmer who employs such humane practices will ensure that if you are going to make eggnog over the holiday season, the eggs will have been produced from stress free hens who have been allowed to follow their natural internal cycle.

Read our Sustainable Kitchen Guides for buying dairy and eggs.

Looking for a real, traditional eggnog recipe made with whole foods? We’ve got a great one from Beets ‘n Bones.