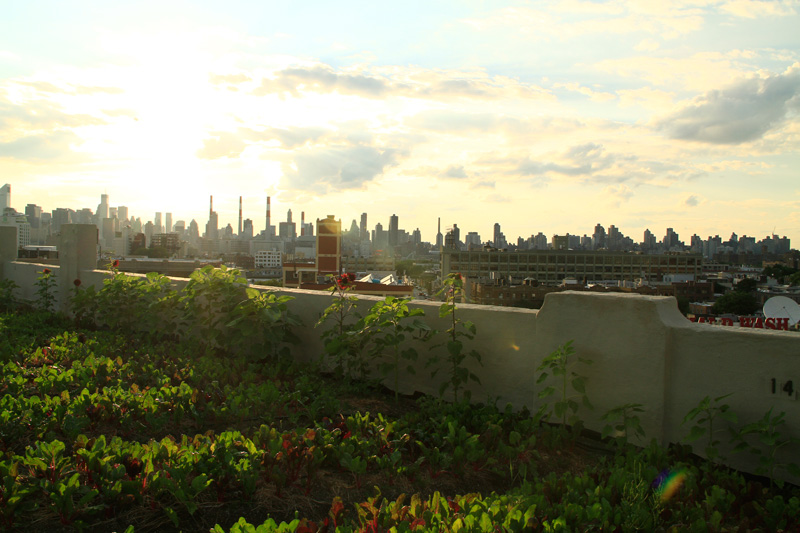 In cities, farmers are looking to rooftops to provide fresh food for urban populations.

One of the major environmental and aesthetic problems with urbanization is the lack of available open space and the distinctive absence of greenery in lieu of concrete and asphalt. One of the solutions that urban farmers have started to pursue is the use of rooftops as viable space to grow food. These rooftop farms are ideal for growing food because they have access to direct sun light for most of the day and they make use of previously underutilized spaces without competing for expensive land at ground level. In addition to providing healthy food to the local community, rooftop farming affords numerous other benefits to the local community and the planet. As a type of green roof system, rooftop farms reduce the urban heat-island effect by absorbing heat and solar radiation which reduces the energy required to provide cooling and heating. Storm water is better managed as rain water is absorbed into the soil of the rooftop farm where it is used to help grow the plants while simultaneously creating a safer living environment by reducing the hazards caused by excessive run-off and by filtering pollutants. Rooftop farms also increase biodiversity in urban areas by providing habitat for beneficial insects such as bees and other pollinators. As a local initiative in an urban environment, rooftop farms reduce carbon emissions by decreasing the distance food is transported to consumers and by adding more plants to the carbon cycle. The local economy also benefits by providing jobs for local farmers and keeping money from food sales within the local community.

An example of a successful commercial rooftop farm is Brooklyn Grange, located in New York City. Launched in 2009, Brooklyn Grange started with one 40,000 square foot (nearly an acre) roof farm in Long Island City Queens and in the spring of 2012 will add another 45,000 square foot rooftop farm in the Brooklyn Navy Yard for a total garden space of just around two acres.  Brooklyn Grange was included in a recent movie about urban farming, called Growing Cities. Brooklyn Grange used a variety of financing methods in their business model. Initially, their business was financed through a combination of private equity, loans, and grassroots funding events—including use of the crowdfunding website, Kickstarter.com. The expansion to their second rooftop farm was primarily financed through a Green Infrastructure Grant from the New York City Department of Environmental Protection. Besides securing funding, one of the biggest challenges Brooklyn Grange faced at the start of their business was to secure a suitable location for the rooftop farm. In order to be commercially viable, the rooftop farm needed a large flat rooftop with appropriate exposure to sunlight atop a structurally stable building that could accommodate the additional weight of a farm. Such a location was found and Brooklyn Grange negotiated a 10 year lease of the space, a rather novel situation for the first commercially viable rooftop farm in New York City. With the aid of local engineers and architects, the first Brooklyn Grange farm began construction in the spring of 2010. Before placing nearly 1.2 million pounds of soil for the rooftop farm, a root barrier, drainage mats, and felt were laid on top the roof to ensure that structural integrity of the building remained intact. Over 15,000 pounds of fresh, organic produce is grown by Brooklyn Grange and with the expansion to their second location, Brooklyn Grange hopes to double this amount. Thousands of plant varieties are grown including greens, herbs, carrots, radishes, scallions, peppers, garlic, mushrooms, and over 40 varietals of tomatoes. In the winter, cover crops like rye, buckwheat, vetch, and clover are grown. The produce is sold to local restaurants, at farmers markets, and through their Community Supported Agriculture (CSA) program. Although Brooklyn Grange is a business, community involvement and education is a key aspect of their operation. The rooftop farm offers tours of its facilities as well as a venue for private parties and corporate retreats.

Another successful rooftop farm is operated by the YWCA in Vancouver, British Columbia. The YWCA Metro Vancouver Rooftop Food Garden provides food to women and children at YWCA Crabtree Corner, a family resource center in Vancouver’s Downtown Eastside. This kitchen garden helps fill the void of fresh produce as most food donations to Crabtree Corner are of canned goods and other non-perishables. The rooftop food garden began in the summer of 2006 when YWCA Metro Vancouver staffers experimented with growing produce on the roof and eventually transformed the previous ornamental garden into a food-producing garden that yielded over 330 pounds of produce in its first season. YWCA Metro Vancouver recently partnered with the Society Promoting Environmental Conservation (SPEC) to create a new training program titled the Urban Farmer Field School (UFFS), where students learn about a variety of topics including small-farm business, sustainability, urban chickens, soil management and seed-starting.

Potatoes on Rooftops: Farming in the City

Green Roofs: A Guide to their Design and Installation 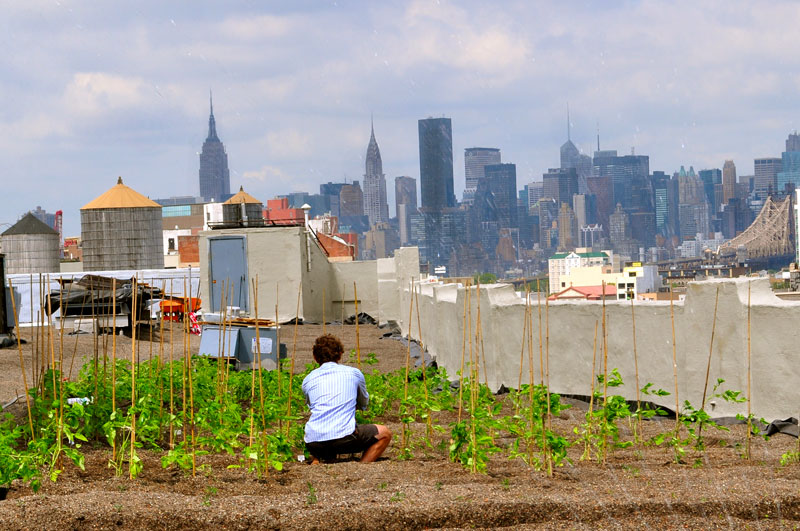