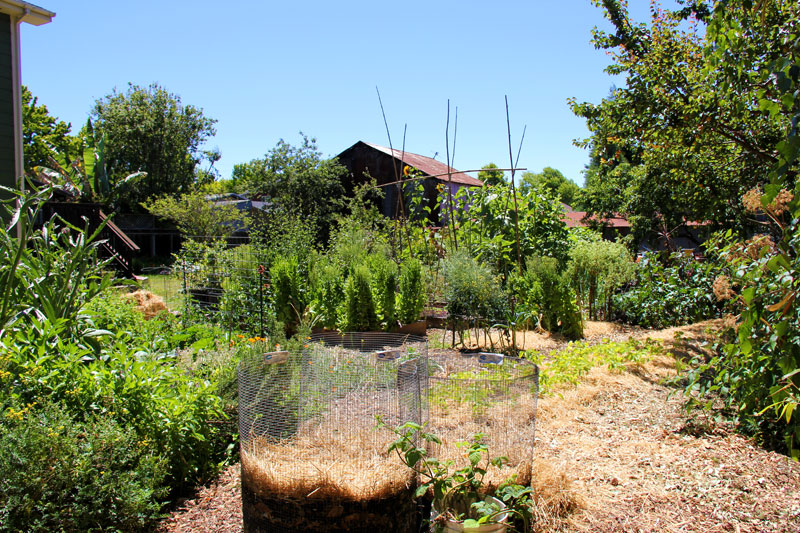 As people wake up to the fragility of a global agricultural system dependent on oil and chemical inputs, they are turning their focus closer to home—and finding abundance in their own backyards.  We explore three examples of urban backyard food gardens and the surprising amount of food that can be grown with very little space.

As the need to make our lives more sustainable grows ever more pressing, people have been looking to their home gardens and seeing the potential for more than just aesthetics.  Lush green lawns, which consume over 270 billion gallons of water each week in the US alone, are being converted into prolific backyard farms which produce enough food to not only sustain a family, but neighbors and friends as well. You may think you need a very large garden space, but urban home gardens are springing up on the smallest of lots.  When designed thoughtfully, they can yield an amazing amount of food.

Shattuck Farms lies in the foothills of North Berkeley, California, where Willow Rosenthal, founder of City Slicker Farms in West Oakland, has collaborated with neighbors to start a community supported agriculture (CSA) membership within the space of a single backyard.  One of the most prevalent barriers to urban farming is acquiring land for the purpose—and Willow decided to turn to her neighbors for support. Shortly after moving to North Berkeley, Willow posted flyers around her neighborhood offering her services as an urban farmer to transform someone’s backyard into a productive farm in exchange for use of their land and a majority of its harvest. One of Willow’s neighbors accepted the proposition and offered the use of her 1,020 square foot back yard—650 square feet (60.4 sq m) of which has now been converted into a productive, intensively cultivated micro-farm funded through the establishment of a neighborhood CSA. CSA programs spread out start-up and maintenance costs amongst its supporting members.   Through this style of intensive farming and co-op funding, the farm is able to sustain the 5 families that subscribe for 44 weeks out of the year—as well as provide a living wage to the professional urban farmers, such as Willow, who manage the farm.  Depending on the season, this small growing space requires anywhere between 10-17 hours of labor a week. Willow has found other ways of garnering community support for the farm beyond the CSA.  To gather materials to build compost which enriches the farm’s soil, Willow occasionally posts notices around her neighborhood listing certain days that she will collect garden clippings, which would otherwise be picked up by the city and brought to an industrial composting site.  Willow has also collaborated with local cafes to pick up bins of used coffee grounds and tea leaves. As Willow put it during a tour series of backyard farms hosted by the Oakland Institute on Urban Homesteading: your farm will require either time or money.  An urban farmer will either look to spend the money to buy items like compost or they will spend the time to gather the materials to make it themselves. Willow is a co-author of The Essential Urban Farmer

Over the years, urban farmer Courtney Everett has undertaken a variety of projects, ranging from working on large scale farms to educational programs which teach children about the basics of plant growth and ecosystems.  Recently however, her interests have turned to converting backyards and other urban spaces into bountiful edible paradises—a concept which her new business, Dirty Boots Gardens, is based upon. “People think that growing food or green spaces is saved for parks or farms.  But really you can use so much of the city, every square inch, to produce something,” commented Courtney. A typical 20 x 40 foot backyard (roughly 7 x 10 meters) can be set up in one day and requires around 6-8 hours of work every two weeks.  After initial set up, Dirty Boots offers consultation on gardening methods specific to a homeowner’s garden as well as advice on when to plant certain items. Growing edible landscapes connects people with the production of their food and provides the satisfaction of knowing how to sustain oneself, one’s family, and even the community.  Backyard farms can produce an abundance of food—the surplus from which some have established free weekly neighborhood produce exchanges, while others have decided to donate their extras to low income families or similar food programs. Through her business, Courtney advocates backyard farming as something that is not just accessible to those with a green thumb, but even for those who simply wish to see their space go to good use. “A lot of the yards that we’ve gone in to install a veggie garden were just weeds and hadn’t been utilized in years.  We have the ability to take something that was blighted and make it productive and beautiful.  Not only does that benefit the homeowner—to look outside to a functional piece of land—but also the property value of their house.” Dirty Boots has created a platform through their website for urban gardeners to  connect and share gardening information with one another.  Courtney said that she hoped to see neighborhood communities coming together for a harvest dinner, made from the produce grown in their own home gardens.

Kristen Stromberg always dreamed of having a small plot of land on which she could build a modest farm.   After setting down roots in Berkeley however, the chances of her moving to the countryside to raise chickens and grow her own food seemed unlikely. Kristen decided to bring the rural to the urban and convert 1,750 square feet (162.5 sq m) of her small house into an edible garden. The garden was designed by Planting Justice, a non-profit organization of permaculturists and landscape artists dedicated to food justice and the creation of sustainable food systems in the Bay Area.  On top of coordinating dozens of communal garden projects, creating local jobs in agriculture, and running educational youth programs, Planting Justice funds subsidized gardens for low-income families through landscaping projects like that of Kristen’s small Berkeley garden. To build a plan for what will go into an edible garden, Planting Justice provides the owner with a list of plants that are suited for the space and climate of the yard.  Today, where a clutter of shrubs once grew in Kristen’s front yard now thrives a variety of vegetables, herbs, and bee-attracting flowers.   In the backyard, chickens and rabbits run in and out of a coop made from a recycled fence and repurposed excess construction materials. When it turned out that some of the items that Kristen chose for her garden were not suited to her taste, she found neighbors with whom she could swap her unwanted produce for items grown in their gardens that she did enjoy.  Establishing a produce swapping network of home growers can also benefit an urban gardener in the case of crop failure.  A poor harvest of tomatoes in your yard does not necessarily mean that you will have to go all season without them. Berkeley has recently passed ordinances making it possible for home gardeners to sell any surplus produce from their yards.  Kristen can now sell any extra eggs from her chickens or honey from a hive she’s partnered with a neighbor to house in their yard.

You Can Farm: The Entrepreneur’s Guide to Start & Succeed in a Farming Enterprise

The Resilient Gardener: Food Production and Self-Reliance in Uncertain Times

Stocking Up: The Third Edition of America’s Classic Preserving Guide