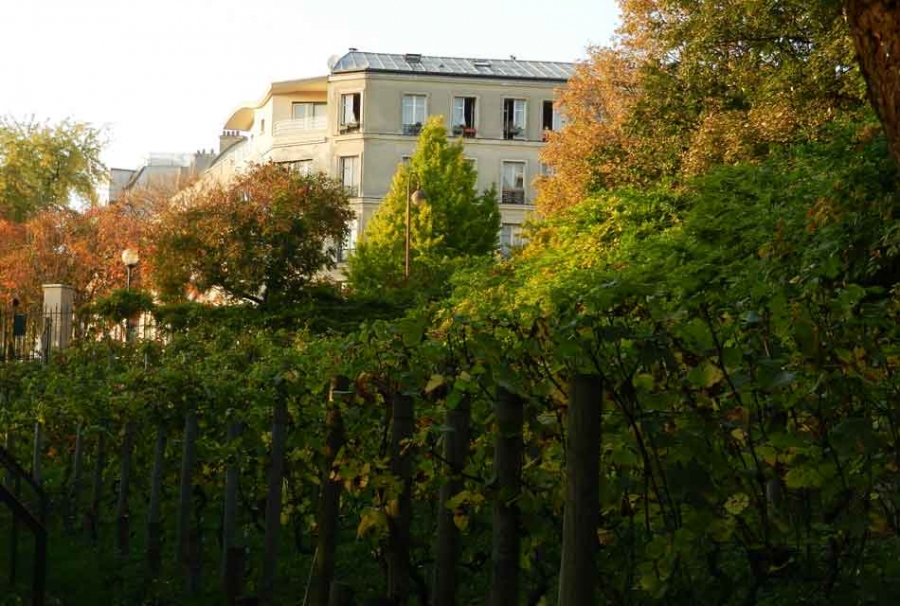 Unlike American vineyards, which are most often tucked away among rolling hills outside of populated areas, France has embraced the culture of the vineyard, and keeps it close to their heart. Agriculture has long been an important part of European culture, and urban vineyards are no exception. One key difference between France and America is that France chooses to preserve their rich culture and history of agriculture, while America attempts to add urban agriculture into the mainstream. Even in populous areas such as Paris, France is continuing a generations old tradition of preserving agricultural heritage.

Paris has a long, rich history in winemaking. From as far back as the thirteenth century, Paris has produced a wide variety of grapes from various areas in the greater Paris area. Urban vineyards comprised much of the city area of Paris until the eighteenth century when urbanization began to soar. A few of the most well-known urban vineyards include:

History of the Montmartre Harvest Festival

Montmartre is a neighborhood in Paris comprised of cobblestone streets, vine covered buildings, and colorful awnings and shutters. Nestled within this neighborhood is Vigne du Clos Montmartre, the oldest vineyard in Paris still in operation. An important piece of Parisian culture, the vineyard has remained a source of inspiration and celebration.

The Vendanges de Montmartre (Montmartre harvest festival) is an annual event celebrating the history of Parisian wines and the sanctity of the last remaining vineyards in Paris. With wine having long been an icon of French cuisine and the romance that surrounds Paris, it is no surprise that there are still 132 vineyards in the greater Paris area. Even so, there are only 10  inside the city limits, which makes Montmartre even more of a cultural icon to be celebrated.

In order to understand the significance of the Montmartre harvest festival, it is important to understand the journey Clos Montmartre has traversed. The town of Montmartre once thrived on wine production, even hosting a temple in reverence to Bacchus, the Roman god of wine. Wine production dwindled during the period between the twelfth and twentieth centuries, and a bout of phylloxera in the early twentieth century nearly destroyed every crop. Phylloxera is an infestation of plant lice that destroys the leaves and roots. Said to originate in the United States with an introduction into Europe around 1863, phylloxera is devastating to grapevines.

Rich architecture and a classic, storybook village surround the site of the vineyard at Montmartre. The site was nearly lost to development in the early twentieth century until 1933, when the site was saved and the Mairie de Paris conserved the vineyards. Under French law, vineyards are protected from being built upon, which was the saving grace for Montmartre.

Since 1934, the Montmartre harvest festival has kept history and agriculture alive in Paris. Usually the second week in October, the festival provides a wonderful, creative backdrop for residents and tourists to sample Parisian culture and dedication to the city’s agricultural roots. Festivalgoers may enjoy a parade, music, folklore, tours of vineyards, auctions, and wine tasting.

One important part of the festival is that children are welcome and encouraged to participate in the festivities. Live music, an open air market with a variety of treats, and culinary specialties make the festival a hit with visitors of all ages.

Not only are children included in the festivities, so is the government. The Montmartre Town Hall is where the harvested bounty of grapes are stored, pressed, and fermented before bottling. It is said that the Montmartre Town Hall is the only government office in Paris that produces wine. Half bottles of wine are considered collectible, and sell for $50 each, with all proceeds going to charity.

Urban farms turn to crowdfunding websites to bring their projects to life. Since the 1950s, the global population has flocked to urban centers around the… Read more
Bringing food back to Denver neighborhoods marked by the EPA as hazardous waste areas. In just two years, The GrowHaus, a 20,000-square-foot Denver greenhouse and… Read more
Located in the heart of Paris, in the 6th arrondissement, is the Luxembourg Gardens. Built in 1612 to encompass the grounds of the palace built for… Read more
What would it take to create food security for an entire community?  This was the question that Pam Warhurst and Mary Clear sought to answer… Read more
Vacant lots in Philadelphia are getting a makeover. They are being turned into self sustaining urban edible food forests. Read more
Home to Henry Ford’s assembly line, Detroit was once affectionately referred to as Motor City—the epicenter of American car production.  With the recent collapse in… Read more
05 Sep – Urban Farming / Paris / Urban Farm