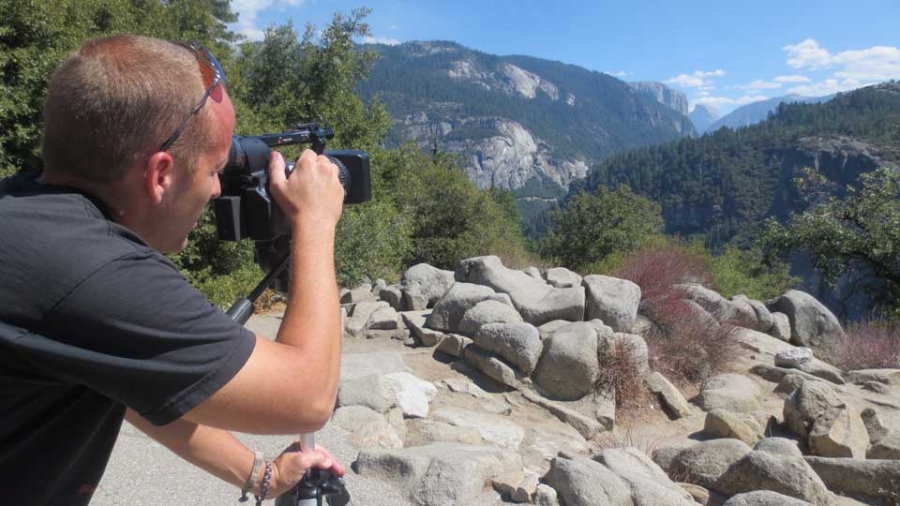 Questions about the harmful chemicals in his family’s food and household products lead documentary filmmaker Ed Brown on a very unexpected journey. Brown went to amazing lengths to uncover the truth about prolific chemical use in the United States, committing each interview and discovery to film. After speaking with everyone from Ralph Nader to the nation’s leading scientists, the result was Unacceptable Levels. This fascinating—and sometimes shocking—documentary shines a spotlight on the chemical revolution of the 1940’s, as well as the largely unregulated chemical use that persists today.

You once worked with famed documentary filmmaker Michael Moore, but before making Unacceptable Levels you were employed as a waiter. What inspired you to get back behind the camera and bring this film to life?

“It was a tough decision to make Unacceptable Levels; I put my whole life on the line. In the beginning it was just me—and the monumental task of somehow getting this information out into the world. I spent the majority of my time away from my family and was emotionally and physically isolated. I also spent a lot of our own money and continue to work three jobs to make ends meet. “Once I learned about the chemical addiction we all face, I had to do something about it. For me, that meant getting behind the camera and making this film. I never went to film school, but I spent several years teaching myself every single role in film production. I knew I had the ability to bring this issue to light, and I also knew it was going to be tough. I was inspired every day by the many people I was fortunate enough to meet on this journey. And all of the time, my family was in the front of my mind, even when they weren’t right beside me.”

Throughout the filming process you spoke with more than 40 different experts and covered thousands of miles. Where did you begin your research?

“My first stop was The Rodale Institute, which is only about seventy miles from where I live outside of Harrisburg, PA. The people there were simply wonderful, and I cannot ever thank them enough for their support and insight into the issues surrounding unregulated chemicals. “From there, one interview led to another. After I would finish one interview, almost routinely, I was asked if I had spoken to this person, and to that person. All of a sudden, I found myself traveling extensively from one interview to the next, compiling massive amounts of information about an even more massive problem.”

As you began to learn more about unregulated chemical use in everything from your children’s food to their toys, how did you change your own lifestyle to minimize your family’s exposure?

“First and foremost, we eat an all organic diet. I know some would say it’s simply not possible for most people to do that, and others may say it’s unnecessary. Personally, I view it this way: If there is a tomato that has pesticide, fungicide or herbicide residues on it and another tomato without it, which one would I want to eat and feed to my kids? The one without it, right? “This is a lifestyle choice for me. My biggest investment is not my house, my car, my television or anything else. It is and always will be my health. That is my top priority. It took years of making small changes to reach the point where we are today. Change does not happen overnight, but it’s important to remember that small changes lead to giant leaps.”

The film states that more than 80,000 chemicals are in production today. Throughout your research, what surprised you most about this massive industry and the way chemicals have been so deeply integrated into modern life?

“I was shocked to learn that many of the things we eat, drink, breathe and put on our bodies, are waste byproducts from industry. Learning about Sewage Sludge, or what they call ‘Biosolids’ was certainly one of the most surprising things, and something I had never thought of before. I mean, where does our sewage go?  Ask yourself that question right now, where does that stuff go? “It was shocking to learn that 3.5 million tons of this sludge is displaced onto farmland across the United States as fertilizer. And everyone needs to know that this sludge contains pesticides, PCB’s, DDT, mercury, lead and over 267 other contaminants. It’s hard to know what our farmland is going to look like after 200 years of doing this.”

What is the most common response you’ve received to the film?

“A blank stare is the usual response (laughs). No, I’m just kidding, but the subject matter certainly can be overwhelming, and even a bit depressing if you think about it. So, I guess I’m still surprised by the most common response I receive—a simple thank you—which is almost always followed by the question, ‘Where do I start?’ “That inspires me.  We have the power to create real and lasting change in this world. Each and every one of us can do something, starting right now—today.”

Unacceptable Levels has been celebrated at a slew of environmental film festivals from New York to San Francisco. However, do you feel it’s fair to label it as a purely “green” film?

“Well, if ‘green’ means environmentally friendly, I can see the film being labeled as such. In all honesty, ‘green’ is just a color, not a movement. Paul Hawken wrote, ‘While (people) are organizing themselves into the largest movement in the history of the world, the movement only happens one person at a time.’ “Unacceptable Levels is my attempt to give others a tool to educate the public about their cause and place in this movement, and to prioritize human health. What’s important here is that we all take a step back and realize that this is not about a color, catchphrase or marketing term. This film is for everyone alive on this planet today. We are all on this earth together and we are all facing the same problem of companies owning our health. “A movement like this can only be symbolized by the lives that are changed for the better.”

What are your thoughts on the recently reintroduced Chemical Safety Improvement Act?

“The Chemical Safety Improvement Act has a nice ring to it, but from what I understand it is yet another attempt to pass half-measures that ultimately will not change anything. “I think real change will happen when we the people can make clearly informed choices. Isn’t that supposed to be the backbone of our free market system? I believe in the right-to-know: the right to know what we are buying when we go to the store—from the food we eat, to the mattresses we sleep on to the materials we build our houses with.  No one should be allowed to buy something containing chemicals we know or suspect to be problematic. Plus, our kids can’t make choices about what paint is on the toy they are about to play with, or about the pesticides on the food that they are about to eat. “Let’s face it; if you go into a store and all of the chemicals that went into the products had to be labeled, you are able to make an informed choice—that is when our free markets are really working. However, we are not told about what we are buying and are in the dark on a lot of these issues.”

“Chemical regulation isn’t a hot topic for major media outlets. The issue only really makes headlines when it’s a single, isolated chemical—the ban of BPA in baby bottles and toys for example. “There is also no national discussion about low doses of unregulated chemicals in the environment or our bodies because we have no data to support it one way or the other. To pinpoint one chemical at a time, such as lead or asbestos is easy. To know how 400 unique synthetic chemicals are interacting with your cells and each other at any given moment is incredibly difficult. That is simply why it is not on the tip of everyone’s tongue at the moment. “GMO is a big issue that the public is aware of thanks to The Right to Know Campaign, The Non-GMO Project and other grassroots initiatives. Let’s face it; food is a very touchy subject for many of us because we all love to eat. Most people feel a sense of deprivation when something they enjoy may have questionable aspects, but they really don’t like it when their choices are no longer an option. “The issue with GMO’s is that the chemical industry is using seeds as a delivery system for selling chemicals, and there is a lot of conflicting information out there on the subject. I think avoiding GMO’s until there is definitive proof on the effects to our health and the environment is really the best approach.”

Unacceptable Levels mentions that labels like Safe, Natural and even Green on foods and household products can be extremely misleading. What should consumers understand about these vague terms to better protect themselves and their families?

“Safe. Natural. Green. What do any of those words mean? They are just used to market a product and make you believe you are buying something that is better for you and/or the planet. “When it comes to food, it’s simple—if you can’t pronounce an ingredient, you probably shouldn’t be eating it. If you need a degree in chemistry to understand the ingredients in your shampoo and personal products, they probably aren’t the best choice, either. Using the USDA Organic, QAI, Oregon Tilth or the National Organic Program certifications are all very trustworthy ways of finding what you may be looking for in the long run.

“Just start reading labels and asking questions, then you will become a part of the change we all need.”