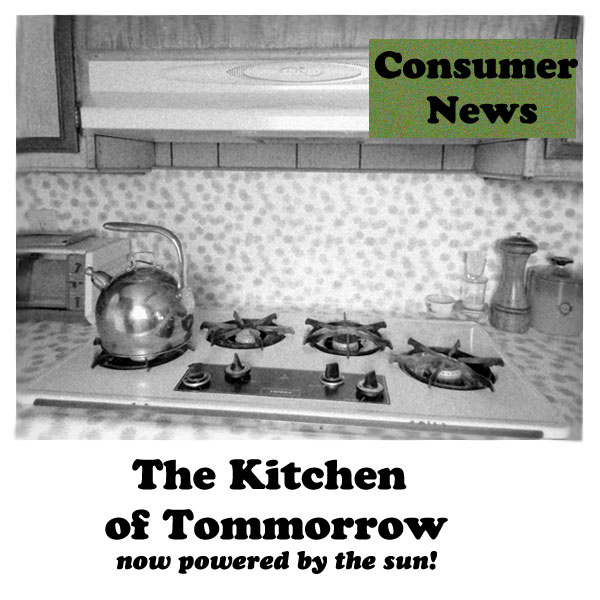 In the 50’s, the golden age of television gave us commercials showing what the kitchen of the future would look like.  It was equipped with futuristic conveniences which are now common place—ice-dispensing refrigerators, electric burners, and dishwashers. But what does the kitchen of tomorrow look like now that we are well on our way into the 21st century?  Although many of the solar powered kitchen devices I researched are fashioned for emergency purposes in the event of a power outage, in light of our dwindling sources of petroleum it does not take a stretch of the imagination to envision a kitchen run on alternative energy.

Most solar refrigerators are smaller than the conventional kitchen appliance, as they have primarily been designed thus far as coolers for emergency use or for those who wish to live off the grid.  I’ve found that many solar powered refrigerator manufacturers separate the refrigerator and freezer into two distinct appliances. Sundrazer’s Chest Style Solar Refrigerator comes in large and small sizes and range in cost from $1049-$1229.  Here are a few specs for two of their refrigerators:

Cost: in the $200’s, unless you want to make your own The concept of a solar oven is conveniently simple.  The oven merely harnesses the power of the sun through reflective surfaces which are focused on a pot or pan.  Solar ovens can effectively cook many foods, reaching in temperature from 300°F to 400°F (150°C to 200°C ), although some oven manufacturers claim that they are capable of 650°F (350°C). Using a solar oven to cook your food requires a different strategy of cooking than many of us are used to.  First of all, you are dependent on the availability of sunshine in your region and you must have a place outside in the sunlight in order to effectively cook your meal.  Second, because solar ovens run at lower temperatures than most conventional ovens, it often takes a longer period of time to cook a meal, functioning more like a crockpot than an oven.  This requires the preparation of the meal earlier in the day to allow for a more lengthy cook-time. You can buy one or you can make your own. Read our article on solar ovens plus an interview with Howard Godfrey, author of the book Emergency Preparedness & More.

Cost: $20-$60 Solar kitchen scales like one offered by Soehnle offers an effective, energy efficient method of weighing both food and fluid ingredients.

Cost: around $50 The SunRocket Solar Thermos is a portable solar hot water heater that can heat and boil water from sunlight and stay hot for hours. The thermos uses an evacuated tube which is boosted by reflective panels to heat the contained water.  This water heater not only works in the sunshine but in the snow as well.
03 Jan – Waste-Free Lifestyle / Energy