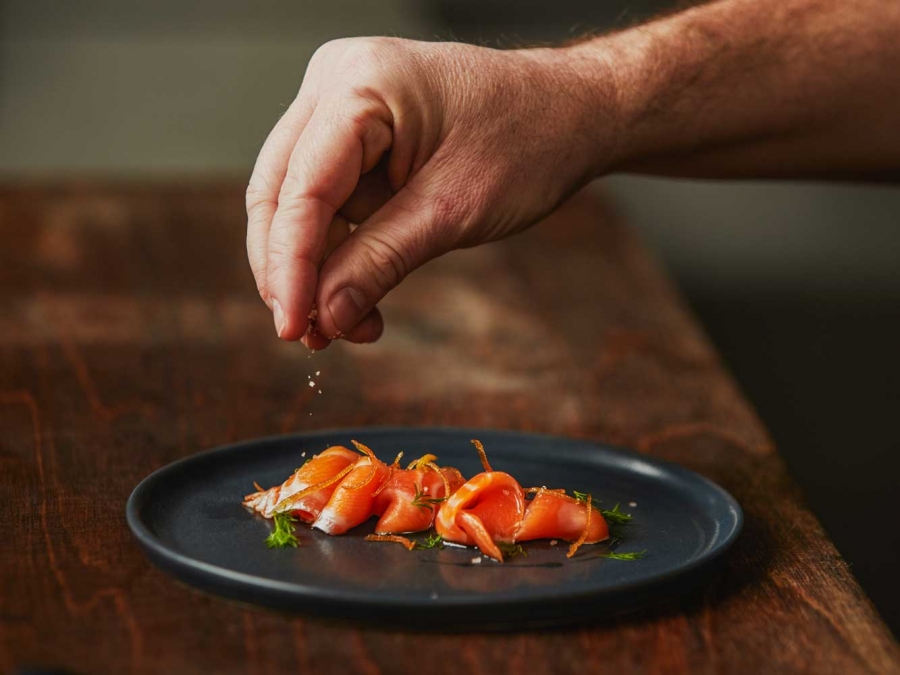 Sushi restaurants have lagged behind in adopting sustainable practices—and so have sushi consumers, who sometimes turn a blind eye to the overfished and endangered choices on their local sushi bar’s menu. High demand for seafood, including sushi, has led to widespread depletion of fish stocks throughout the world.

Bluefin tuna, for example, is considered a sushi delicacy and is in high demand for its dark, fatty flesh. However, it’s a species that is slow to reproduce and whose spawning grounds were further endangered by the BP oil spill in 2010. Its now considered critically endangered, with possibly as few as 9,000 bluefin left in the Atlantic ocean.

Even seemingly innocuous fish such as tako, or octopus, and unagi, or freshwater eel, are considered questionable choices. Octopi are often caught by bottom trawling, a fishing technique that is extremely destructive to natural habitats. Although unagi is a farmed fish, eels are not raised from eggs—rather, young eels are wild-caught and then raised in captivity, a practice that threatens wild populations. In addition, the farms release waste and parasites back into the environment, further endangering wild eels.

Bamboo Sushi is determined to set a new standard for doing sustainable business in serving sushi. The Portland, Oregon restaurant claims to be the first certified sustainable sushi restaurant in the world. It has won recognition and accolades from the Green Restaurant Association, Fish2Fork and the Marine Stewardship Council.

The restaurant takes pride in its impeccably sourced fish. Bamboo Sushi works in partnership with the Monterey Bay Aquarium and the Marine Stewardship Council to serve not only fish that is certified sustainable, but often locally caught. The menu changes seasonally, as fish is a seasonal food. Recent menus have included albacore caught off the coast of Oregon, wild-caught Alaskan salmon, striped bass from California and mirugai giant clam from Washington state.

The need for sustainable standards in sushi and seafood restaurants is urgent. Bamboo Sushi’s owner, Kristofor Lofgren, estimated to Good Business that “in a year, we will go through 4,000 pounds of albacore, 5,500 of salmon, 3,500 pounds of tuna. It’s probably eight tons of seafood that we serve.” And that’s the tally for just one small business in a medium-sized city.

But Bamboo Sushi’s commitment to sustainability extends beyond its menu choices. The restaurant purchases its electricity from renewable sources. Its bathrooms use low-flow toilets and energy-efficient hand dryers. Their to-go containers are biodegradable and their paper products are made from recycled fiber. Even their chopsticks are reusable and crafted from sustainably harvested teak.

With such meticulous attention to sourcing and other ecological concerns, you might expect Bamboo Sushi’s prices to be higher than the average sushi bar. But as it happens, the menu price point is comparable to the restaurant’s non-sustainable competitors.

Bamboo Sushi went one step further in its commitment to ecologically sound fish harvesting. They recently purchased, in partnership with the Nature Conservancy, 100 square kilometers of ocean off the coast of the Bahamas and established it as a “marine protected area” to help preserve the ocean’s ecosystems and provide a safe breeding haven for fish of all kinds. A second marine protected area in the Pacific Northwest is also in the works.

Bamboo Sushi’s business model has been successful enough to spawn several locations in Portland as well as in San Francisco. The original location, long popular with locals, is fast becoming a must-visit destination for visitors to Portland.

The US produces more than 100 aquatic species for consumption, making the management of these fisheries an important topic in both environmental and ethical terms. As the demand for sustainable seafood increases, so has the focus on sustainable seafood practices in a chef’s culinary education. Read more
Restaurants with their own farms gain a unique appreciation for what it takes to produce quality food. Chef Alex Seidel has gotten a lot of positive attention for his expertly prepared, eco-conscious cuisine at Denver’s Fruition Restaurant. The Wisconsin native was recognized in 2010 by Food and Wine Magazine as… Read more
Dai Due, based in Austin, Texas, has a lot of figurative irons in the fire. They’re a farmer’s market stand. They’re an educational organization. They’re a butcher shop. And sometimes, they’re a supper club. Read more