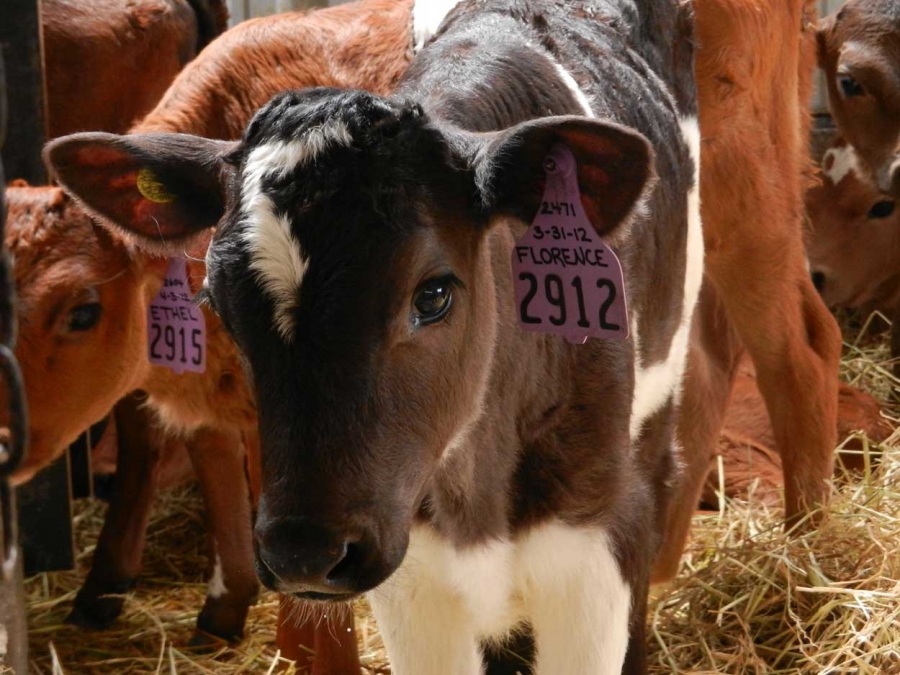 Eden Canon takes a tour of the Straus Family Creamery and talks to Albert Straus about the future of organic dairy farming.

Where many people may have a lawn or small garden, the steps leading down from the house of Albert Straus give directly onto a pasture of very pregnant dairy cows—as well as dazzling views of Tomales Bay.  It was here in Marshall, CA that my tour of the Straus dairy farm, which stretches out just behind the family house, began.

Today, the dairy processes 275 cows, twice a day—a far cry from the original 23 that Albert’s father, Bill Sraus, founded the dairy on back in 1941.

The Straus Family Creamery takes pride in providing an extensive line of organic dairy products.  When I asked Albert in an interview why he decided to get the dairy certified organic, he explained.

“We became the first certified organic dairy west of the Mississippi River in 1994.  My parents worked their entire lives to keep the farm in agriculture and dairy.  My mother, along with her friend Phyllis Faber, were the founders of the Marin Agricultural Land Trust to preserve the land.  They helped start organizations to keep communications between the farmers, the environmentalists, and government agencies working towards the same goals,” said Albert.

“So to do organic was kind of a natural progression.  We hadn’t used any herbicides for around 25 years prior to going organic, and we hadn’t used any commercial fertilizers for more than a decade prior to that.

“It was in our philosophy as well.  It was something that we believed in,” Albert concluded.

Continuing our conversation about organics, Albert divulged his personal motivation for pursuing an organic creamery.

“Someone actually approached me in 1990 about making organic milk for ice cream—and ice cream was something that I really had a weakness for.  It was what I wanted to make, so I kept looking into what organic was.  It took me three and a half years to actually start up the creamery and another ten years before I started actually making ice cream—but it was a big motivator.”

As a buy-ten-get-one-free card holder for Bi-Rite Creamery in San Francisco—which sources all of its milk, cream and eggs from the Straus Family Creamery—I understand Albert’s motivation completely.

Just say no to GMO

My tour continued to the grain mill and silage mound which are used to create the ingredients that supplement the cows’ grass diet.  Most organic, pasture-based dairies use a combination of grass and grain in order to bolster their cows’ ability to meet the demanding process of modern milking, as well as to combat the seasonal unavailability of grass.

Read our article about the seasonality of milk.

“I think there was one period of time when the conventional dairy industry tried to push more and more milk from cows by using more grain and less forages.  And now for organic, it is going back to more forages and less grains,” commented Albert.

Despite the growing demand for organic grain to feed both organic dairy and beef cattle, there is an alarming worldwide shortage of it.  In my interviews with livestock farmers across America, this shortage of organic grain was stated to be one of the major factors driving up the prices of organic animal products.

Furthermore, many of the organic grains available to livestock farmers have been found to contain GMOs, the contamination of which many organic grain farmers have had an increasingly difficult time preventing.

“I discovered GMOs in our certified organic corn about seven years ago and it took me about two years to start my own verification program to test that there were no GMOs in our feeds.  We became the first dairy in North America to be verified under the Non-GMO Project.  We have the Non-GMO Project logo on all of our products.”

Albert Straus has been a strong advocate of the movement in California to require all products containing GMOs to be labeled.  In a speech he gave at the final Right2Know rally on October 16, 2011 in Washington DC, he stated:

“Now it is time for consumers and farmers to demand mandatory labeling of all genetically modified crops and foods. It is consumers who make change happen in this country. Consumers who choose locally grown and organic foods can educate our communities, by demanding mandatory GMO labeling, which will empower people to make healthier and safer choices. It is my belief that organic choices will help sustain family farms everywhere.”

The next part of the farm tour was probably everyone’s favorite—the pens which house newly born calves.  My tour guide informed me that Albert names all of his cows after friends and family—seeing that his dairy includes 600 cows, Albert must have a lot of friends.

Calves are penned shortly after birth because, as many dairy farmers will tell you, the instinct for dairy cows to raise their young has long since been bred out of them.  The calves are kept in group pens where they have unlimited access to fresh milk, rather than the supplemental milk formula you’ll find at a conventional dairy.  This fresh milk is dispensed by a machine that reads a chip implanted in each calf’s ear to monitor when they are supposed to be weaned.  At 5-6 months old, when these calves are released into the dairy herd, this chip will track how much milk each cow produces in order to determine which cows will be most profitable to breed.

Finally, the pièce de resistance came at around 3:30 when it was time for the cows’ second milking of the day where they are relieved of roughly 5 gallons of milk.  A funny fact that I came across on my tour is that the cows methodically line themselves up to be milked in the same order every day.

The Straus operation aims to be as resourceful as possible.  Waste water created from yogurt production is combined with clean water, and after undergoing reverse osmosis, is used to clean equipment at the creamery.  The waste water from this process is then trucked to the dairy where it is used to clean out the milk barn twice a day as well as to water and fertilize the 660 acres of pastureland on which the cows graze.

Since water used to make dairy products is eventually used to irrigate the dairy’s pastures, the cleaning supplies at the creamery are carefully chosen to have the least environmental impact.  As high levels of sodium can be toxic to plant growth, Straus uses potassium based cleaning products instead.

Perhaps one of the most interesting  technologies used on the Straus dairy farm is the methane digester, which turns the manure washed from the milking stalls into energy.   First, the solids of the manure are separated out and used as fertilizer for the pastures, while the liquids go into a covered lagoon.  The methane released from the anaerobic decomposition of the liquid is captured by a tarp covering the lagoon, and is transferred to a combustion engine which fuels a generator to create electricity.

The methane digester creates electricity to power all of the dairy’s energy needs—and with electricity to spare, which the farm is able to sell back to the grid.  Even the heat created by the combustion engine is used to heat the 180 degree water that flushes out the manure from the milking stalls.

“The methane digester takes a greenhouse gas out of the atmosphere that is 23 times more detrimental than CO2, carbon dioxide.  It greatly reduces odors, and it helps keep the fly population down,” Albert noted.

It must be said, for a dairy farm which processes 275 cows twice a day, the farm was remarkably absent of flies.

At the end of our interview, I asked Albert what he felt was the most significant challenge faced by the organic dairy industry today.  He stated that there was a big learning curve to raising cows organically and that the transition process could be very daunting as farmers have to abandon the use of conventional tools—or as he referred to them, crutches.

As customers, Albert emphasized the importance of education—to understand where food comes from and what goes into making it.  The Straus Family Creamery exemplifies this by opening its doors and encouraging people to take a tour of the dairy.

“I think it takes more education and understanding of what the cost of food actually is, that most conventional products are subsidized in some way, and that these products aren’t necessarily good for you in the long term,” stated Albert.

And I believe that Albert has a really good point here.  Food, after all, doesn’t just come from the shelf—it is part of a larger, more complex system that involves proper land usage, animal welfare, and sustainable cultivation and inputs.

“Our mission,” Albert ended with, “is to sustain local, family farms that produce the highest quality, minimally processed product with no additives if at all possible.”

Have your read our Sustainable Kitchen Guide for buying humane, healthy and ethical milk, cheese and dairy? Find it here.

Devil in the Milk: Illness, Health and the Politics of A1 and A2 Milk

Sweet Cream and Sugar Cones: 90 Recipes for Making Your Own Ice Cream and Frozen Treats from Bi-Rite Creamery