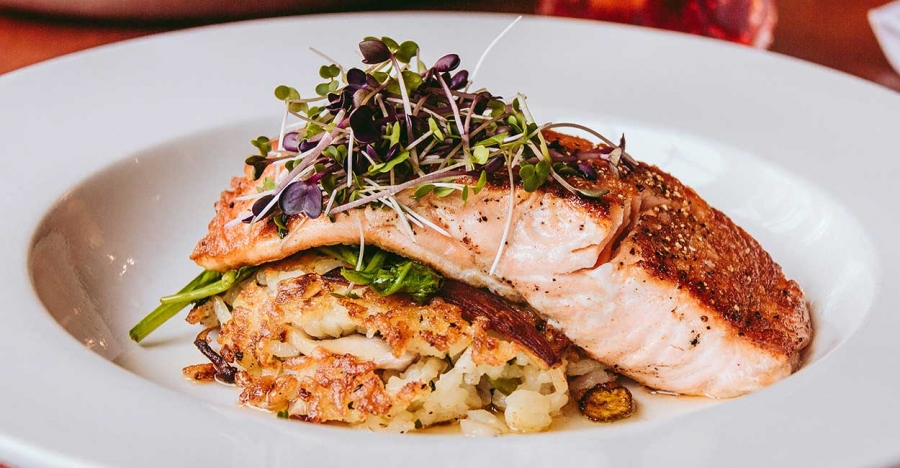 As the demand for eco-friendly fish increases, so has the focus on sustainable seafood practices in a chef’s culinary education.

Leigh Belanger, the program director from Chefs Collaborative commented, “They [chefs] are really motivated by awesome ingredients, and the most awesome ingredients are the ones that have been raised or caught sustainably and responsibly.”

She went on to say, “I think for diners it’s sort of the same.  They don’t want to eat the last bluefin tuna.”

The ocean covers 3/4 of the earth’s surface, housing thousands of different species whose ecosystems are heavily impacted by the fishing and farming practices we engage in.  According to the State of Seafood report released by the Monterey Bay Aquarium in 2011, only 7% of coastal governments worldwide use scientific assessments of the environmental impact of fisheries as a basis for their fishery management policies.

The report goes on to state that “No area of the ocean remains unaffected by human activities which range from commercial fishing to global climate change.”  It is this reality that has motivated individuals to take responsible fishing seriously.

Fishermen are working to promote sustainable seafood. Trace and Trust, a farm or ocean-to-table tracking program established in 2010, is a collaboration between fishermen, chefs, distributors, processors, and restaurants to provide transparency about where seafood has come from.

The tracking system provides a code for each batch of fish caught or farmed, which may be provided on a restaurant menu, on the plate itself, or upon request from the kitchen staff.  Either by scanning the code with a mobile phone or by typing it in at the Trace and Trust website, a diner can find out when, where, and how their fish was caught—even providing an extra level of accountability by listing who caught it.

There are two forms of farming fish: open net and closed containment farms.  Open net farms are the most environmentally damaging, as the byproducts of farming—pesticides and antibiotics, uneaten food, fish waste, and disease—can easily be released into the surrounding area.  Uneaten fish feed and amassed waste can cause algal blooms, depleting the surrounding water of oxygen—a process called eutrophication.  The resulting lack of oxygen may produce amounts of ammonia, hydrogen sulphide, and methane which are toxic to many types of aquatic species.

Executive chef, Kevin Weber, of Cliff House in San Francisco commented on his restaurant’s commitment to using sustainable fish. “We investigate the individual farms and we move to different purveyors as they improve their techniques.  Years ago they would just put it at the mouth of the river.  If they do that now we’re not anywhere near it.  We want an outside pen.  We don’t want any antibiotic build up.”

I haven’t served a Chilean sea bass here in probably 19, almost 20 years since I became chef because it is not a sustainable product.  It’s my favorite fish in the world.  I remember when I gave my parents their last meal and said this is the last time you’re going to eat it.

Closed systems are preferable to open net farms because, if built with proper filtration and waste systems, byproducts can be managed with the least amount of harm.

Is wild caught the answer?

One may be thinking at this point that wild caught fish are the answer to this dilemma.  However, this method, too, is fraught with difficulties.  One of the destructive effects of fishing is called “bycatch”, which is when fishermen are targeting a specific species but in the process catch others in their nets.  The depletion of aquatic species can happen either by overfishing, bycatch, or what is called ranching wild fish, a recent trend in which farmers catch young wild fish and raise them instead of using fish from eggs.

Kevin Weber commented, “We get wild salmon when wild salmon is available but there is honestly not enough wild salmon in the world to support the demand.  So we have to learn how to farm.”

The future of sustainable fishing is looking to closed containment farming, such as the one created and used by Australis, which employs its own patented close containment, land based, farming facilities to produce barramundi, an Asian sea bass.  Australis recycles and purifies 99% of their water and donates their fish waste byproduct as fertilizer to local farmers.  Their facilities use a series of connected tanks that vary in size as the fish grow, and which monitor the number of fish to prevent overcrowding.  The Australis farm in Massachusetts alone can produce up to two million pounds of fish annually while only creating 15lbs of solids a day, which is the equivalent amount created in three average American households.

Education on the consumer’s end has a large part to play in the push for sustainable seafood.  Keeping up-to-date on the issues in the seafood industry is important as an overwhelming variety of aquatic species bred or caught for consumption are affected differently by farming and wild catching practices.

Clear labeling on menus is a point of integrity for restaurants serious about a sustainable seafood policy.  At Nick’s Cove, a restaurant overlooking Tomales Bay, California, roughly 80% of their of their ingredients are sourced locally.  The distinctions are clearly indicated on their menu.  Executive chef, Austin Perkins, explained, “We strive to source whatever is local and in season. As a seafood restaurant we are expected to, and we want to, serve fresh seafood.”

“Because seasonality is such a significant factor in fresh fish, there are times we must go outside of the area to source seafood (scallops, mussels, lobster) and when we do, we are careful that we do not hide that fact. For the most part, our patrons understand the reasons why we might have fish that was not sourced locally.”

If, after reading the menu, there remains any uncertainty about where the fish came from, diners are urged to ask.  If a restaurant has a sustainable fish policy, wait staff will be educated and able to answer questions clearly.  If your question is met with a blank stare, beware.

Leigh Belanger commented that change starts in the kitchen.  When a diner practices ethical choices at the grocery store and remains informed about the types of seafood they are eating—where it comes from, and how it was harvested—they create what Leigh referred to as an “ethical food literacy.”

Not the chicken of the sea

The challenge with sustainable seafood is that there are no blanket requirements that can be applied to how fish are raised or caught, as can be applied to meat.  Free range, fed organically, raised without antibiotic treatment, etc., are easily used as a basis for sustainable and ethical farming practices with animals such as cows and chickens.  However, blanket requirements cannot apply to all varieties of seafood.  For example, although open net farms are harmful to the surrounding environment, this is not true when applied to oyster farming.

Oyster farming does not produce harmful byproducts because they feed on naturally occurring phytoplankton and algae, meaning no food additives are necessary. Neither do oysters require fertilizers or chemicals to thrive.  Furthermore, oysters act as natural filters, removing nitrogen and detritus, promoting water clarity and allowing light through to increase grass bed growth, which supports important marine life.

Just as with meat, the first level of sustainability came with certification and labeling which identified ethically raised and sustainable products. Sustainable seafood practices will require a new level of engagement from the diner, the chef, the fisherman, and the distributor—each needs to do their part to stay informed and become active participants in promoting sustainability.

To read more about sustainable restaurants, visit our Restaurant section.

Originally a fish shack and roadhouse, Nick’s underwent a major renovation in 2007, emerging as an elegant waterside restaurant featuring seasonal farm-to-table and sea-to-table California… Read more
In an interview with EthicalFoods.com, Chef Dissen discusses his efforts to source and promote local, sustainably caught seafood. Read more
The restaurant takes pride in its impeccably sourced fish. Bamboo Sushi works in partnership with the Monterey Bay Aquarium and the Marine Stewardship Council to… Read more

Labels are a start, but don’t tell the whole story. That’s why, no matter what the label says, you need to ask your egg producer these questions and decide for yourself if his practices meet your standards. Read more
The best fruit and veg is local, seasonal and organically grown…but that doesn’t mean it’s going to be sporting an organic label. Read more
You want birds that were raised humanely and you want birds that ate healthful, natural foods to ensure the best quality meat. But don’t be fooled by nice-sounding labels, even ones like “organic.” When it comes to buying poultry, a little homework will ensure your good intentions and extra expenditure don’t go to waste. Read more
Our best tips to help you eat nutritious, local, ethical and organic food for less Read more
There are many reasons to avoid eating meat unless you know how it was produced. Learn what the issues are, how to navigate the confusing world of meat labels and use our checklist to find the best beef, lamb, goat and pork. Read more

One burner, no oven...still manage some healthy an