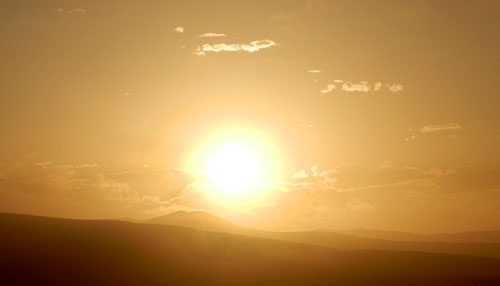 Solar ovens are an elegant solution to cooking food with a minimum of effort, no fuel and zero carbon emissions. Best of all, the food tastes great.

For all the technological wizardry deployed to cleanly harness the world’s inexhaustible resources of sun, sea and wind, there is a lot to be said for simplicity. And few clean technologies package their functionality as simply and elegantly as solar ovens: sunshine plus mirrors (plus a little time) equals a cooked meal. Solar ovens allow food to be cooked without the need for fuel, or for noxious smoke and pollutants. They are zero-carbon, with no greenhouse gases emitted. Best of all, solar ovens change the fundamentals of your cooking—the outdoors becomes your kitchen, the garden, park or campsite your dining room.

There is, however, a lot more to the solar oven story than finding a cleaner, greener way of having a barbecue. Solar ovens can be used to sterilize and pasteurize water and dishes; they are helping to transform the life prospects of the poorest communities in the developing world, and even to slow deforestation. They are portable, and can be used in both summer or winter, as long as the sun is shining. And because they can be made from the simplest of recycled materials, solar cooking is a technology that is open to all. The principles behind solar ovens are disarmingly elegant too. It is simply a matter of arranging reflective surfaces in such a way that the energy of our local star – the sun – is brought to bear on the cooking pot or pan. By placing the pot or pan in a glass-fronted box, much of that incoming energy is trapped. This produces temperatures that range from 300°F to 400°F (150°C to 200°C ), although some ovens claim to be capable of reaching 650°F (350°C) — more than enough heat to cook most foodstuffs. Although simplicity is their watchword, solar ovens have only been feasible since glass and reflective surfaces became cheaply available. The first record of their use was by Horase de Saussure, a Swiss naturalist, in the 18th century. They continued to be experimented with sporadically, by assorted scientists, explorers and military men, until the 20th century. But it was in the 1970’s, with oil prices sky high, and renewable energy firmly on the menu, that the green wizardry of solar cookers first made a wider mark.

How to cook with the sun

Since then, they have become a valued cooking tool in the hands of green enthusiasts, developing world farmers and slow living advocates alike. But how do you use solar ovens and cookers? What sort of food can be cooked in them? And most importantly, does food cooked with the sun actually taste any good? Cooking solar certainly does require a change in approach to the task of getting a meal onto your plate. Aside from the obvious constraint of having to cook out-of-doors (and the need for plenty of sunshine) it’s worth bearing in mind that solar ovens often cook at lower temperatures than conventional ovens. That may mean adding a little to your cooking times, with more time allowed for cooking later or earlier in the day. And, unless you have a large purpose built oven that can reach higher temperatures, you should not cook bulky items, such as big meat joints. Solar ovens are great, however, for cooking soups, stews and casseroles, rice and cornbread, small birds and joints of meat. When cooking meat, a food thermometer is advisable, to ensure the temperature hits at least 180°F. Baking bread or pastry dishes may require some experimentation (and judicious timing). And the taste? Apart from that special flavor which comes from knowing your meal was a simple arrangement between you and the sun, solar food enthusiasts often remark on the fantastic difference a bit of sunshine makes to the taste. Slower cooking, it seems, makes for a more juicy and flavorsome eat.

To a degree, with solar ovens (as with most things in life) you get what pay for. Costs for solar ovens start at $50 and can run up to $300 or more. Solar Ovens For Sale        Solar Oven Cookbooks The greater the expense, the more ergonomic the designs, and the higher your cooking temperatures will be. But perfectly usable solar ovens can be made for virtually no cost. The most vital parts of a do-it-yourself solar project are a square of glass and lots of reflective tin foil. Apart from that, the rest of the oven can be constructed from wooden panels (or even cardboard) plus some baking trays and grills. Most designs involve placing reflective sheets around a central box, with the sheets angled to focus the suns rays inside the box. The box itself should be glass-fronted, and painted black, to absorb all that the sun is putting out. Simple. Now all you need is some sunshine.

We interviewed Howard Godfrey, author of the book Emergency Preparedness & More, about his experience with solar ovens.

I became interested in them years ago because of my interest in emergency preparedness.

What materials do you need to build a solar oven?

I have made them out of nothing more than cardboard, old newspapers and glass for the top.  Always paint the inside black. The outside dimensions of a solar oven should be approximately 24 inches square.  The inner box should be approximately 20 inches square.  The space in between the two boxes should be filled with insulation.  This can consist of newspaper or cardboard.  Line the inside and the top reflector with aluminum foil and put a lid of glass or Plexiglas on top and you are ready to cook.

What is your opinion of solar ovens available for purchase?  Are the ones on the market any better than homemade?

The commercial ones, while a bit pricy are more efficient.  My favorite is the Sun Global Oven.  It will reach temperatures in excess of 350 degrees.  I have never had any problems with this oven regarding odors, but be sure and follow the directions prior to using.  I have been able to cook most things with either a homemade or commercial oven.  The commercial ones normally reach high temperatures and cook faster.

Do you have any tips for people who are new to cooking in a solar oven?

The big one is to not be in a rush.  It is going to take twice as long in a lot of cases.  Keep a good eye on the stove and make sure it stays in the sun and preferably out of the wind.  Use black or dark colored pots.  Preheat your oven if you are baking.

What can you cook in a solar oven?

You can bake cakes, bread or just about anything else.  The only thing I know that doesn’t seem to work in them is frying.