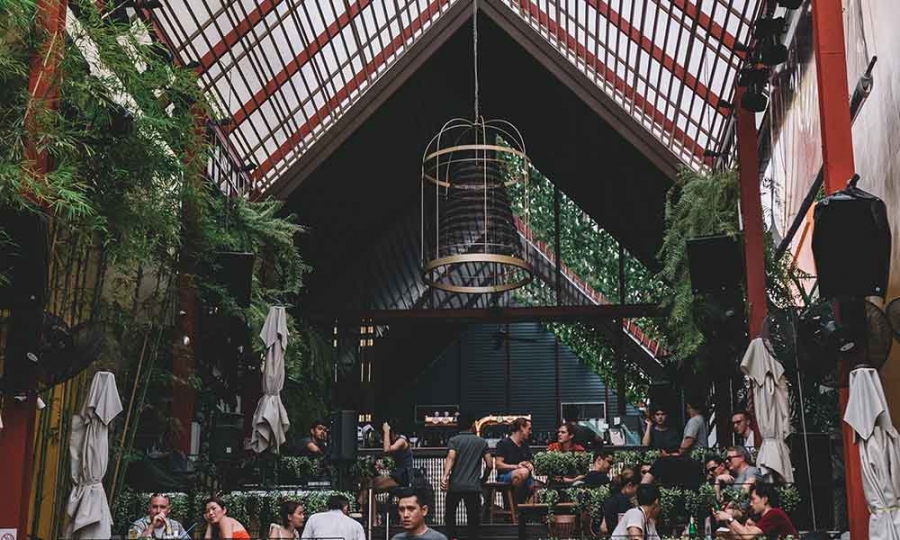 From spent cooking oil to toxic cleaning supplies, restaurant pollution and food waste is a serious problem that takes many forms.  Whether through individual integrity or city mandate, many green restaurants are finding novel ways to move toward zero waste.

600,000 tonnes of food waste was disposed of in 2009, two-thirds of which could have been eaten if it had been better portioned, managed, stored and/or prepared. It has been estimated that through better waste management the food industry could save up to £724 million [$1.11 billion].

Meanwhile, in the United States there are no current food waste statistics that specifically deal with the restaurant industry.

Landfills are the third leading human related source of methane in the United States which, in 2009, accounted for 17% of all methane emissions.  Methane is one of the more powerful greenhouse gasses; the prodigious amount of organic waste dumped in landfills has contributed to the degradation of the atmosphere.

It is no wonder then that the restaurant industry, as a leading generator of food waste, has started finding ways to curtail their refuse.  One of the most prevalent ways restaurants are doing this is simply through separating their garbage into waste, recycling, and compost, along with recycling other byproducts from cooking, such as spent cooking oil.

San Francisco’s landmark restaurant Cliff House did just this.  The Cliff House educated its staff on waste reduction and reinforced the habit by using illustrated signs to designate which items were to go in which of the three bins.  Ralph Burgin, general manager at Cliff House, stated that his staff responded positively towards this effort, and the restaurant was able to reduce an astonishing 80% of its waste by diverting it to compost and recycling.

Although restaurants rarely have the luxury of on-site composting due to the lack of space and the sheer volume of materials composted, several innovative methods of dealing with compost have developed.

In cities like San Francisco, Seattle, and Louisville, urban composting has been made a public utilities project.  San Francisco was one of the first cities in the United States to make recycling and composting mandatory for all restaurants, businesses, and private residences in an effort to reach zero waste by 2020.  Currently the city diverts 72% of waste from its landfills.

San Francisco contracts with Recology, one of the leading employee-owned waste collection services in California.  Recology converts the compost it collects into fertilizer at their Jepson-Prairie compost facility, which is then released for sale to the public; what was once waste becomes a profitable commodity which is used to grow the food it used to be.

Composting technology has gone a step further with Totally Green’s Organic Refuse Conversion Alternative (ORCA) Green Machine, which has taken on-site composting to the next level.  The ORCA Green Machine breaks down food waste through aerobic composting with the help of micro-organisms which are added to the waste mixture.  Kept in a constantly turning and consistently moist environment, the ORCA Green machine can compost up to 2,400 lbs. (roughly 1,089 kg) in a 24-48 hour period.

The most miraculous aspect of this composting process is that the machine breaks down organic material into wastewater which is safe to discard into the sewer system and leaves behind no trace of residual compost sludge.

“More and more places are seeking better ways to dispose of their organic waste, and our ORCA machine is an excellent on-site option,” commented Nate Baker, President of Totally Green.

Reducing food waste in restaurants: getting usable food to the needy

One of the best ways to reduce waste is to create a conscientious and consistently updated ordering schedule. By carefully evaluating which foods are most often left on diners’ plates after their meal, as well as the foods that spoil due to overstock or lengthy transportation time, restaurants are able to order the right amounts of food at the right times, while leaving out foods that dinners often reject.

It is, however, impossible for restaurants to perfectly predict how much food they will need.  At the end of the night there is bound to be some food left over that cannot be used the next day. This is why companies like Food Donation Connection (FDC) links restaurants with a network of hunger relief agencies and charitable organizations to which restaurants can donate their surplus food.  Currently the FDC is established in the United States and Canada, but is working to spread to the UK and Australia.

Instead of competing with similar non-profit organizations for government aid to support them, funding for the FDC comes from a small portion of their food donors, who donate a portion of their tax savings received from federal tax deductions and decreased disposal costs.  In return the FDC manages and coordinates the food donors’ surplus food so that it can go to optimal use.

Since their founding in 1992, FDC has coordinated the donation of over 164 million lbs. (75 million kg) of prepared food that would have otherwise gone to waste, often due to the rigidity of food safety guidelines.

Food is not the only waste coming from the kitchen–fats, oils, and grease (FOGs) get disposed of as well.  In this regard San Francisco has surpassed many other metropoles in its grease recycling program, called SF Greasecycle, which was launched in 2007.  Due to the improper disposal of grease down restaurant and residential drains, the city of San Francisco has spent roughly $3.5m each year to unclog public piping systems.

To Karri Ving, the Water Pollution Prevention Program’s biofuel coordinator, clearing up grease from the sewer system is, “Like a 70 year old person who’s eaten cheeseburgers all their life and then goes vegan–cleaning up those arteries takes a while, but it will happen much faster with less grease entering.”

Run by San Francisco’s Wastewater Department, SF Greasecycle collects grease for free from over 1,000 restaurants as well as six household drop-off sites stationed across the city. 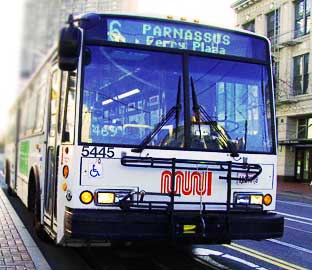 “We will be exchanging the cooking oil we collect (about 25,000 gallons each month) for biodiesel.  Biodiesel producers send a 6,000 gallon tanker to our transfer station located within our treatment plant to collect the used cooking oil, then they drop off 6,000 gallons of biodiesel at our city’s fuel vendor for use in our municipal fleet.  That way we can guarantee grease collected is dedicated to fueling our fleets,” Karri said of their grease for biofuel exchange, begun in December 2011.

Once grease comes into contact with water it goes from being yellow grease, which is reusable and able to be used to create biofuel, to brown grease which is unsuitable for reuse.

Although there are private companies that pick up grease from restaurants, SF Greasecycle focuses on smaller businesses that are often overlooked.  “Big establishments like fast-food chains often are competed for by private grease haulers but the small mom & pops with small amounts of grease, as well as language and logistical barriers, are often ignored by private grease haulers.  This is the grease that can end up in the sewers.”

The city does not collect any profits from the Greasecycle program.  Their benefits lie in the money that would otherwise be spent on cleaning the city’s pipe system as well as on biofuel for the city’s public transport bus fleet.

Grease is a fairly obvious byproduct of a kitchen that is capable of polluting streams and damaging sewers, however the kitchen contains other pollutants not  often thought of.  Cleaning supplies used in restaurants often contain hazardous chemicals.  The most common in the restaurant industry–chlorine, which was listed under the 1990 Clean Air Act as a hazardous air pollutant–is found in certain types of dish washing detergents, bleach, disinfectant cleaners, mildew removers and toilet cleaners.

One of the most prominent ways in which chlorine contributes to inside air pollution is through dishwashers, which release chlorine into the air through a process called “volatilization”, in which a chlorine/water mixture gets vaporized during the cleaning cycle and is let out in an exhaust of steam.

According to the Hazard Summary released by the Environmental Protection Agency (EPA) , “Chlorine is a potent irritant in humans to the eyes, the upper respiratory tract, and the lungs.  Chlorine is extremely irritating to the skin and can cause severe burns in humans.”

Natural or other non-toxic cleaning supplies are hard pressed to compete with their cheap, toxic counterparts, in part because of health food regulations.  America’s Food and Drug Administration’s (FDA) food code stands as a model upon which states can adopt or pattern their own food health code, and 48 states and territories representing 79% of the U.S. population have done just that.

The latest food code released in 2009 requires surfaces to be sanitized so that 99% of representative disease microorganisms of public health importance are killed. Restaurants are free to use alternative cleaning supplies as long as they can meet these guidelines.

However, restaurants like The Plant Cafe in San Francisco have found alternatives to using harsh chemical cleaners.  The first restaurant to use this technology commercially, the Plant Cafe has outfitted its restaurants with an electrolyzer system made by EcoLogic Solutions, which introduces acidic and alkaline fluids into the tap water in order to clean everything—from counters, floors and windows—to dish and hand washing.

A New York poultry processor uses it to kill salmonella on chicken carcasses.  Minnesota grocery clerks spray sticky conveyors in the checkout lanes.  Michigan jailers mop with electrolyzed water to keep potentially lethal cleaners out of the hands of inmates.

A process which has been used for several decades in both Japan and Russia, electrolyzing water is the simple process of taking water in which table salt is added and charging it with an electric current; the resulting chemical reaction creates alkaline and acidic components to the water, which kills micro organisms without toxic chemicals.

Read more about solutions to food waste and pollution.

There are many reasons to avoid eating meat unless you know how it was produced. Learn what the issues are, how to navigate the confusing world of meat labels and use our checklist to find the best beef, lamb, goat and pork. Read more
Our best tips to help you eat nutritious, local, ethical and organic food for less Read more
The best fruit and veg is local, seasonal and organically grown…but that doesn’t mean it’s going to be sporting an organic label. Read more
Labels are a start, but don’t tell the whole story. That’s why, no matter what the label says, you need to ask your egg producer these questions and decide for yourself if his practices meet your standards. Read more
You want birds that were raised humanely and you want birds that ate healthful, natural foods to ensure the best quality meat. But don’t be fooled by nice-sounding labels, even ones like “organic.” When it comes to buying poultry, a little homework will ensure your good intentions and extra expenditure don’t go to waste. Read more