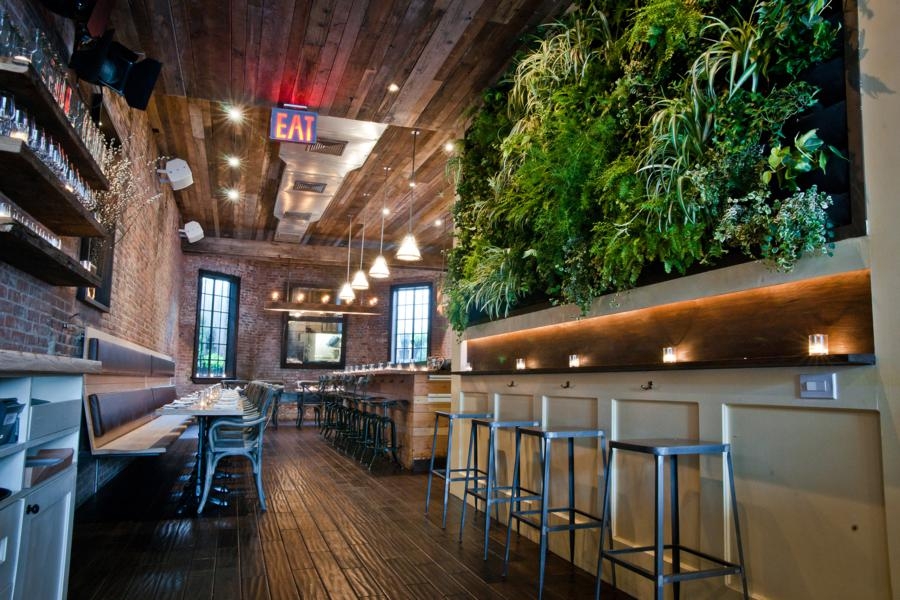 Restaurants have taken recycling to the next level by using reclaimed materials to construct and renovate their businesses. 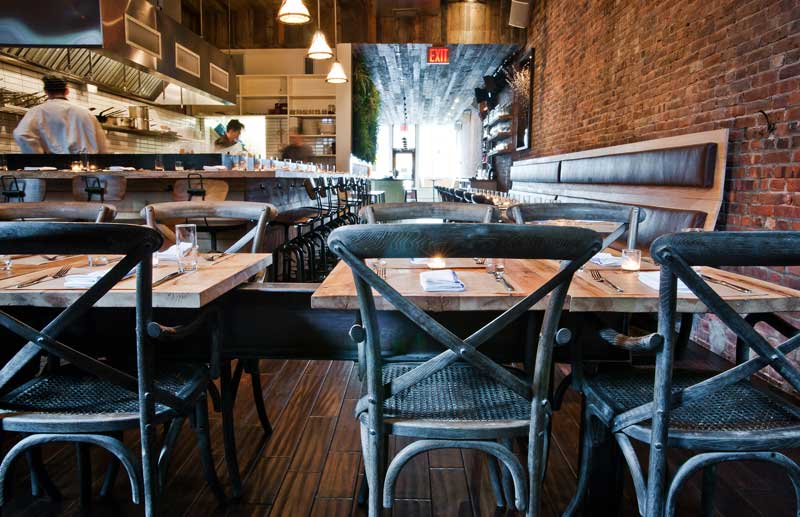 Reclaimed materials give Colonie a unique urban barn interior with an industrial twist.

Suppliers, architects, and construction workers that specialize in reusing building materials have pushed this style of building into the mainstream.

The great success of using reclaimed materials can be attributed to the innovation of those who look at an old window frame, subway tiles, or a variety of weathered wood and see potential.

Colonie, a New York restaurant, used recycled wood for its tables, flooring, and ceiling and boasts a wall made out of all recycled materials which houses 20 different plant species. Durability of the items Colonie used to build its interior was ensured by only purchasing materials that were made for industrial use.

Perhaps most unique are the items Colonie has repurposed, such as a steel beam found on the roof of the restaurant which now hangs over diners as a chandelier—or their use of recycled church pews, which were turned into banquette tables. With items such as these, Colonie has fashioned its aesthetic after a sort of urban barn house with an industrial twist of wrought iron. 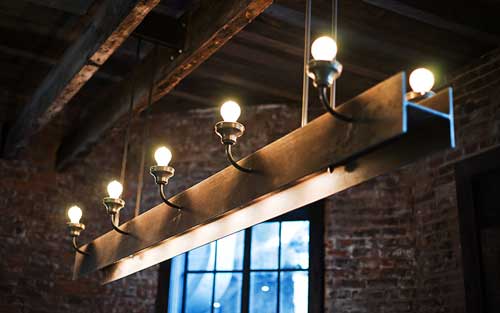 A repurposed steel beam gets a second life as a chandelier

“Depending on the material and where you find it, it can be much more expensive or much cheaper to use reclaimed materials, just as some antiques are thousands of dollars while others are sold for next to nothing in thrift stores,” stated Elise Rosenberg, co-owner of Colonie. “Generally, if you’re willing to deal with some imperfections (which we generally prefer), you can find some reclaimed materials at great prices.”

When asked about the availability of recycled materials, Elise observed, “We haven’t had a problem finding reclaimed wood at all.  The hardest things to find are tiles (finding enough cool ones that are in good condition and that we like) and chairs/barstools. We might find a few cool ones, but finding twenty is near impossible.”

Reclaiming so much more

Recycled materials used in building or renovating restaurants don’t always come from other buildings.  Materials like shipping pallets have been made into tables and living walls like the one at Colonie, which support lush plant life.  Even plastic bottles have been recycled to create the Plastic Dining Room catered to by C Restaurant in Vancouver, which sits afloat of almost 1,700 plastic bottles. 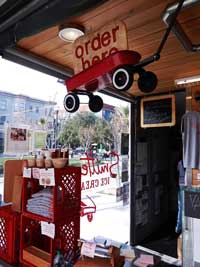 Smitten: Ice cream made to order in a recycled shipping container.

Even Starbucks has jumped on the bandwagon by opening up its first cafe made from four shipping containers in Tukwila, Washington.  This is part of a greater initiative made by Starbucks, which has committed to using more reclaimed and recycled materials during construction and renovation of its cafes.

Shops and restaurants such as Smitten Ice Cream in San Francisco and Aprisa Mexican Cuisine in Portland have emerged to embody the idea of a semi-permanent and mobile kitchen, while manufacturers such as Müvbox have created mobile units that unfold automatically by solar power in under a minute.  Read more about shipping container restaurants here

According to the Waste & Resources Action Programme (WRAP) waste that comes from construction, demolition, refurbishment and excavation generates an estimated 120 million tonnes of waste each year in the UK.  Meanwhile in the US, according to an Environmental Protection Agency (EPA) estimation in 2003, over 164 million tons of construction and demolition related waste is generated, only 40% of which was reused or recycled. 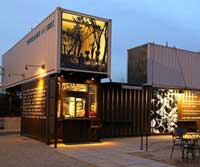 Industrial waste aside, support for the use of reclaimed and recycled materials in building projects has come from governments all over the world who realize that the environmental cost of construction and demolition is a much more dynamic issue.  A 2002 EPA report estimated that construction correlated release of CO2 equivalents amounted to 131 million metric tons that year.  Apart from the green house gas implications of construction and demolition landfill waste, it is important to consider the resources that go into, and the byproducts of, creating new building materials—whether these are the fuel and energy that go into manufacturing, chemical byproducts entering the waste stream, or deforestation that occurs as a result of this process.

Supporting the use of reclaimed and recycled materials is not an effort taken on solely by countries’ governments, but by city governments and external housing associations as well.

San Francisco’s Planning and Urban Research Association (SPUR) strives to make using reclaimed and recycled materials easier for businesses.  As a part of their proposal for sustainable development as a citywide project, SPUR lists the construction of new buildings with easy disassembly and reuse in mind as one of their main goals.  The mantra “deconstruction, not demolition” is popular amongst organizations such as SPUR as part of a sustainable design.  SPUR also suggests that new building projects use materials that have a long lifespan so that they are strong and safe enough to be reused to uphold future buildings.  Furthermore, SPUR has been working to implement a system by which reusable materials can be easily identified during the reconstruction process.

Certification standards for reclaimed materials has been taken on in the US  by Leadership in Energy and Environmental Design (LEED) and Building Materials Reuse Association (BMRA), and in the UK by the Code for Sustainable Homes—all of which were founded for the promotion of constructing sustainable homes and buildings.  BMRA works, for example, not only to reduce construction waste, but to promote the marketability as well as value of reclaimed materials in what is becoming a successful industry.

Whether through the use of what would be considered industrial waste or bringing back a piece of history by using antique items, restaurants are finding innovative and inexpensive ways to build uniquely environmentally friendly businesses.

The Resourceful Renovator: A Gallery of Ideas for Reusing Building Materials