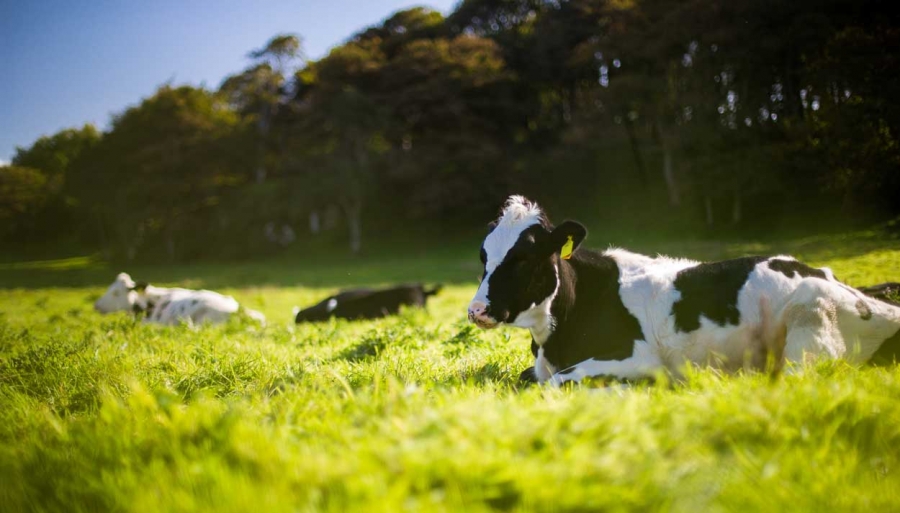 How did you get into the dairy business?

I was a medical educator before my grandparents passed away and left my brothers and I 600 acres of farmland.  I grew up on the farm but I was never really a professional farmer.

When I started farming I realized very quickly that I needed to design a business plan which was vertically integrated, meaning that I controlled the whole food chain.  I didn’t want to have some broker or processor between me and my consumer because the processors seem to do two things: rob the nutrition from the food and also rob money from the farmer.

I also wanted to be diversified with more than one crop.  I wanted to be very closely connected to our consumers.  Differentiation was very important and the best differentiation in 1999 was being certified organic, which was something that I learned from consumers—they were very interested in no pesticides, no antibiotics, nothing artificial.  They wanted solar powered, earth friendly kinds of foods.  So that launched Organic Pastures dairy and what we do today.

Many people think organic milk and raw milk are the same thing.

I spend quite a bit of time standing across the table from our consumers at farmers markets.  We often ask our customers if they’ve ever consumed raw milk and if they know what it is.

And they say, ‘Oh yeah, I drink it every day.  I get organic milk.’  I ask them if they understand the difference between raw and organic and I get, ‘Well isn’t organic raw?’  And although it’s ultra high temperature pasteurized there is a huge confusion in many consumers’ minds about what organic really means.

Unfortunately the gut is not a shelf.  Products should hit the gut, fall apart and immediately be hydrolyzed, assimilated, and digested.

In the case of raw milk we know that it breaks down very quickly, it is easily digested and does not cause lactose-intolerance in practically anyone—versus pasteurized milk, which causes lots of digestibility issues with 30% of the population or more and is highly allergenic.  In fact milk, whether it is conventional or organic, is listed as the number one most allergenic food on the FDA website.

So it is a very tough question and it takes deliberate education to unravel the web of confusion that has kind of been intentionally put on the consumers.  Because who would want a short shelf life, high value added product?  You want a long shelf life, affordable product—and that’s a big problem.

So what you’re saying is that it takes an effort on the consumer’s part to be educated about the products they buy and what the labeling on them actually means.

Yes, and that takes a conscious consumer and it takes energy, and time, and money, and investment—it’s not easy.  And a lot of people have just given up.  They’re exhausted.  They just go to the doctor to fix whatever is wrong with them.   The doctors in America—although they are great for trauma—are horrible when it comes to the underlying physiology of degenerative diseases, which is based on nutrition, not pharmaceutical or surgical interventions.

There is a big problem in America. But being a big problem, there is also big opportunity—and that’s what we do here with unprocessed, whole, natural, raw milk that is grass-fed.

When you talk to people at farmers markets, what do you tell people about the nutritional value of raw milk?

Well we say that raw milk comes straight from the cow.  It is not processed in any way.  It is completely whole.  When we say whole, we mean that it includes all of its wonderful yogurt-like bacteria, it contains all of its enzymes. It contains good fats that have not been changed from grass-feeding versus grain-feeding, and all of its minerals are available.  Nothing is taken out and nothing is added in.  There is nothing robbed, or added, or subtracted.   You get what Mother Nature created. Period. That has its own living proof within it.

The fats are different because pasteurized milk is generally coming from cows that have been fed grain and silage, not grass and alfalfa—and that creates an entirely different fat profile.  Grass-fed cows have the same fats as grass-fed beef: omega three and sixes; and CLAs which are good cancer fighting, heart healthy fats that are present in fish oils.  Versus grain fed which have high sixes, low threes, and no CLA.

Pasteurized milk has been depleted of almost all of its enzymes because it’s been heat treated.  It doesn’t have any bacteria, or very few.

The allergies associated with pasteurization are from the fact that you have a very high bacteria product that has been reduced to a low bacteria product, but the bacteria has not been removed—it’s just been killed.  Those dead bacteria pieces trigger a very big response from the body.  And that isn’t an immune building response, it’s an allergenic response.  The mast cells break open and the histamines go all over the place; asthma is exacerbated, eczema, etc.

There is a completely different paradigm shift of telling the consumers the truth that they then experience for themselves, in their own consumption, as validating.  They aren’t lied to by some gas cramps or indigestion issues.  What we tell them and what they experience is the same, therefore they believe us.

The raw dairy industry has had some regulatory roadblocks, one of which prohibits the transportation of raw milk across state borders for sale.

In 1987 the US Attorney General, under the Reagan administration, acted against Alta Dena, which was a big raw milk dairy in Chino, Southern California.  It was selling a tremendous amount of milk in four or five states in the southwest: California, Nevada, Arizona, Oregon—all over the place.  They acted against them because the dairy industry had put a tremendous amount of pressure on keeping Alta Dena out of these other states and Alta Dena was having a problem with salmonella recalls.

Now, there had been no recorded deaths, people weren’t getting sick, but it was just really bad press.  And the dairy industry was extremely jealous of the fact that Alta Dena was a beloved food, people just couldn’t get enough of it, and it was selling at very high value added prices.

So there was this lawsuit that happened and it put a lot of pressure on Alta Dena and the federal judge said basically that there is no way for anyone to produce raw milk in a safe manner—therefore we are going to prohibit it at a federal level from being transported across state lines for sale.

That doesn’t really change the safety of milk at all.  If I produce safe milk in California with a security cap on it and I take it 80 miles to Reno and I don’t remove the cap, the safety of the milk doesn’t change.

But it has to do with the federal law and the FDA. The FDA are really the ones that hate raw milk.  And you have to remember, if you’ve watched the movie Food Inc., there is a revolving door between the FDA, the USDA, and the big corporations that support industrial agriculture.  And that’s more than just a piece of dialogue coming from a radical raw milk dairyman—it’s really true.

When you go to the National Conference on Interstate Milk Shipments, which is a huge association membership meeting of the big dairy processors and dairy organizations, and they sit down with the FDA—the FDA runs it like a military operation.  The FDA walks in with their military uniforms. They have full military regalia; they are dressed like naval officers with their badges and hats, and the industry doesn’t lift a finger unless the FDA gives its nod.

I’ve been there two times and they absolutely hate raw milk because, guess what? Raw milk bypasses the processor.  When the processor can’t control the raw milk, the market goes crazy.  Raw milk is a wild food.  It goes directly from the farmer to the consumer, bypassing the processors.  The processors work very closely with the FDA to make sure that there isn’t any kind of seepage around the processing step so that they can control the market.

The bottom line is that it’s a political inroad and they use safety as the big, scary, one-drop-is-going-to-kill-you thing to keep all of the sheep in line.

If you look at cantaloupe, it killed 34 people last year, and spinach killed a couple of people in 2006.  The last people who died from milk died from pasteurized milk—not raw milk—in 2007, at Whittier Farms, of listeria.

Are there any other laws inhibiting the raw dairy industry?

Yes.  In the 50 states across the Union it’s like a patchwork puzzle of chaos.  Some states have completely legal raw milk with some restrictions—like California, which has very tight standards.  Pennsylvania has legal raw milk, but you can’t sell raw butter or cream.

There are only eight states that allow the retail sale of raw milk; and then about half the states allow legal sale on the farm itself; and about twenty states have some sort of severe restriction or make raw milk completely illegal.

And that’s when it’s coming out of the box.   Because before there wasn’t widely distributed information about the experience people get when they drink raw milk and how delicious it is (that’s the number one thing people say about raw milk).

People feel like big dairy and big government has basically mediated their choices and they’re finding out that they won’t drop dead from raw milk—in fact they thrive.

Customers have started to rebel against that and they do take raw milk across state lines.  For instance, Pennsylvania has a thriving interstate commerce that is illegal—going to Philadelphia, New York, and Boston.

There is a considerable price difference between conventional milk and organic milk.

The feed is almost double of what conventional feed is.  In all of the dairy states that I am aware of, dairy feed has become short, and it is because agricultural markets have surged recently.  There is a lot of export availability for doing other long term crops like almonds, walnuts, pecans, pistachios and those kinds of goods that are easier to produce.

So people are going out of these dairy feeds and going into the longer term, permanent plantings—and making more money.  Land values have gone up and there’s been this sort of shift in the agricultural paradigm.  Farming is actually becoming cool again and people are making money on it.  As a result, it has become harder and harder to get organic feeds.   People are trucking organic feed hundreds of miles to get it to their livestock.

For the raw market, we are exceptionally costly because of the insurance requirements, the added labor, the short shelf life, the refrigeration requirements, and the intensive testing program that the state of California has us going through.  We’re the most intensely tested product I think of any agricultural commodity.  One slip up and they won’t let you ship milk.

Read part two of our interview with Mark.

These seasonal soup recipes will help you make the most of September’s bountiful harvests as you transition into autumn. Potato and green chili stew by… Read more
Meet Shanti Allen, Executive Chef and founder of Alchemy, Ubud’s first completely raw vegan restaurant. Shanti meets me for our interview in a sundress and… Read more
This smoothie tastes a bit like a mango lassie. It’s made with raw, whole food and includes no additional sweeteners, no dairy, nuts or soy.… Read more
03 May – Interviews / Animal Welfare / Certified Organic / Dairy / Farming / Interview / Meat / Raw Food