PFF is turning vacant lots in Philladelphia into self sustaining food forests, providing food free for the picking. 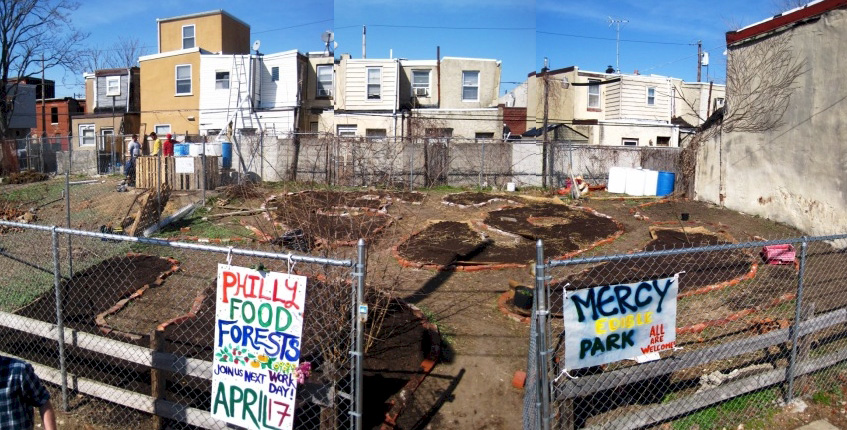 Philadelphia, like many U.S. cities in the Northeast and Midwest once dependent on large-scale manufacturing as their economic base, has clearly fallen on hard times. Its population is shrinking; properties as small as houses and as large as entire factories have been abandoned and razed to the ground. Over 40,000 vacant lots dot the city. But Philadelphia also boasts a robust food culture, a working-class ethic, and residents who envision gardens, parks and orchards in place of abandoned and neglected lots. Philly Food Forests (PFF), a volunteer collective, envisions green urban spaces that aren’t divided into traditional garden plots, intensively maintained. Rather, the spaces will be self-sufficient and look wild – like a forest. A forest full of fruit and nut trees and other food plants, free for the asking. The emphasis on sustainable and self-maintaining urban agricultural spaces relies upon the foundational concept of permaculture, an ecological philosophy that attempts to, in the words of Graham Bell, the author of The Permaculture Garden, design and maintain “agriculturally productive systems which have the diversity, stability, and resilience of natural ecosystems. It is the harmonious integration of the landscape with people providing their food, energy, shelter and other material and non-material needs in a sustainable way.”

Permaculture divides the food-bearing plants in a food forest into seven layers. At the top are tall trees providing canopy cover – for example, nut trees. Below that are shorter trees such as dwarf citrus. Next come shrubs including berry bushes. A low herbaceous layer incorporates many traditional garden plants such as broccoli and garden herbs. The rhizozome layer includes food that grows underground such as potatoes. Cover crops make up the soil surface layer. Finally, vines including grapes and beans make up the vertical layer. A fully functioning food forest will contain all seven layers. In the fall of 2011, Philly Food Forests joined forces with the Occupy political movement and birthed Occupy Vacant Lots. The idea behind Occupy Vacant Lots is as simple as it sounds – reclaim vacant lots for the community through all-volunteer urban gardening projects, turning empty, unused land into productive space once again. PFF’s first big project was to take over no less than an entire city block. The 500 block of Mercy Street in the Pennsport neighborhood of south Philadelphia had 18 vacant lots to its name. In November of 2010, PFF moved in and started clearing the land. Rechristened the Mercy Edible Park, they installed a rainwater catchment system as well as a compost system. They’ve since planted trees and perennial herbs in ten formerly vacant lots. Since then, PFF has worked on spaces in West Philadelphia, West Kensington, Grays Ferry, and the Fairhill neighborhood in North Philadelphia. With the volunteers in Occupy Vacant Lots, meanwhile, PFF is working as well to start more community gardens with food forestry principles and whatever plant donations they are offered in the Brewerytown, East Kensington, and North Philly neighborhoods. Reclaiming vacant lots for community use isn’t a new idea by any means. Occupy Vacant Lots has a great deal of precedent and experience to draw on from across the country, from Los Angeles and its South Central Farm to similar contemporary efforts in Detroit, Chicago, New Orleans and other cities. Similarly, Philly Food Forests can look to urban food forests in Seattle and Northampton for inspiration and support. But Philly Food Forests and Occupy Vacant Lots may be unique in using reclaimed urban wasteland held in private hands for a public food forest. They are wading into new territory here and setting new precedents. The legal status of their food forest projects are hazy and tenuous, since technically they are squatting on private property. Legal challenges may be the next step they face in the process of setting up a self-sustaining, food-producing community green space. But PFF and Occupy Vacant Lots are willing to see it through to the end, if for no other reason than PFF’s simply stated belief: “Playing in the dirt in the middle of a city is really fun.”
22 Jul – Urban Farming / Community / Food Forest / Organizations / Urban