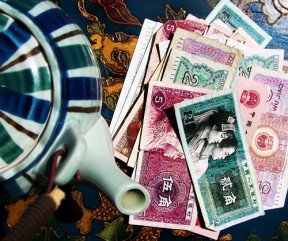 At around $200 per cup, Panda Ecological Tea is perhaps the most costly in the world. But does the essential ingredient—panda manure—justify the price?

One might not immediately think tea when they see An Yanshi dressed in a panda costume, promoting his latest organic creation. Nevertheless, his newest creation is organic tea grown in panda excrement. Grown high in the Ya’an mountainous region of Sichuan China, the panda manure tea—or Panda Ecological Tea (PET) by its formal name—is said to be smooth, and offer health benefits because of the way that pandas digest bamboo in the wild—which leaves around 70% of the nutrients in their dung, not their bodies. Panda Ecological Tea is said to be the most expensive tea in the world. At $3,500 (22,000 Yuan) per 50 grams, it is not difficult to see why. Based on how many grams of tea, on average, is in a brewed cup: that comes out to about $200 per cup. According to Yanshi, the initial proceeds from sales will go to environmental funds, and the price will decline after the initial release. Yanshi says that his idea in creating Panda Ecological Tea was to show the world that waste can be turned into something useful and healthy; and that he wants to promote the ideas of recycling and using organic fertilizers. Yanshi gets his panda manure from nearby breeding centers which only feed their pandas bamboo from the wild, making this green tea completely organic.

What is not commonly known about pandas is that they are opportunistic omnivores, not strict herbivores—even though their diet consists of 99% bamboo. Pandas do eat animal protein, but generally only when it’s easily accessible, as panda physiology is not conducive to hunting prey. Pandas have a unique digestive system that allows their bodies to process bamboo, which is harsh and tough in its natural form. Pandas will choose the tender shoots and stems that their grinding teeth can work through, and may consume up to half their body weight each day in bamboo. A panda’s esophagus is lined with tough, horny protection that allows them to handle splinters and sharp bamboo shoots. Panda manure is said to be full of healthy nutrients because pandas absorb only 30% of the nutrients that pass through their bodies; the other 70% is available through their excrement. Consider that pandas spend 98% of their time eating and sleeping, and can leave behind nearly 20 pounds (just over 9 kilos) of manure when they move locations. Add to that the fact that most pandas defecate up to 50 times per day, and it gives a glimpse of why Yanshi decided to make use of such a waste product; supply is certainly not an issue! Panda manure has also been shown to carry bacteria that break down organic waste more effectively than any other known source. One experiment showed that the bacteria broke 100 kilograms of waste down into 3 kilograms after only a 17 week period, with only carbon dioxide and water byproducts. Researchers think that there is a market for this organic compound capable of reducing waste by 96%, but whether or not organic tea at $200 per cup is the answer, is questionable.

One reason why PET is different from other varieties is in the way it is grown and harvested. Unlike most other teas which are harvested from the leaves of the plant, PET is only uses the tender new buds. This process is said to be labor intensive compared to other methods. The health benefits associated with PET are said to mirror those of regular green tea, only with stronger effect. Green tea is popular for its rich antioxidant content, which confers many health protections, including a reduction in the risk of cancer and other diseases. Since bamboo is full of antioxidants, PET is said to double the benefits because of the nutrients in the manure, coupled with the benefits of the tea itself.

Not everyone is a proponent of Panda Ecological Tea, and there are many who feel that the ecological claims are merely a ploy for media attention. Li Ximing, a guest at Yanshi’s unveiling and tasting of the tea stated that because of the high price, “…perhaps this is just hype.” One recent news article stated that Yanshi recently filed an application to the Guinness Book of World Records for the most expensive green tea in the world. Purported health benefits aside, seeking a Guinness World Record for charging an eye-watering price does not seem to invoke confidence in the the product. The hype surrounding Panda Ecological Tea is also being compared to that surrounding Kopi luwak coffee; coffee in which the beans have passed through the digestive tract of the palm civet—which is sold for as much as $600 per pound.
01 May – Shopping / Drinks