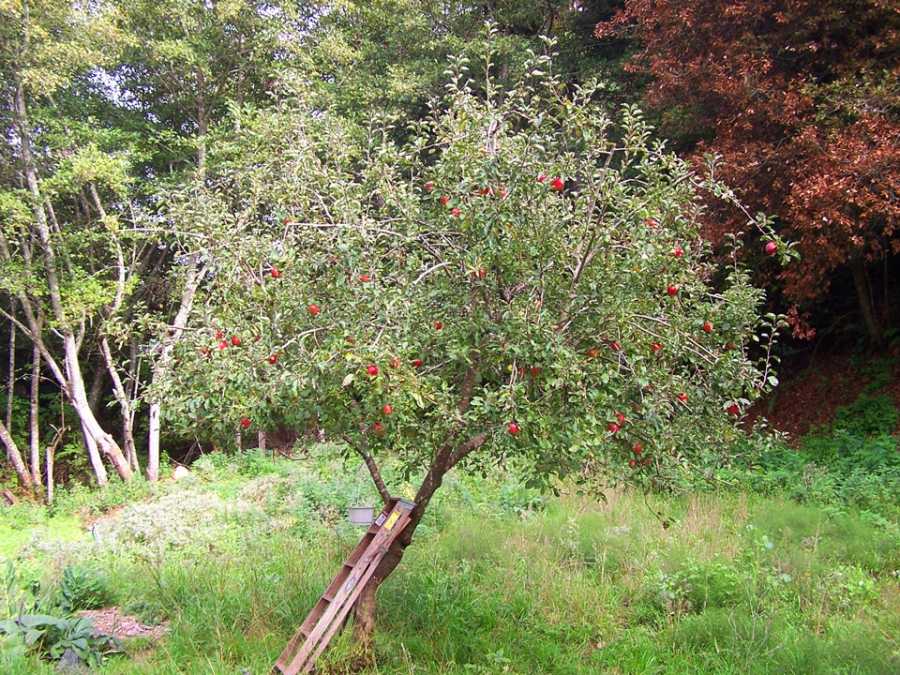 Owen Dell talks about his experience starting a free neighborhood food exchange and working toward food security through converting ornamental suburban landscaping to edible ones.

Owen Dell is a sustainable landscape architect and advocate of edible landscaping in suburbia.  In my interview with Owen, he describes how a free food exchange that he and a fellow neighbor started in their Santa Barbara, CA, community has inspired urban gardeners to bring free food swapping to their own neighborhoods.   Today, roughly 15 communal food exchanges have been established across the city comprising Santa Barbara Food Not Lawns, a chapter of the international Food Not Lawns movement, working towards neighborhood-centered food sustainability.

What made you come up with the idea to create this free communal food exchange?

Well, being in the landscaping business and devoted to sustainable landscaping, I’ve always asked myself, ‘What is the purpose of landscaping?  Why do we do this?’  We have land around our houses and we grow mostly ornamentals.  People that grow a little food tend to let it fall on the ground and let it rot because they are used to buying their food at the supermarket.  I just felt like that had to change. This had been brewing in my mind.  Then a few years ago I had a catalyzing moment.  A client of mine, who also happens to be a neighbor, sent me an e-mail.  He said, ‘I’ve got extra lemons and extra tomatoes and I never know what to do with this stuff.  Is there any way that we could share it?’ I dumped my thoughts on him of going around door to door with the bag of lemons and handing a lemon to each person, inviting them to come over on a Sunday, and share whatever homegrown produce they had in the yard. I don’t know exactly what I said to him, but I got him out of here in a fever and he went out and did it. I’m sort of a rah-rah—go getter—stand up in front of an audience and make a fool of yourself kind of person.  Doug [Owen’s neighbor] just isn’t that way, but I remember he was so elated that I think it was a real personal victory for him to be received as well as he was.  I don’t know exactly what went down with each person, but he was very happy about the outcome. We had so much fun doing it that we started expanding it to the neighborhood.  One thing led to another and one of the neighbors, who is kind of a food activist said, ‘Why don’t we do this city-wide?’ We have about fifteen of these food shares now.  Some of them are real active and some of them are not. It inspired enough people to go out and try it and then they found out that they had a really good time doing it and were getting to know their neighbors.  There’s a social benefit as well as a food benefit. It all just started to snowball in a really nice way.

It is open to everyone.  If you don’t have produce to share, come anyway because we’ve all got plenty. One of the funny, sort of ironic things is that when a certain crop ripens, everybody brings it, and then we all have a lot of boxes of say, plums.  It’s like, ‘I’ll take some of your plums, but you have to take some of my plums.’ One thing that they did, which I really disagree with, was opening it up to a much wider geographic area than what I had originally intended.  My original idea was to have an eight to ten square block zone that would be the extent of its limits.  The reasoning for that was to make it so that people can walk their produce to the exchange—which is very, very important. If you think about it, if you have an area that’s say, a mile or two or three across, very few people will be able to deliver that produce in a fossil fuel-free way by using a bicycle or walking.  Most people will put the produce in their car and drive.  Now you’ve got a little basket full of fruit and vegetables that you’re driving in your car, and it’s got to be the most fuel inefficient way to transport produce that anyone has ever come up with. Their philosophy at Food Not Lawns is, ‘Well, we just want to get people on board.’  To me, that is a no-starter because you really need to encourage behavior that is in and of itself appropriate and environmentally sound. I think that it’s encouraging a practice that’s probably worse environmentally than going to Safeway and buying your produce there.  At least the produce that is sold there is delivered on a big truck.  The food miles per unit of fruit or vegetables is very low.  Whereas your food miles, your transport impact for two pounds of arugula and lemons taken a mile or two across town and then driven back home, is quite high. I do have to hand it to them though—they’ve really encouraged people…I’m not an enemy of the program.  I just don’t agree with everything about it.

One of the things I really appreciate about Santa Barbara Food Not Lawns is seeing something that had originally started off as an exchange of produce has expanded into providing a wealth of other resources.  It can be toys for the children, favorite recipes, or even your own gardening experience.

It’s an exchange of ideas…These exchanges are usually at someone’s garden so you get to snoop around and see how they grow food. People bake things.  There’s always little zucchini bread, cookies, or something—and they bring their kids.  The kids start to socialize and it begins to feel like a neighborhood.  All of the sudden, these houses that you walk by, that are essentially filled with anonymous people, are meaningful to you.  You know the names of the people.  You know what they are growing.  You’ve eaten the food they’ve grown in their yard. Read our article on a township in the UK that grows community food in all available spaces.

We asked Owen which books he recommends. Here is his reading list. Endgame, Vol. 2: Resistance

Deep Green Resistance: Strategy to Save the Planet

Endgame, Vol. 1: The Problem of Civilization