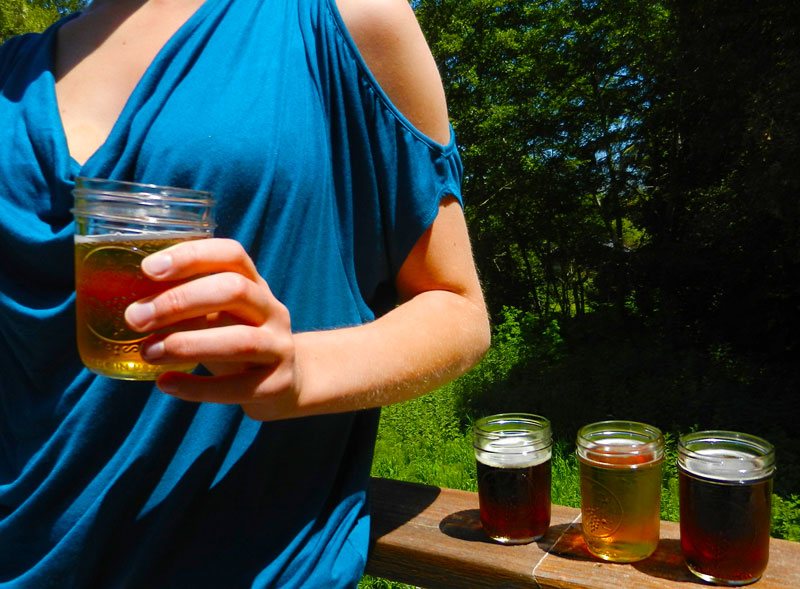 What is organic beer?

The guidelines for organic beer are similar to those applying to all organic foods—the ingredients must be grown without the use of GMOs, synthetic pesticides, herbicides, or fertilizer. The use of these inputs not only has a negative environmental effect but can pose a threat to the health of agricultural workers who farm the grains and hops that go into beer production.

Seven Bridges Cooperative, a supplier of organic brewing ingredients, states that, “Today’s agriculture relies heavily on chemicals and often causes erosion and depletion of soil nutrients through loss of biomass. Organic farming is a growing industry that reduces erosion, pollution, and water shortages by using natural methods to fertilize crops and to fight pests and disease.”

Prohibiting the use of chemical pesticides and fertilizer in the cultivation of the grain and hops is especially important when it comes to water conservation.  As one of the ingredients of brewing, water can carry these petrochemical-based agricultural inputs and leach them into the groundwater—where they pollute our drinking water, water consumed by wildlife, and are absorbed by local plant life.

Wandering down the drinks isle one may find several beers labelled ‘natural’, however it should not be mistaken to mean organic.  In fact, the ‘natural’ label as applied to beer has very little meaning.

Organic beer has been adopted by several mainstream brands.  One of the first contemporary organic beers was released in Germany by the Pinkus-Mueller brewery in 1980. Since then, organic beer has made the leap from microbreweries to larger ones, like Anheuser-Busch, which released two of its own organic beers—Stone Mill Pale Ale and Wild Hop Amber Lager—under the Green Valley Brewery label.

However, brewing organic beer is not a new phenomenon.  Before the rise of industrial agriculture in the 19th century, all brewing ingredients were grown through organic methods.

The problem with organic hops

A common misconception made by consumers is the belief that organic beer is 100% organic.  In fact, a product labeled certified organic assures that 95% or more of the beer’s ingredients are certified organic.

What about the other 5%? Previously, the USDA added hops to the National List of Allowed and Prohibited Substances, placing non-organic hops in the 5% of non-organic ingredients allowed in certified organic products.  The list was created to make allowances for ingredients that are commonly used in processed foods, where organic options are either not applicable or largely unavailable.  For instance, seaweed, which is widely used to thicken a dizzying variety of processed foods, falls under this category.

It’s easy to see why seaweed would be impractical to certify as organic, but why hops?  Hops are exceptionally susceptible to pest infestations.  To ensure a reliable harvest, large amounts of pesticides are routinely used.  Under organic certification standards, farmers can use pesticides, as long as they are not chemical—however, organic pesticides can be considerably more expensive than their chemical counterparts, making the investment to grow organic hops eye-wateringly dear.

Because of the risk involved, many hops farmers have not taken on the challenge of growing hops organically. Due to the shortage of an organic alternative to conventional hops, they were added to the National List.

“Organic hops cost two to three times the price of conventional hops, and without demand, farmers have also had little incentive to grow them, deepening commercial unavailability,” stated CoHOPerative, an organic brewers’ cooperative.

For example, only 100 acres of the 30,500 acres of hops in Washington’s Yakima Valley utilize organic methods of harvesting, a valley that accounts for nearly 30% of the world’s hops production.

However, due to an increase in organic hops production in America’s Pacific Northwest, along with rigorous petitioning by the American Organic Hop Grower Association, hops were officially taken off the list in 2010.  Effective January 1, 2013 all beer labeled organic will be made with organic hops.

The switch to organic hops will present a challenge to the beer industry.  Almost all hop production is based on contracts, some lasting for several years.  In order to certify a crop as organic, the land has to undergo a two year period in which organic cultivation is practiced in order to rid it of any residual synthetic pesticides or fertilizers.  During this interim period, a farmer cannot sell his hops as certified organic, even though he is taking on the expense of growing to organic standards.

This period can be financially destabilizing as the farmer navigates the learning curve of switching to organic cultivation while, at the same time, trying to fulfill his end of a contract made with a brewer.

This topic brings up the issue of ingredient sourcing.  Undoubtedly, the push to move to 100% organic ingredients is an important progression.  However, it is worth a note that due to the current shortage of organic hops—as well as the regional requirements to make certain types of hops—many organic brewers will look to imports from Europe and New Zealand, which already supply many hop varietals to the US.   This switch over to organic hops will force organic brewers who prefer to source locally, supporting their local economy and foodshed, to start importing their hops.

CoHOPerative was formed out of a response to the short supply of organic hops.  In order to empower smaller, organic brewers the website was created so that brewers could pool together their orders and buy hops in bulk. This allows smaller brewers to decrease their cost of buying a more expensive product—organic hops—and also sends a clear message to hops farmers that there is a significant demand for an organic product.

“If a household buys two 6-packs per week of organic beer, over the course of a year the choice would cause a farmer to convert 1/20 of an acre of land to organic agriculture for barley and hops. To put this into perspective, 1/10 of an acre of land is roughly the average size of land allotted to the consumer’s typical suburban home!”

Water conservation is a big concern for the beer industry.  A report was issued by the World Wildlife Fund (WWF) in conjunction with SABMiller and GIZ, a German sustainability development consultancy, that addressed both the environmental and financial risks that the beer industry faces due to water scarcity in many beer producing countries.

Water usage in crop cultivation differs by region.  For instance, in Tanzania the report found that it takes a total of 180 liters of water to produce just one liter of beer, while in Peru the total was much less, at 61 liters.

The WWF has already started working with NGOs, local government representatives and businesses to create watershed protection programs based on the detailed risks presented by data in this report.  The main focus of these programs is on educating farmers in water management techniques and preservation tactics of freshwater ecosystems.

Other ways to manage waste

Another way that the beer industry can cut resource costs and environmental impact is by offering returnable bottles.  Growlers are a fine example of this as they are large, usually glass, reusable containers that can hold half a gallon (1,900 ml) of beer.  With the right infrastructure, standard beer bottles could be returned at local collection and cleaning facilities.  The owner of Bison Brewing, Daniel Del Grande, commented in an interview with TriplePundit.com on what this system might look like.

“The glass bottles would have to be thicker to withstand the handling, heat sterilization, and multiple capping, but the energy use would be a third of the current required to melt down recycled bottles and reuse them. This procedure does use a lot more water to clean and sterilize, but wastewater can be cleaned and reused for landscaping if the urban planning is done ahead of time.”

Particularly inspiring is his vision of what his ideal brewery would look like.

“I would build an urban zero waste, green brewery on a brownfield contaminated site, probably along the shoreline of SF Bay, with a railspur for grain and glass delivery, rooftop solar hot water (breweries use lots of hot water), micro wind turbines, biodiesel steam boilers, upcycling of broken glass and cardboard, on-site mushroom production on the spent grain (sold in local stores), and wastewater treatment that could discharge into adjacent open space or municipal irrigation. Tons more ideas, but those can be implemented right off the bat. This brewery design isn’t a pipedream because these technologies are no-brainer business decisions that have payback periods of less than 3-4 years.”

When you look at your grocery bill as a whole, you’ll find that processed foods are often the leading driver of your expense. This is… Read more
A chicken stock recipe for serious eaters and serious cooks. Rich in flavor and high in nutrition, this stock will make everything you cook unmistakably better.… Read more
My housemate recently had one of his wisdom teeth removed.  It wasn’t impacted, so the surgery was fast and clean. He needed to have soft,… Read more
Sprouting is a great way to add nutrient and protein rich foods to your diet if you are cutting back on meat and animal products.… Read more
Knowing how to make a variety of sauces, from pesto to Indian raita, helps you make the most of your CSA vegetables. It’s the easiest… Read more
Sprouting at home is an economical and convenient way to boost your nutrition and avoid the pitfalls of antinutrients in grains, nuts, seeds and legumes.… Read more
Many people come down with colds, flu and sinus infections when the seasons change.  Here is a recipe for Chinese ginger chicken broth that, with… Read more
Our top picks for cooking this weekend Healthy and delicious recipes and inspiration from some of our favorite sites. Cinnamon Almond Baked Oatmeal TheHealthyApple.com Warm,… Read more
07 May – Labeling / Certified Organic / Drinks / Food Labels