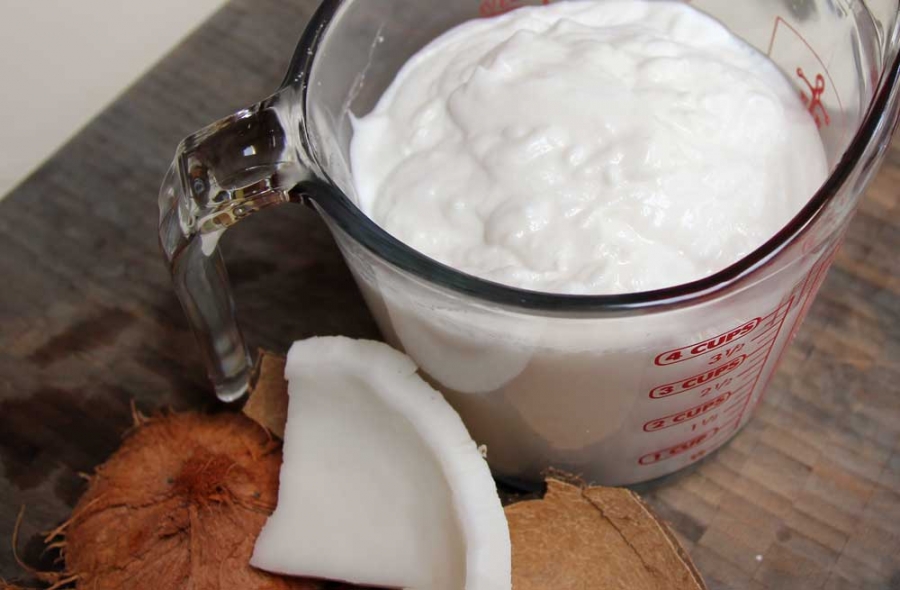 If you do this entirely from scratch, it takes time and labor. In my opinion, the result is unquestionably worth it. There are also some shortcuts that will let you make this yogurt quickly.

Many people are intimidated by the idea of culturing at home. I have seen many recipes that call for heating the coconut milk, sterilizing jars and even using machines to keep the culture at a constant temperature. There is nothing wrong with that, but I admit that I just skip all of it. Yogurt happens. I’ve noticed that in America we tend to have an irrational desire to sterilize everything.

While some people prefer to buy yogurt starter, I have had no problem just using one of my probiotic supplement capsules. If you do buy special starter, make sure it is not one that is meant to be used with dairy, or else it won’t work.

Some recipes call for thickeners, or for draining the excess liquid after culturing. I’ve never had a need for either. I think it may be because I make my base very thick to start with. 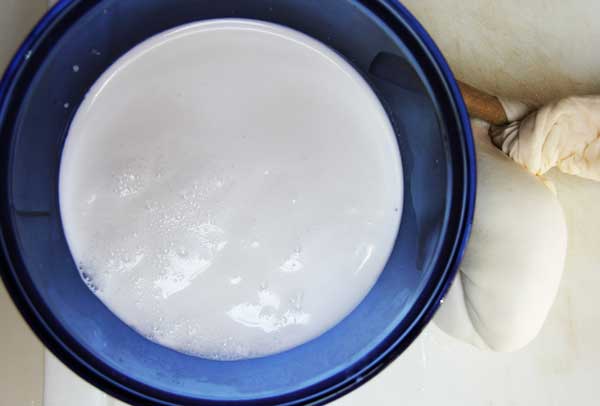 My usual weekly batches are made from four or more young coconuts and the milk of one mature coconut. It varies, because every coconut is different, some have very little flesh and some have a lot. Sometimes the flesh is very tender and gelatinous and sometimes it is a bit dry and fibrous. That’s why I’m not giving exact measurements. You should figure out how thick or thin you need the base to be depending on what kind of end result you prefer.

Making milk from fresh mature coconuts is laborious, but the end product is so very superior to anything that comes from a jar.  To do this, I take the water out of a fresh, brown, mature coconut by puncturing one of the eyes (save for some other use, but not in the yogurt), remove the meat, grind up the meat in a food processor and squeeze out the milk using a nut milk bag.  Obviously, canned milk is going to be faster and a lot easier than this!  But if you do find yourself with the time and inclination, give this method a try sometime.

Add coconut flesh, a little coconut milk (or young coconut water) and the contents of one probiotc capsule (discard the empty capsule) to a powerful blender, I use a VitaMix. You can also use a non-dairy yogurt starter culture (click here to see examples).

Blend the young coconut flesh with just enough coconut milk to make a very thick mixture. It should be almost thick enough to stand a spoon in. Blend it until it is thick and completely creamy.

Pour into clean jars, leaving some room at the top for expansion. Cover the jars with something breathable, like a cocktail napkin, muslin or even a paper towel. Secure this with a rubber band.

Let jars set somewhere away from sunlight and drafts, preferably somewhere warm and with an even temperature. I put mine on a cookie tray in an unheated oven.

Leave them anywhere from 12 hours to two days. This will depend on the ambient temperature and how tangy you want your yogurt to be. After your yogurt is cultured, remove the breathable covers and use normal lids. Place in the fridge and let cool for 6 hours before enjoying.

I don’t know how long these keep, since they are eaten up pretty quickly in my house. They do continue to get tangier over time, so if you plan to keep them a long time, you might want to make them mild to begin with.

How do I make coconut yogurt fast and easy?

If you want to make this yogurt quickly and easily, use canned thick coconut milk and frozen young fresh coconut flesh.  If you choose this option, you can prepare your yogurt in minutes in a blender. Using canned coconut milk means your finished product won’t be 100% raw, but it’s still far better than buying coconut yogurt, both in taste and nutrition.

Using this method, it takes me five minutes to make yogurt with no mess in the kitchen.  As for cost, this is more expensive per ounce of finished yogurt than buying a case of young coconuts and doing the work yourself.  But realistically, a great many people will not want to commit that kind of time and effort, so this is worth the few extra dollars.

All ingredients should be room temperature.

All utensils, cloth covers and containers need to be very clean.  Many people sterilize their jars. I don’t do this, but I do make certain to use use jars that have been washed in the dishwasher, which is very high heat.

You can use a probiotic the first time. Thereafter, you can simply use a tablespoon or so of your existing yogurt as a starter. Just add it to the flesh and milk and blend. I didn’t use any kind of special yogurt culture. I just used the probiotic supplements I normally take. I opened one capsule and made sure the powder was evenly incorporated. Since then, I have just used the last few spoons of the previous batch of yogurt to make the new batch.

The probiotics are alive and thriving in this yogurt. The bacteria will have multiplied considerably while culturing, so expect the effect to be stronger than the single capsule you put in. Unless you are accustomed to taking in a lot of probiotic, you may need to eat small amounts of yogurt until you build a good balance in your gut.

The tanginess of the yogurt will depend on the ambient temperature and the amount of time you leave it to culture. It will continue culturing when you refrigerate it, but at a slower rate. So if you like milder yogurt, culture for less time, if you prefer tangier yogurt, more time. If it’s summer and the weather is warm, you will need less time than in cooler seasons.

After your yogurt is cultured, smell it. It should smell good, and slightly tangy, like yogurt. I always check that there are no off smells or colors. I’ve only ever had one bad batch, and that was really obvious due to the black mold on top.  Always throw out any suspicious yogurt; don’t ever try to salvage it.

You can use canned coconut milk, but it will not be raw. If you do this, please be sure to get a brand that is thick and creamy, rather than thin. Each brand is different. Also, buy a brand that does not use a BPA liner in the can. As always, it’s best to make your own, but if you don’t want to, there are alternatives.  Using canned thick coconut milk is one of the shortcuts that really saves time.

It’s more economical to buy a case of young raw coconut from an Asian grocer, if you are lucky enough to live near one. If you wish to save time, you can also buy raw, young coconut flesh without the shells. Many markets now carry it in the frozen section. It’s expensive, but it does take a lot of the labor and time out of this process.

Every batch will be different. There are many factors at play. If you buy young coconut by the case, you may notice that some batches are younger and some are more mature, which means the flesh is drier and has a bit of fiber.

If you want your yogurt less thick, add more coconut milk, or even a bit of coconut water. You can play with the ratios to find out what you like best. I make a really creamy, thick yogurt. After it is cultured, I can turn the jar on its side and the yogurt does not move. Not everyone likes yogurt that thick, but it’s easy to adjust to suit your preference.

You can also make this using no coconut milk.  I prefer mine as rich as possible, but if you don’t, you can use a bit of coconut water.

If you are using packaged frozen raw coconut meat, I’ve found that one probiotic capsule can be used per two packages. I normally only make one package at a time, and using one whole capsule with a single package is also fine. If you do this, the yogurt will expand more, so only fill your containers to 2/3.

Enjoy the last weekend of October, Halloween, Toussaint (All Saints Day). Here are our favorite food links and recipes for your weekend web surfing. Read more
A lot of people are wondering what brands of chicken are healthy and humane. The answers may surprise you. In this interview we take a… Read more
Beyond nutritional content and animal welfare, you should also be aware of what happens to your eggs between the hen house and the marketplace. Read more
Featured 15 Apr – Cooking / Cooking / Dairy Alternatives / Vegan / Vegetarian