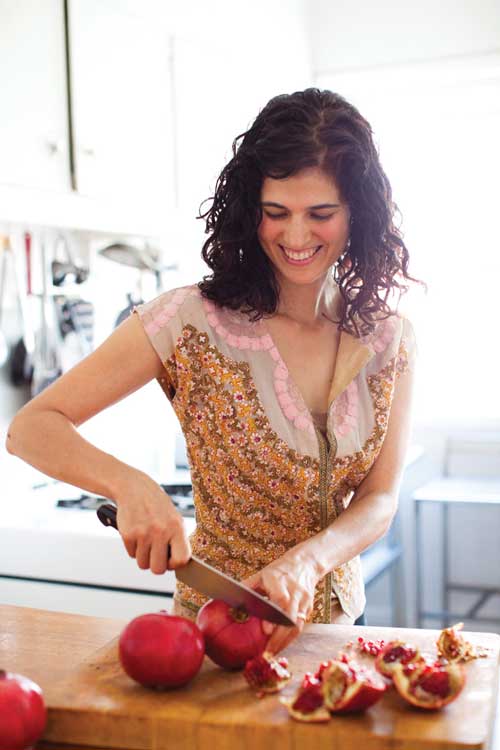 How would you describe your personal values and ethics when it comes to food? How have those values developed and evolved throughout your career as a cook, writer and educator?

“I’ve always felt that the natural world is an important presence in my life, like a dear friend. I chalk it up to attending Quaker school, and having the value of the environment instilled in me from a young age. I like to let my environmental values guide how I do my work. I try to avoid waste, whether it’s in the form of the gas used on a solo shopping trip, excess packaging and bags to transport food, or not taking advantage of what vegetable scraps have to offer – whether it’s being turned into compost or even another meal. “I didn’t fully understand that my love of cooking and love of the environment could be integrated until I came out to San Francisco after cooking school to work in restaurants. In Northern California, I saw that everyone was using locally grown ingredients, composting, changing menus with the seasons, and making an effort to serve responsibly raised meat. When I saw that cooking that way actually resulted in the best food I’d ever had, I incorporated all of those practices into my work.”

Your first cookbook, Lucid Food: Cooking for an Eco-Conscious Life

, focused on a sustainable approach to eating, while your latest, The New Persian Kitchen

, is an ode to your Iranian roots. Can readers still see your environmental values reflected in this second book?

“Oh sure. It’s the foundation of what I do, so it will always be there no matter what kind of cuisine I’m focused on. In fact, one of the reasons why I was so excited to focus on Persian cooking is because like any traditional cuisine, it is super seasonal, and seasonality is still the guiding force behind the cuisine. Iranians have always had magnificent gardens, and thus an abundance of fruits and vegetables in their diet. Like us, they have a season for eggplants, cucumbers watermelons, rhubarb, sour cherries, and persimmons, and there is a reverence for these foods that is really astonishing. This is a culture in which dried fruits and nuts are more revered than cakes and candies. I think we have a lot to learn from traditional cuisines like this one.”

You’ve celebrated your own Jewish and Iranian heritage throughout your career. How do these two cultures traditionally encourage environmental stewardship?

“To give you one example, the Persians truly acted as stewards of the land from the very start when they developed this complex system of aquifers to irrigate even the most arid zones of the Iranian desert. This is well before even the first Persian Empire, so this is quite a testament to how caring for, even transforming, the land and its potential has always been a priority in that part of the world.”

Can US readers find any traditional Persian ingredients growing wild in their communities?

“Oh yes! Sumac is a key component of Persian cooking, and it grows wild in the Northeastern United States. You’ll see it on the sides of highways in late summer and early fall. It looks like a bright red cone emerging from the bushes. The cone is made up of small red berries, which you can pull off, sort, dry, and grind. Ground sumac can be used just as you would use lemon juice. It’s a souring agent that adds flavor and tang to food. Iranians have it on the table just as we have salt and pepper.”

“Dates and honey, two foods that are so traditional they are mentioned in the Bible! Dates are native to the Middle East, and are great because you can make a few different products with them. There is date paste, which is simply a puree of dates. There is date molasses, made from dates cooked in water and then blended. And finally there is date sugar, which is simply dried, granulated dates, a product that can be substituted for granulated sugar.”

Do readers have to adopt a radical elimination diet to consider themselves sustainable, conscientious consumers?

“I personally don’t think the important changes that we need to make are all that radical. Michael Pollan said it best in his book, In Defense of Food, “Eat food, not too much, mostly plants.” I happen to really enjoy eating seasonal vegetables, fruits, and herbs, so the idea of eating more of them doesn’t feel like a sacrifice. “I think the long term solution lies in changing the food system so that fresh, seasonal, locally grown foods like these are more accessible and more affordable. I also think we need to be willing to pay more for responsibly sourced food. Grass-fed beef and free-range eggs are very expensive to produce, and we have to be willing to pay the real price for those things if we want to have a clear conscience about what we eat.”

What do you feel is the single most effective way individuals can help turn the tide toward sustainable, eco-conscious food production in the United States?

“I think the answer lies with campaign finance reform. Unfortunately, with the Citizens United decision in 2010, regular citizens lost even more influence with elected officials. As it stands, corporations have the right to spend unlimited amounts of money to support political candidates, and as everyone knows, corporations and environmentalists have opposite interests. “Amongst the top 132 political spenders who have the most influence over elected officials, I doubt there is a dedicated sustainable food advocate amongst them. I think we need to change campaign finance laws so that farmers, food justice advocates, environmentalists, and others can actually have an equal say in the political dialogue.”

In five ingredients or less, can you tell us about a tasty, eco-conscious dish readerscan whip up at home?

“Sure! You can make sabzi khordan, translated as “edible herbs,” a dish that’s part of every Persian meal. Sabzi khordan is a platter of fresh herbs, flatbread (like lavash), radishes, walnuts, and feta cheese. The platter is set on the table at the beginning of a meal, stays there throughout, and serves the purpose of a raw salad. The herbs can include but are not limited to dill, cilantro, parsley, tarragon, basil, mint, and scallions. To eat the herbs, tear off a piece of flatbread, stuff it with herbs, a radish, a walnut, and some feta, then fold it up and eat it like a mini sandwich. If you want to get fancy, toast whole spices like cumin, caraway seeds, and coriander until fragrant, submerge them in olive oil, then pour the mixture over the feta before serving.”