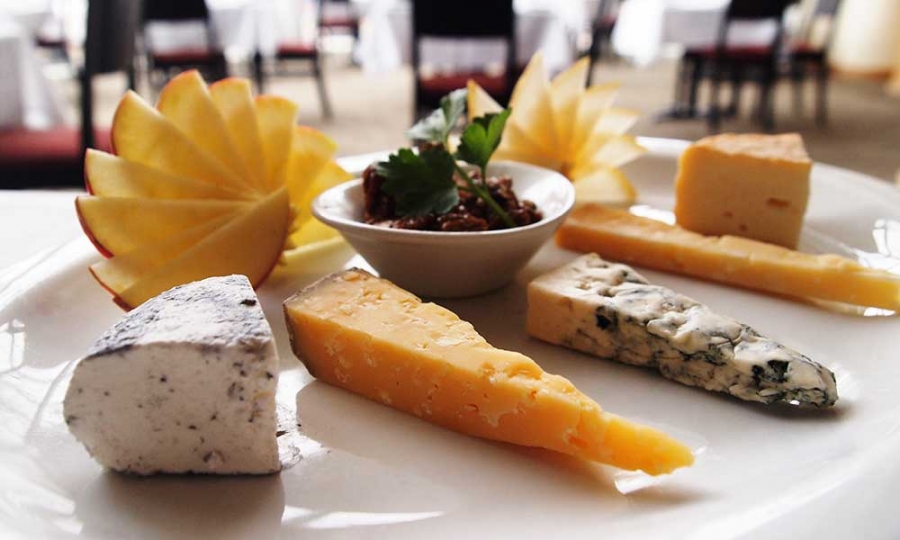 A gem of farm to table fine dining located right on Capitol Square in Madison, Wisconsin, L’Etoile restaurant is not only a bastion of high-quality food and service; it is a neighborhood institution.

Congresspeople mingle with university faculty and staff, as well as those few well-heeled townies unconnected to either the capitol or the college. But L’Etoile is more than just the go-to spot for Madison denizens’ fancy food needs.

L’Etoile was founded in 1976 by Odessa Piper with an emphasis on local, seasonable food that substantially predated the current “locavore chic.” Long before it was fashionable to do so, Piper cultivated strong ties with small regional farmers and their products, from heirloom vegetables and sustainably raised meats to local cheeses, nuts and other artisan products.

Executive chef Tory Miller explained to Madison Originals, “We look at every item that we buy, every ingredient, to make sure that the providers are not mass-producing, not using up resources—whether that means crowding animals or using excessive fuel to transport products.” L’Etoile works closely with the vendors of the Dane County Farmer’s Market, a weekly event that takes place right outside the restaurant’s doors. The Dane County Farmer’s Market is recognized as one of the finest regional farmer’s markets in the country, attracting 150 vendors every Saturday year-round.

In 2005, Miller and his sister Traci assumed full ownership of L’Etoile. In recent years, Dianne Christensen and Tracey Solverson have also joined the Millers as owners. The team has garnered recognition from the former Gourmet magazine as one of “America’s Top 50 Restaurants” and a spot in Saveur’s annual “Top 100” roundup. Santé, a magazine for restaurant professionals, named it the Most Sustainable Restaurant in the Midwest in 2007.

L’Etoile’s menu changes daily and always showcases fresh regional produce and meats, most of them from small farms. Traci notes, “The menu is completely dictated by what’s available”—and what’s not. If something’s not growing—if there’s no rain or a late frost, for example—the chef has no choice but to change his plans.

Miller lists key sources for each of his ingredients right on the menu, which states at the bottom, “L’Etoile passionately supports Wisconsin farmers.” The chef prefers to buy and utilize whole animals rather than precut meat, which helps reduce waste.

How does the restaurant handle the long, harsh Wisconsin winter and still maintain its commitment to local foods? It takes some creative strategizing, but by now L’Etoile is an old hand at it. The restaurant staff “puts-by” (cans and preserves) throughout the year, and Miller has also taken to preparing house-cured charcuterie. Root vegetables are cellared. Winter greens such as spinach and kale are grown in unheated hoop houses that keep the wind and snow at bay.

One of the highlights of the menu is the cheese list, which is as extensive as some restaurants’ wine lists. A recent menu showcased 33 cheeses from 11 different local cheesemakers, including the award-winning Pleasant Ridge Reserve from Uplands Dairy and Bleu Mont’s Bandaged Cheddar Reserve, an unusual style of aged cheddar made with organic milk and produced in a facility run by wind and solar power.

In 2010, L’Etoile moved from its cozy two-story dining space into a bank building with glass front and side walls. The owners also took the opportunity to open a more casual restaurant called Graze in the same building. On Fridays, Graze serves up time-honored Wisconsin tradition in the form of a fish fry using seasonal certified sustainable fish. Graze is helping to fulfill Miller’s dream of making sustainable eating more accessible to everyone, not just fine dining patrons. Leading both Graze and L’Etoile lets Miller have his cake and eat it, too.

Sometimes sustainability is equated with upscale restaurants that specifically market their local and sustainable credentials. But what about your favorite pizza joint, or the place where you pick up a quick salad on the way home from work, or the bakery that supplies your daily bread? To really make a… Read more
Bittersweet: 16 year old celebrates birthday with other fire evacuees in West Marin West Marin offers shelter, food and support for families fleeing the Sonoma and Napa fires. At Marconi Center tonight, where evacuees have been offered free lodging. Tomales Bay Oyster Company (TBOC) and the Marshall Store cooked up a huge… Read more
Long Meadow Ranch restaurant, winery, olive grove and ranch in California’s Napa Valley Ted, Laddie and Chris Hall, owners of Napa Valley’s beautiful Long Meadow Ranch, live and work by four simple words: Excellence through responsible farming. This strict focus on stewardship, respect and balance has helped the Hall family… Read more
Margot McNeeley, founder of Project Green Fork in Memphis, Tennessee, talks to EthicalFoods.com about the challenges of helping restaurants move toward sustainable practices. Read more
Some restaurants are taking the next step in local, sustainable food by creating their own gardens and small farms. Whether their gardens contribute significantly to the daily menu or simply provide herbs and a few vegetables, restaurant owners and chefs are using them as a source of culinary creativity and unparalleled fresh quality. Read more
Originally a fish shack and roadhouse, Nick’s underwent a major renovation in 2007, emerging as an elegant waterside restaurant featuring seasonal farm-to-table and sea-to-table California cuisine. Executive chef Austin Perkins spoke with us about sourcing local, sustainable seafood, meat, dairy and produce from the Marin Sonoma foodshed. Read more

In the kitchen with Ethical Foods

Marmelade à la citrouille et à l’orange. Here’s a lovely recipe for a fresh pumpkin jam that’s earthy, bright and versatile. The flavor and color will… Read more
Whatever you may have thought about vegetarian holiday fare, today, top chefs are creating delicious, festive and satisfying vegetarian holiday menus that may leave you… Read more
Here’s an easy recipe to make home made eggnog from scratch and avoid all the chemicals and weird ingredients in store bought eggnog. Read more
Like many of us, Jenn Sebestyen, author of the Veggie Inspired Blog, found herself with plenty of holiday leftovers.  So what do you do with… Read more
Our top six tips for a healthy, sustainable and locally sourced holiday dinner. Save money, avoid waste and enjoy a wholesome, humane feast. Read more
Recipes for a gorgeous and festive holiday dinner party While there are many cookbooks out there that inspire you to cook healthy, simple every day… Read more
How to make classic pumpkin bread, and an adjusted recipe that you can give as a pantry gift. I’ve noticed a trend in bakery pumpkin… Read more
The light, fresh flavors of traditional Vietnamese cuisine make a perfect base for exciting vegan cooking. Van, a Vietnamese vegan cook shares her passion for… Read more
Why order takeout when it’s so easy to cook at home? Try this easy Thai curry recipe at home for a simple, healthy and knockout… Read more
Here’s an easy and delicious recipe for braised oxtail, an often overlooked cut in the US. This recipe can also be made with bone in… Read more
These seasonal soup recipes will help you make the most of September’s bountiful harvests as you transition into autumn. Potato and green chili stew by… Read more
Wondering how to cook goat? Here’s a braised goat recipe for a shoulder chop, or any cut suitable for braising. It’s a lovely meat that… Read more
What do you think of prunes? This amazing pairing of lamb and prunes is guaranteed to give you a new perspective on this humble ingredient.… Read more
Jamu is a traditional Indonesian tonic taken as medicine for all kinds of ailments. Make your own refreshing turmeric Jamu to rev up your digestion… Read more
Many people come down with colds, flu and sinus infections when the seasons change.  Here is a recipe for Chinese ginger chicken broth that, with… Read more

Our best tips to help you eat nutritious, local, ethical and organic food for less Read more
There are many reasons to avoid eating meat unless you know how it was produced. Learn what the issues are, how to navigate the confusing world of meat labels and use our checklist to find the best beef, lamb, goat and pork. Read more
Labels are a start, but don’t tell the whole story. That’s why, no matter what the label says, you need to ask your egg producer these questions and decide for yourself if his practices meet your standards. Read more
The best fruit and veg is local, seasonal and organically grown…but that doesn’t mean it’s going to be sporting an organic label. Read more
You want birds that were raised humanely and you want birds that ate healthful, natural foods to ensure the best quality meat. But don’t be fooled by nice-sounding labels, even ones like “organic.” When it comes to buying poultry, a little homework will ensure your good intentions and extra expenditure don’t go to waste. Read more
15 Feb – Restaurant / Local Food / Restaurant / Sustainability