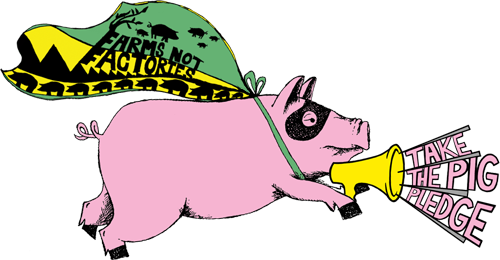 Although the United Kingdom has established some of the highest animal welfare standards in Europe, meat produced under far less humane conditions continues to flood the market. In response to this proliferation of low quality meat – and the subsequent social and environmental abuses required to produce it – filmmaker and activist Tracy Worcester founded Farms Not Factories in 2003. Through films and awareness campaigns, the organization works to educate people about the difference their shopping choices can make to animals, human health and the environment, and invites people who eat pork to take The Pig Pledge.  Already more than 2,500 people have taken The Pig Pledge, saving an estimated 1,265 pigs from the horrors of factory farming. Tracy Worcester spoke with Ethical Foods about The Pig Pledge, the widespread effects of intensive factory farming and why these unsustainable practices pose a direct threat to human health.

What exactly is The Pig Pledge and what do people commit to when they take it?

“The Pig Pledge is simple; it’s a pledge to avoid meat from animal factories and t only buy meat from high welfare farms—or go meat-free. People have the power to change the food system through changing their shopping habits. We want to harness this power to bring an end to animal factories. “We have loads of handy of resources on our website, including a labeling guide, an interactive high welfare directory, recipe ideas and advice on reducing meat consumption and buying cheaper cuts of meat.”

The Pig Pledge encourages only eating “high welfare” pork, but how does your organization define it and how do people know they’re getting it?

“We define high welfare as meat sourced from ethical and sustainable farms, where pigs have access to bedding and adequate space. “In supermarkets, there are a lot of labels that describe the different systems of raising pigs. However, these labels can be confusing. We’ve produced a star rating system, which provides information about what these labels really mean, so that people can choose to buy pork that is better for pigs, people and the planet.”

Can you describe a typical factory farmed pig’s journey from piglet to plate?

“Before a piglet is even born in an animal factory, its mother may have been kept in a narrow crate or sow stall and—although the law restricts their use in the EU—much of the pork imported into the UK has been raised in conditions that are illegal here. “From a week before she gives birth until the piglets are weaned five weeks later, the mother pig is confined in a narrow steel cage on bare concrete slats. She is unable to turn around, make a nest for her piglets or make proper contact with them. The piglets are removed from their mother at between three and four weeks, before their immune systems have properly developed. This means they have to be given antibiotics routinely to prevent them catching diseases from the shock. They are then fattened for four to five months in barren overcrowded pens, often without bedding, and have their tails cut off to prevent tail biting caused by boredom and stress.”

How does it differ from that of animals raised on small, humane farms?

“In the UK, 40 percent of sows live outdoors and have access to hutches with bedding, usually straw, where they can shelter and where they give birth to their piglets. As piglets grow they can spend more time outdoors, playing, rooting, exploring and exercising. They suckle their mother for about a month (or 40 days on organic farms) when most outdoor bred piglets are weaned and brought inside into fattening pens, where the law says they must be provided with adequate bedding. “There are also indoor systems that are high welfare because the pigs have plenty of space and bedding. On these high welfare, indoor farms — and on all outdoor systems—antibiotics are seldom needed and tail biting is rarely a problem.”

Aside from the inhumane treatment experienced by these animals, your have highlighted that factory pig farming can also have dire consequences for both human and environmental health.

“In the UK, 30 percent of all antibiotics are given to pigs in animal factories to keep them alive in stressful, overcrowded and unhealthy conditions. The overuse of antibiotics in intensive systems has created antibiotic-resistant strains of bacteria capable of causing illness in both human and animal populations (such as Campylobacter, E. Coli, Salmonella and the pig strain of MRSA). This can cause serious, often fatal illnesses in people because antibiotics have no effect against these resistant strains. The UK’s Chief Medical Officer, Dame Sally Davies, said in 2013, “‘Antimicrobial resistance poses a catastrophic threat. If we don’t act now, any one of us could go into hospital in 20 years for minor surgery and die because of an ordinary infection that can’t be treated by antibiotics. And routine operations like hip replacements or organ transplants could be deadly because of the risk of infection.’ “Disposal of the waste from intensive facilities is another massive problem. Unlike outdoor systems where waste forms part of the crop cycle and nourishes the soil, the concentrated waste from intensive facilities runs off saturated fields and contaminates watercourses and aquifers. Antibiotic-resistant organisms in the effluent can affect the health of people who come into contact with it. People living near animal factories also suffer illnesses caused by the stench and a cocktail of toxic and allergenic gasses, endotoxins, bioaerosols and antibiotic-resistant organisms.”

What impact do animal factories have on small, rural communities in particular?

“Because the true costs of intensive, indoor pig rearing systems are externalized—i.e., not paid by the producer but passed on to the pigs, people and the planet —production costs are low. This undercuts small farmers who raise their pigs humanely and do not need antibiotics because their pigs are healthy and content. “Rural communities also suffer from the impacts mentioned above.”

It’s no secret that factory farming chicken and beef also poses serious health and environmental threats, so why focus solely on pig production?

“Raising any animal in indoor intensive systems is unnatural and inhumane. We use pigs as a lens through which to focus on the entire food system, and our focus on pigs is designed to bring light to an issue about which there is insufficient public awareness.”

“Not really. One and a half high welfare, outdoor-bred sausages cost the same as two sausages from an animal factory. You can also check out our website for recipe ideas and advice on reducing meat consumption and buying cheaper cuts of meat.”

Pigs are often described as highly intelligent and nurturing. How does factory farming disrupt their natural social order and habits?

“Pigs are sociable, intelligent and very active. A woodland pig covers an average of nine miles a day exploring and rooting for food. The mother pigs make nests for their young who, as they grow bigger, play and race around, wandering off on their own or joining a group. In animal factories these natural behaviours are denied to them and they become aggressive, depressed and unhealthy.”

How would the world be different if everyone took The Pig Pledge?

How can people learn more about this campaign and take The Pig Pledge for themselves?

“Just go to our website to watch our 3-minute video and take the Pig Pledge. Our website is full of useful information on labelling and advice on how to eat ethically and sustainably without breaking the bank.”