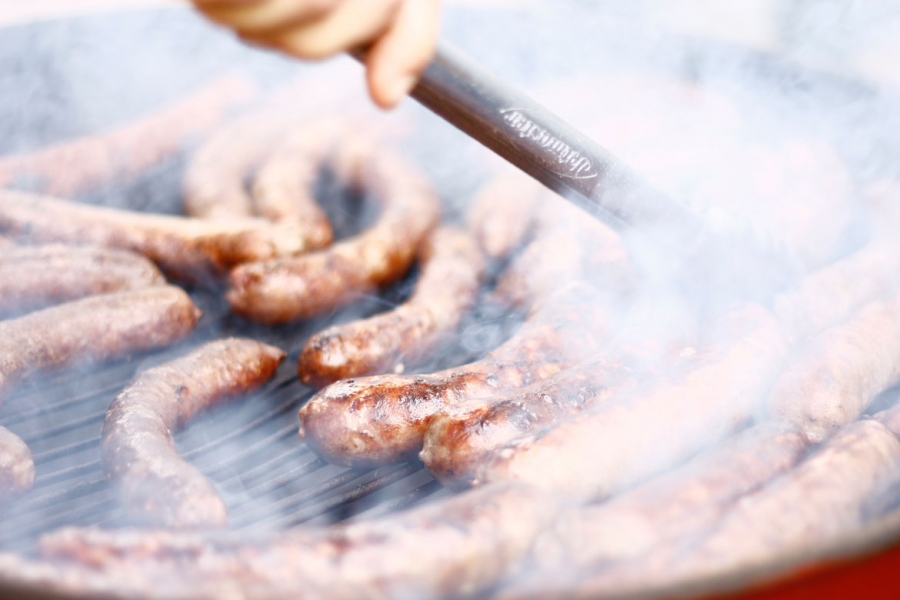 Many avoid pork because of the lurid abuses endemic in conventional pig rearing. With a little research, conscientious omnivores can still delight in bacon and porchetta.

Pigs are incredibly intelligent and social creatures who bond in close-knit groups in which females raise their young.  Conventional farming could not remove a pig further from this natural form of living.  Most pork that you find at the store or served in restaurants will come from pigs that have lived  in confinement and isolation, or alternatively, in densely packed pens that turn pigs aggressive.

The most common form of housing in the industrial pork industry is the gestation crate, which is used to house sows (female pigs) during pregnancy.  Farmers assert that gestation crates are used to protect the sow and the fetus from being injured and to allow easy access to monitor the sow’s health and feed.

Similar to the veal industry, crates are used in pork production to minimize a pig’s movement to prevent tough muscle tissue from forming—which allows pigs to fatten in a shorter amount of time as well as produces a more succulent, fatty meat.

According to a Humane Society US report, “As a result of the intensive confinement, crated sows suffer a number of welfare problems, including poor hygiene, risk of urinary infections, weakened bones, overgrown hooves, poor social interaction, lameness, behavioral restriction, and stereotypies.”

Stereotypies are repetitive behaviors formed out of social maladjustment and stressful conditions. These behaviors can include mundane movements such as rocking back and forth, or extreme behaviors such as self mutilation.

Other forms of housing

Some industrial farmers use turn-around stalls which are either lightly larger than gestation crates or, alternatively, contain a moving wall which gives way allowing a pig to turn around.

However, the most common alternative to gestation crates is indoor group housing which can keep up to several dozen sows together in an indoor pen.  This allows sows to socialize and, in some cases, may provide bedding for them.

According to the Humane Society US, “Higher sow productivity is possible in group housing than in individual crates, resulting from reduced rates of confinement injuries and urinary tract infections,  earlier first estrus,  larger litter size, and lower stillbirth incidence.”  Despite these improvements that group pens can offer, there is a more humane and natural form of pig farming.

Free range, pastured housing allows access to the outdoors, accompanied by a shelter in which pigs sleep at night.  These can be mobile shelters which have the ability to move to different pastures and other paddocks, allowing the land to regenerate after pigs have foraged, dug up roots, made nests, etc.  Pasture-based farming systems are the most natural for farm animals by allowing them to express all of their instinctive behaviors which supports both their physical and mental well-being.

Industrial pig farms fall under what the Environmental Protection Agency calls concentrated animal feeding operations (CAFOs).  In CAFOs, animals are housed in highly concentrated numbers which leads to the build-up of manure in their living space.  Due to these unclean and dense conditions, disease is easily spread amongst pigs through nose to tail contact. Through isolation and confinement, farmers have found a way to prevent this possibly threatening contact between pigs.

Crating, like the use of antibiotics in industrial farming, is a way that farmers have tried to deal with the spread of disease without actually addressing and changing an environment that promotes disease in the first place.

Further arguments have been put forth by conventional farmers; keeping sows in crates allows them to monitor their food consumption and health, removes pigs’ ability to damage themselves or their piglets, and provides accessibility for insemination, vaccinations, or other treatments.

Despite these arguments, crates have been banned in Sweden, UK, New Zeleand, and was phased out in the EU by 2013, whereafter they may only be used for the first four weeks of a sow’s pregnancy.  Unfortunately, gestation crates are still prevalent in the US where they have only been banned in Ohio, Arizona, California, Colorado, Florida, Maine, Michigan, and Oregon.

Two other practices are common in conventional pig farming—tail clipping (amputation) and castration. Tail clipping is practiced to prevent the tail from being bitten off by other pigs, a result of stress induced aggression which is common in CAFOs, which could lead to infection.  Castration is often conducted without anesthetic and is done to reduce aggression in boars and to abate the unsavory flavor that comes from the increase of testosterone at sexual maturity.

The most natural way to raise pigs is in a free range, pasture-based environment in which they can express their natural instincts and feed from their local food-shed.  Providing clean, uncrowded living environments removes the need for tail docking.  Pigs, like all animals, should be subject to the least possible stress before they are slaughtered, and rendered insensible to pain prior to being killed.

Third party certifications can help meat eaters choose pork products that are both healthier and carry a lighter moral burden.  While certified organic pork products do offer some protections against the worst abuses, such as continuous confinement, sometimes the most humane and sensible options come from farms that are not certified.

Marin Sun Farms is a perfect example of a small meat producer that sources from local farmers who practice humane, pasture-based methods of raising their animals.  These farmers keep their pigs on pastures and free range paddocks during the day and provide a spacious barn with plenty of bedding to keep the pigs warm during the night and winter months.  These pigs are never given growth hormones.

Another example is Niman Ranch, a larger meat producer that works with farms across the US who practice Niman Ranch-approved methods of ethical animal raising. Niman Ranch farms are also free range, decline the use of both growth hormones and antibiotics, and use vegetarian pig feed (although notably pigs are omnivores—when raised on pasture they will seek out animal protein such as bugs and grubs).

Neither of these meat producers are certified organic.  David Evans, farmer and owner of Marin Sun Farms, has declined certification because he reserves the right to use antibiotics in the rare case that one of his animals gets an infection. In organic farming, if an animal gets an infection, it will be sold into the conventional industry.

“I don’t see any reason why that animal should be condemned to the industrial system, and I’m very clear about that in my marketing, about how we handle our antibiotic policy,” David commented.

“There is currently a shortage of organic grain in this country, making feeding only organic feeds particularly difficult. We believe a better use of those limited organic grains would be direct human consumption. More and more of the organic grains and soy currently available in the U.S. are actually imported from distant lands, mostly Brazil and other Latin American countries. We do not support importing feeds from distant foreign countries, believing instead that any feeds given our animals should, to the greatest extent possible, be grown by our farmers themselves or local farmers.”

As always, labels such as organic are a start, but the best way to make sure you are enjoying humanely raised pork is to do a little research and find a pasture-based farmer with a good reputation.  They should either have all the information you need on their website, or be willing to answer your questions clearly.  If they are not certified organic or humanely raised, they should be able to explain why.

Find out more about how to buy humane, healthy and sustainably raised pork in our Sustainable Kitchen Guide to buying meat.

Ractopamine in Pork. What is it?

Braised Escarole with Bacon and Mustard