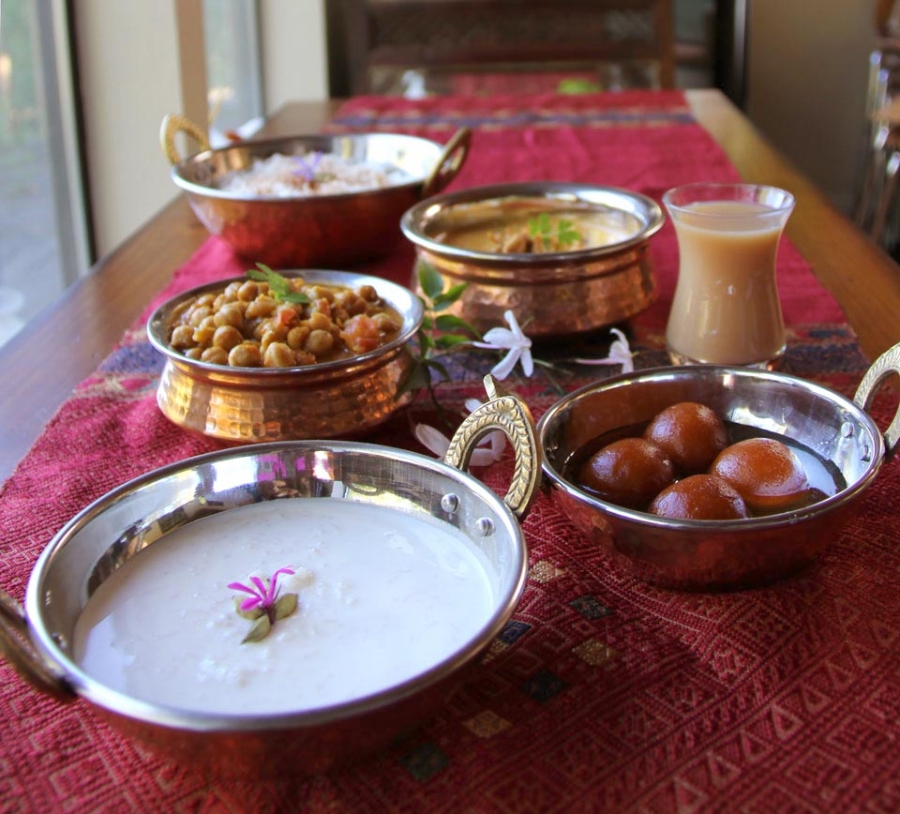 This year on November, firecrackers will sound throughout the streets of India, as well as many other countries around the world, in celebration of Diwali—the festival of lights.  As modern lifestyles focus on health and sustainability, traditional festival foods are changing, too.

One of the principle Hindu holidays, Diwali is a celebration of Lord Rama’s defeat over the demon king Ravana, who kidnapped Rama’s wife, Sita.  People rejoice in the reuniting of the happy couple and the defeat of wickedness, by illuminating their homes with a multitude of lanterns, keeping evil at bay.

Celebrated by Hindus, Sikhs and Jains alike, today Diwali tradition calls for a cleansing of the house, quite literally by washing both floors and walls with water.  Candles are lit at every entrance and window to ward away evil spirits, prayers are uttered throughout the five day festival, and businessmen say a special puja (prayer) to the goddess Lakshmi to bring wealth to their establishments.

At the heart of Diwali is a celebration of food, which calls for five wonderful days of indulgent eating with family and friends.

A holiday coated in ghee and sugar

Prevalent amongst these sweet dishes are variations of cottage cheese balls which are fried, baked or boiled, and either made or served with some form of sugar.  An example of such a dish is sandesh, a type of fried cottage cheese, or paneer fudge which is flavored with nuts and spices.

“It’s all about sugar and fried carbs and how much of them you can get into your body,” shared Nivedita, who grew up in Eastern India.

Other delectable sweets that you may find served during Diwali are halwa, a sticky, creamy nut cake; barfis, a sweet confectionery typically made out of a combination of condensed milk, coconut, dried fruits and perhaps even a little pistachio or saffron; and no Diwali would be complete without kheer, a rice pudding desert.

During the holiday, there is a particular emphasis on family.  However, both friends and acquaintances within the community will visit the houses of one another, pouring in throughout the day to munch on some barfis and often bearing a gift of laddu—flour and sugar based truffle-sized balls—or perhaps a box of another type of sweet.   This is also a time of year in which bonuses are often given out to those in the service industry by their patrons—accompanied, of course, by a box of laddu.

The savory side of Diwali

Although the snacks that are eaten throughout the day are most often sweet, the main meals served during the festival feature delicious, fried savory dishes.  Among these are puris, which can be sweet or savory, and will often be found as a main dish during family feasts.  A puri is a puffed, fried disk of dough, the flavors of which differ throughout the country as recipes may involve an array of spices either kneaded into the dough or added after frying.

Another dish served at the table is paratha, a pan fried, flour based dough which is served with ghee (clarified, toasted butter) and accompanies a variety of vegetable dishes as well as chole (curried chickpeas).  Many of the chaats (savory snacks) that you will find at the table will be garnished with sev, a crisp vermicelli-like noodle made out of gram flour.

Although most of the country is vegetarian, in the Eastern part of India, it is tradition to break food restrictions for the festival and sacrifice a goat, out of which a delectable mutton curry is made.

Chai will always be served to guests as well as enjoyed by the family, and although there is no traditional beverage drunk during Diwali, Indians have inherited from the English a taste for Scotch whiskey as a celebratory drink.

Traditionally, the festive dishes of Diwali are made by the women of the household over the course of several weeks prior to the holiday.   However, with today’s busy lifestyle and an increasing number of women entering the workforce, this tradition is beginning to be lost—and with it, a variety of family recipes that have been passed down from generation to generation.  Since work schedules do not permit time for all of the usual holiday preparations, many have begun to buy pre-made Diwali treats from the store.

In a conversation with Nivedita, she noted that the taste and quality of Diwali food has seen a rapid decline as more and more of the ingredients to make the traditional food are no longer sourced locally, and are heavily processed and filled with preservatives.

Nivedita has witnessed this decline just within the past three generations of her family.  For instance, in order to make kheer, Nivedita’s grandmother sourced the rice and sugar from her own fields, and the milk from her own cow.  When Nivedita was growing up, her mother would travel to the city to purchase her Diwali ingredients.  Now living in the US and managing a busy workload, Nivedita admitted that she doesn’t have the time necessary to prepare all of the festival dishes, and tried store-bought kheer for the first time.  After tasting it, she wondered if the bland taste could be attributed to water being added to the milk and strongly doubted that the rice was of good quality.

Similarly, the sacrificial goat used to make mutton curry in Eastern India is no longer raised by the family, but rather purchased from any convenient butcher.  Raising a sacrificial goat for Diwali used to have its own ritual surrounding it, including allowing the goat to graze in the pasture on a regular basis and keeping it in ritually clean conditions.

“When things were made in the home, you knew what was going into your food,” reminisced Nivedita.  “Now with manufactured products, you don’t.”

Today’s lifestyle not only impacts the types of foods eaten during Diwali but also the body’s response to them.  Up until quite recently, lifestyles were much more physical.  Indeed, during Diwali women would often walk several miles just to get certain ingredients to add to their festival cuisine.  This type of lifestyle could easier accommodate a sugary, deep fried carb overload once a year.  Nowadays, as Nivedita put it, you can put pounds on in seconds.

From Mom with love: Complete Guide to Indian Cooking and Entertaining