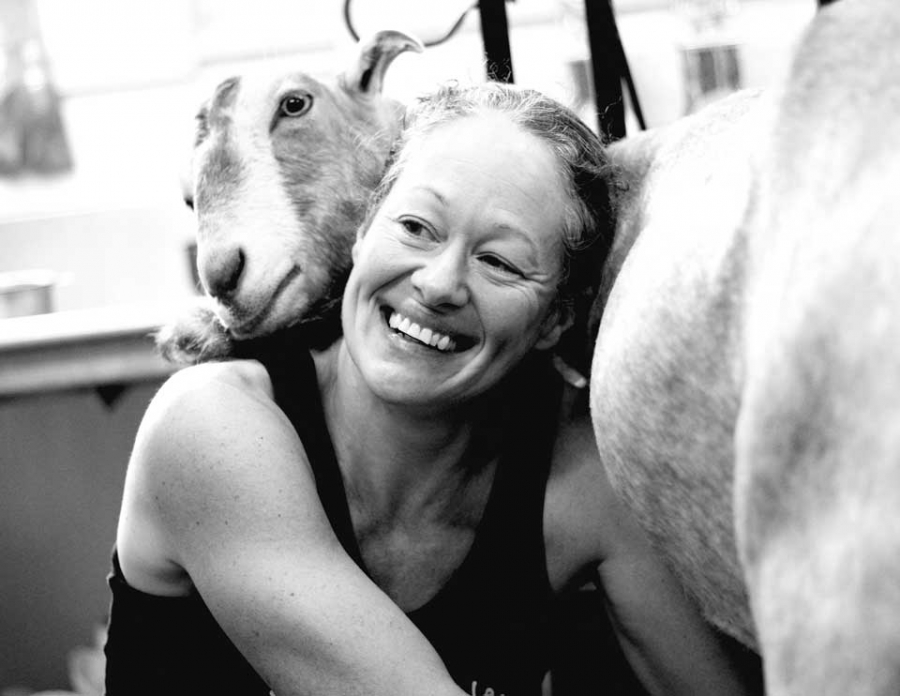 Iowa photographer Marji Guyler-Alaniz has been getting lots of attention for FarmHer, her captivating photography series highlighting female farmers.

Inspired by the now famous 2012 Dodge Ram Superbowl ad, a tribute to farmers that featured men almost exclusively, Guyler-Alaniz has been criss-crossing the state documenting female farmers from the field to the barnyard. Though women now make up roughly 30 percent of the U.S. farming work force, FarmHer is the first project of its kind to draw attention to the increasingly diverse face of agriculture. As Guyler-Alaniz captures more and more “FarmHers,” she hopes both perceptions and attitudes will begin to shift as well.

Not many people can say their life changing moment came in the middle of the night, but for you it actually did. Can you describe how you made the decision to start FarmHer, and why you feel driven to document the work of female farmers?

“It all started last year with a Superbowl commercial depicting the ‘American Farmer.’ About a month later, I read a story pointing out the lack of women in that commercial, and really in agriculture everywhere, which was eye opening for me. I had recently left an 11-year career in agriculture, and honestly never even realized there were so few images of women. So, the story stuck with me. A few nights later I was laying awake in the middle of the night thinking about how thankful I am for all of the good in my life, and what I could do to give more to others. That is when the idea literally hit me. I woke up my husband and told him immediately. A few days later, FarmHer was born! “I think it is so important to document female farmers because women always have been an important part of our agriculture systems, but have never really been depicted as the farmer. The number of women in agriculture is growing at a fast pace, too, so I think it will be even more important for future generations to understand who a farmer really is.”

Was it difficult to find subjects initially, or were female farmers eager to share their experiences?

“In the beginning I had no idea how to start, so I contacted two women who were interviewed in the newspaper article I’d read about the Superbowl ad. I totally expected rejection, but they were both willing to participate. I think that took a lot of trust on their part. They had no idea what to expect, whereas now, people are excited to have me photograph them because they know what the end result will be. Everyone I have photographed has been so nice, and so happy to help.”

Your subjects seem so at ease before the camera. Do you spend any time developing a relationship with these women before you start shooting?

“We usually do a lot of talking via email, and maybe a little over the phone but not much. Some of the women, like those working in a farm training program, had no idea I was coming until I showed up. So, the answer is no. Personally I talk a lot, and I think that opens people up. I also try to spend at least a few hours with each woman. Usually they are a little tense at first, but always warm up as we go. Plus, I document rather than pose, so I think that helps. These women are in their element, working – the camera is just a side item.”

Even without words, your images include so many personal elements, and really tell a story. However, very few are portraits. Was this intentional?

“Not really. It’s because I try to follow along and not dictate the photograph. Because of that I am usually off to the side or behind a person, so I catch those things. That is also just my style of photography; I like to find the beauty in the details. I have a few face shots, but these women are usually talking or concentrating on their work, and that doesn’t really lend itself to many face shots.”

Your photographs do a wonderful job of encompassing not just the woman, but also the animals and all the hard work that goes into running a successful farm. What has this journey taught you about what it takes to grow food today?

“It has been eye opening. It’s a major effort and truly a labor of love, regardless of whether they are working on a large farm, a small farm, or somewhere in between. It takes dedication and a great level of care and concern.”

Women currently represent the fastest growing segment of the nation’s farmers, and today nearly one million women work the land. Why do you believe female farmers are still so overlooked?

“Honestly, I think that is just the way it has always been. I don’t believe people have really thought much about the image of a farmer. I know I hadn’t. However, women who may not have a lengthy agriculture background are now choosing to enter the field for a variety of reasons. Maybe they care about the food their families or communities eat. Maybe they have a connection to the land, or are unsatisfied in their current career. I just hope FarmHer opens eyes everywhere, and that we start to get a true picture of what agriculture looks like today.”

Has building relationships with these farmers, many of whom seem to work on small scale and organic operations, impacted your own relationship with food?

“I have always considered myself to be a healthy eater. We don’t eat a lot of processed foods overall in our house, so that means fruits, veggies, meats and dairy. That is the way I was raised. However, what it has done is open my eyes to how my food is produced and where it is raised. I realize more that I have a choice in where I buy and what I eat. It’s also helped me understand the importance of supporting all types of agriculture in my community, whether the food stays right here or is used in more commercial production. I believe there is a place for all kinds of agriculture. It’s up to each person to decide what is important to them, and make informed decisions.”

Why do we need more images of female farmers?

“I want our children, the next generation, to understand who really grows their food. Also, it shows our society that women are out there, doing this really hard (emotionally and physically) work.”

What ties did you personally have to agriculture and the farming industry prior to starting FarmHer?

“I am from, and still live, in Iowa where you can’t throw a rock without hitting a field or barn. Growing up in my small community agriculture was prevalent in so many ways. So, I have always known agriculture to be a way of life. Though I never farmed myself, my grandparents were farmers and my uncle and cousins still farm the family land. “After college I spent 11 years working for a large agricultural company. I had many roles there from Marketing to Senior Management. Through that job I was also immersed in agriculture.”

So far you’ve concentrated primarily on Iowan farmers. Do you have any plans to take the project to other parts of the country?

“I do! I am currently working on a business plan to take FarmHer to the next level. This will help me expand to other areas, though it will still be a slow going process. In addition to FarmHer I am also a full-time mom to a two and four year old, and it’s important to me to spend as much time as I can with them while they are little. Once they are in school I will have more freedom to travel further.”

You’ve been documenting female farmers via FarmHer for just under a year, and have already received amazing feedback and press. What are your goals for the project?

“I hope to find some outlets for photography shows. These images are amazing when shown large and in person, and I want more people to see that. I also hope to find a way to work more with the USDA to possibly integrate these images into our educational system and get the idea through to the next generation. I also will continue with the FarmHer clothing and selling prints and stock photography online. There is so much more to come!”

Sheepish: Two Women, Fifty Sheep, and Enough Wool to Save the Planet

Bootstrapper: From Broke to Badass on a Northern Michigan Farm