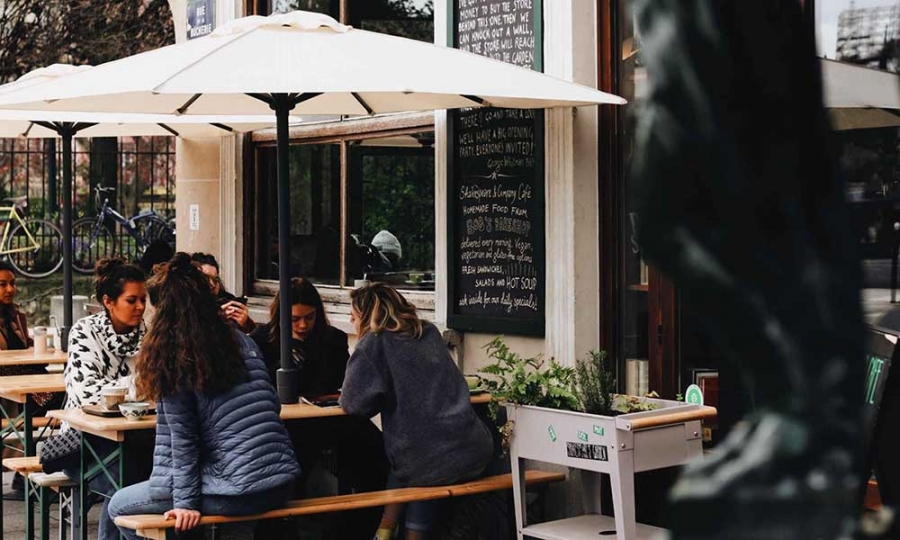 Does price trump sustainability when eating out?

Patrons of Sellers Markets are greeted by large, vivid signs as they enter the fast-casual restaurant that promote its commitment to providing organic, local, and sustainable foods.

“At Sellers Markets we are committed to using LOCAL ARTISANS who practice SUSTAINABLE AGRICULTURE.  Why?  Because it’s the RIGHT THING TO DO and it tastes better,” states one of the signs that emphasizes key words—in case the onlooker does not care to read the whole sign, at least they get the point.

Despite owner Deborah Sellers’ attempts to educate her patrons, she seemed ambivalent whether or not people really took notice.  Situated in the Financial District of downtown San Francisco, California, Sellers Markets caters primarily to business people and office workers searching for a place to eat during or around work hours.  In the short amount of time allotted for breakfast or lunch, many make their decisions based on convenience coupled with price—and little more.

What factors ultimately dictate what we chose to eat?  Where does the cost of a meal intersect with the value of eating clean, sustainable food?  Do we bring our values with us when we eat out?

For a business, of course the bottom line is price.  Because the consumer is willing to pay more at the supermarket but not at the restaurant so if you’re perceived as an expensive restaurant then it’s not going to work.

For the average American, one in every 5 meals is eaten out—over four meals each week.  Some people may have split standards, being mindful of the provenance of their food at the supermarket, while becoming lax with those values at the restaurant table, especially when they eat casually.  The Green Restaurant Association reported in a recent study that 79% of people polled said they would be more likely to dine at a Certified Green Restaurant® over a non-certified restaurant.  However, the study did not ask if this would still be the case if there was an increase in price.

The amount of promotion a restaurant engages in to educate their customers about their commitment to sustainability can be precarious, as noted by Cliff House general manager Ralph Burgin.

“A lot of things we do here—we do it because we know it’s the right thing to do. And sometimes the public doesn’t want to hear all of the details so we have a hard time explaining it because you come here as a guest…You don’t want to hear about the ills of the world, you know, you’re here to enjoy yourself.”

Some people go to chain restaurants a lot because they know what they are going to get—they go for consistency, for the quality, for the comfort or whatnot.  And then there’s the type of public that really cares about their food, not only when they go to the grocery store—but when they go out to eat. They don’t mind paying a few extra dollars if they know that their food came from the farm down the road, for instance, rather than a big chain supplier.

High end restaurants—especially those known for crafting their menus from local, seasonal ingredients—may have an easier time passing on the costs. Diners at Nick’s Cove Restaurant, a destination spot overlooking the waters of Tomales Bay, California, expect the menu to reflect the seasons and bounty of the surrounding Marin-Sonoma foodshed.  Executive chef, Austin Perkins, said patrons are generally well informed.  “It is northern California, after all.”  He went on to say that if he strayed too far from sourcing local, he’d “hear about it” from some of the patrons.

When asked about the cost or difficulties of sourcing locally, especially sustainable fish, he said it did not present any significant challenges.  Situated in the heart of an area abundant with locally caught fish, oyster farms, pastures of mindfully raised livestock, and home to award winning artisan cheese makers, the supply is well developed. As for the cost, “The people who come here expect it,” said Austin. Read our interview with Austin Perkins here.

Does it really need to cost more?

Leaving aside the dilemma of how best to present a restaurant’s sustainability efforts through labeling or signage, there are ways a restaurant can offset price increases that may come with sourcing locally and ethically.  LEAF, for example is a restaurant sustainability consultancy in Canada that works with restaurants to implement environmentally friendly practices and technology that can significantly reduce a restaurant’s cost.

I don’t think it’s always accurate that a restaurant has to pass a slight price increase onto the customer, although lots of times they do.  One thing that we really strive to do is to work with the restaurant to reduce their costs in other areas.

The factors that can offset operational costs usually fall under electricity, water, and waste conservation.  LED lighting, censor run smoke hoods, and environmentally friendly washing machines that use less water are examples of the different ways restaurants have found they can reduce their electric and water bill.  Landfill tipping fees can also be greatly reduced by initiating a recycling and composting program, along with implementing simple changes such as switching from sugar packets to a sugar condiment container, thus eliminating excess packaging from the start.  Moreover, Janine indicated that as more restaurants establish strong relationships with local producers, prices for local, sustainable food may begin to even out, eventually becoming more competitive with the cost of conventionally grown foods.

Furthermore, Leigh Belanger, program director for Chefs Collaborative, commented on chefs’ proficiency when it comes to working with pricing their ingredients.  “I think also chefs have gotten really creative…this is something they learn and know how to do—which is control cost but still be creative on the plate.”

Learn more on local and seasonal food in our featured article Farmer, Distributor, Restaurant: Getting Local Food on the Plate or in our How to Eat More Local Foods in Season column.