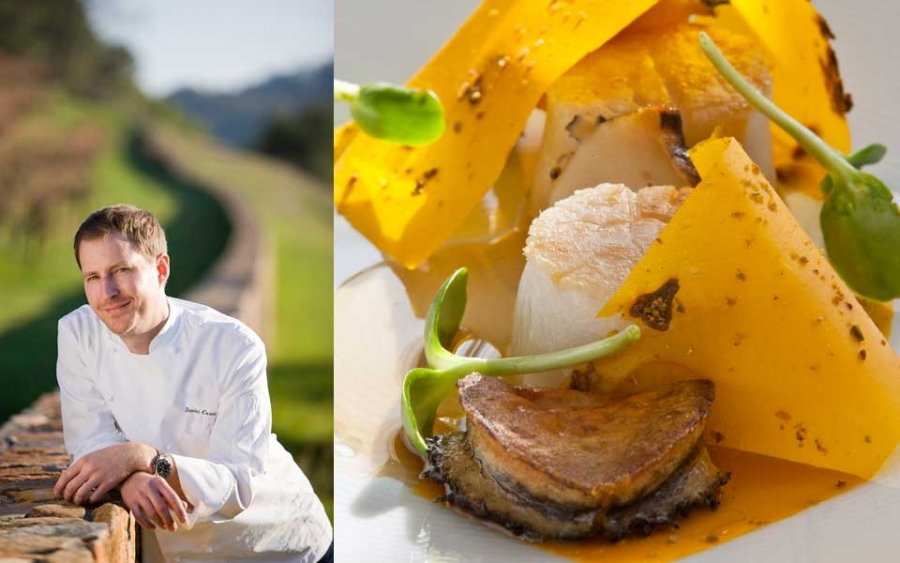 Chef Daniel Corey talks to us about seasonal menus, Luce’s green certification and the trend toward sustainability in the restaurant industry.

Long before San Francisco-based restaurant Luce received its official Green Dining Certification from the Green Restaurant Association, the establishment had already committed to keeping things fresh, local, seasonal and sustainable. Today Luce is one of many Intercontinental Hotel Group restaurants to have earned the green distinction, thanks in part to the kitchen culture established by Chef Daniel Corey. Under Corey, the globally-inspired fine dining destination has earned a Michelin star for five consecutive years, while continuing to minimize its environmental impact. From sustainably produced wines to locally sourced tomatoes, Luce is proving that a sumptuous meal starts with a solid commitment to sustainability.

You’ve previously described the Luce menu as local and artisanal, and have referred to “seasons within seasons.” Can you give an example of one of your favorite hyper-local, hyper-seasonal dishes?

“Well, we’re right on the cusp of spring, so we’re starting to get some ingredients that really represent that season within a season concept. Right now we’re doing a jumbo asparagus dish in different ways. We have some roasted asparagus, some raw shaved asparagus, asparagus puree, and then some different takes with lemons. We have a lemon merengue, a savory lemon curd, preserved Meyer lemon zest. It’s hyper local. It’s produced here within the Bay Area.

“It’s also hyper seasonal because these products are only available for a short period of time. That’s kind of what I mean when I say ‘seasons within seasons,’ because spring’s not over but asparagus will be gone long before we get to summer.”

In addition to food, Luce also puts an emphasis on fine wines. Do you specifically seek out vineyards with a similar commitment to sustainability?

“We do seek out certain vineyards with a focus on sustainability, and often times they seek us  out. They like the idea of serving their wines in an environment where we value those ideals with the food, as well.”

Earning a Michelin star and cooking at the James Beard House seem to signal that you’ve really arrived as a chef. Have these honors offered you a greater platform to promote greening the industry?

“For me personally, yes. Earning the Michelin star was a huge honor, and cooking at the James Beard House—things of that nature—they lend a little credibility to you. People are more interested in what you have to say. You get approached to talk more than if you were a chef who didn’t have those accolades.

“I like to not preach [sustainability], but extend those ideas and philosophies as much as I can. You just don’t get the chance to have that platform until you reach a certain level of exposure. I’m very fortunate.”

You were also the driving force behind Culinary Clash, a five week cooking competition for students of the California Culinary Academy. How do you feel the next generation of chefs will impact sustainability in the restaurant industry?

“I think the trend is really going to be towards greater sustainability. Based on my experience with the Culinary Academy, I think students—and just people in general—are much more aware of the idea of sustainability, being local, not cooking from a can.

“In California, in the Bay Area for sure, it’s almost expected. Especially the students from the Culinary Academy here in San Francisco, it’s ingrained in you. It’s everywhere you go, everything you see. I think whether you’re a culinary student or just a casual foodie, sustainability is the trend for sure.”

How did you first hear of the Green Restaurant Certification, and what made you decide to pursue it?

“It started with the hotel management. When they came to me and said, ‘We need your help to be Green certified,’ it just made sense. We were already using Energy Star-rated ovens, getting our deliveries from farms, etc. A lot of things I was already practicing in the restaurant fell right in sync with achieving the Green Restaurant Certification for the hotel as a whole.”

How did the process of earning the Green Restaurant Certification make you more aware of your menu and kitchen practices?

“We were pretty much already aligned with the requirements, so we just had to make everybody aware of them. I think we get better at it every year. We’re getting more and more farm deliveries. We’re sourcing ingredients a little more carefully. We’re finding ingredients from smaller places in smaller batches, and going back to seasons within seasons and hyper local produce.

“I think what we started with was fine, but we’re still getting better at being green.”

Do you think it’s difficult for a restaurant of your scale and level to make the sustainability switch?

“Yes and no. There are  certain things we have to have on the menu because Luce serves breakfast, lunch and dinner, and we handle all the [hotel] room service orders out of the kitchen as well. So there are certain things people expect, like a club sandwich. So, we need tomatoes. When we get those tomatoes it’s important that they’re hot house-grown, something local.

“The sustainability switch for things that aren’t in season is maybe the hardest. You still want to source them locally, but of course tomatoes can’t grow in November without a little help from a light or a greenhouse.”

What items do you produce in house, and how does crafting your own products help meet Luce’s sustainability goals?

“Depending on the menu or the scale of what we’re doing we try to make everything we can.

“We make bread, cheese, pickles. We do all our butchering in-house. We make the sausage. We cure hams. We make salt cod if we’re going to do a brandade. All the desserts we produce in-house, all the ice creams and sorbets. Everything within reason that we can do, we try to do.

“When we do change the menu we keep it in line with that same philosophy of, we want to keep this dish on the menu, but we want to personally make as many ingredients or garnishes as we can in-house. It’s part of the menu planning process for sure.”

We’ve heard that you keep a photo of the Dalai Lama in your office. Has he inspired any Luce creations?

“He doesn’t really affect the menu. Even though we get very busy, and things get stressful, the picture reminds me to be kind and have a little perspective. For me, he’s kind of a symbol of being level and remembering that it’s never as bad as it seems.”