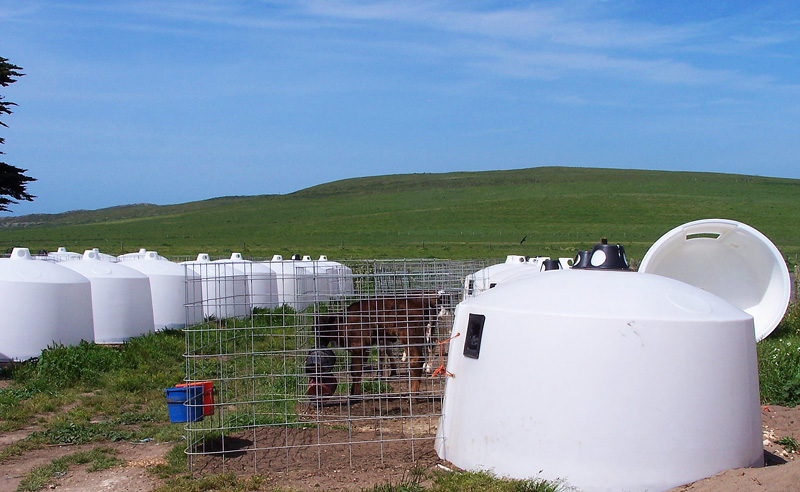 Many exclude veal from their diet on principle.  And vegetarians avoid meat altogether. Yet anyone consuming dairy products may still inadvertently be supporting the production of veal.

Aside from a very few farmers who eschew it, veal production is, after all, a by-product of the dairy industry.  Dairy cows must give birth once a year in order to continue producing milk. Female calves can be used to replenish the dairy herd, however, bull calves have very little purpose on a dairy farm, as only few are used for breeding, and they are not used for meat purposes once they are past maturity.  Many find their strongly flavored meat unsavory. Dairy farmers usually take male calves from their mothers when they are a few days old, after which they are sold and transported to a veal producer’s farm, where they will remain until slaughter, usually 16-18 weeks after their birth. The issues surrounding veal production include: taking a calf away from its mother at just a few days old, subjecting an infant animal to the rough conditions of transport, the bare confinement that many conventional veal farmers use and the youth of the animal when it is slaughtered.

Walking down the meat isle at the grocery store you will notice that there are several different types of veal, usually labeled white, red, or pink veal. Two types of veal are recognized by the USDA—bob veal, which is slaughtered at up to three weeks of age—and special fed veal (better known as white veal), which is typically slaughtered at 16-18 weeks.  Both are fed a special liquid milk replacement, a milk-like formula that contains protein and nutrient additives.  These two types of veal make up the bulk of the industry in the US. Another type of veal which is not recognized by the USDA is grain-fed or non-special fed veal, which comes from calves whose diet of liquid milk replacer is accompanied by grain and forage.  The flesh of these veal calves is generally darker than the other two, which gives it the name red or pink veal.  This type of veal is not common in the US but makes up the bulk of the veal industry in Canada.

Calves destined for the veal trade can be taken away from their mothers not only in a matter of a few days, but in some cases a few hours after birth.  In the first few days of a calf’s life it is very important for them to drink colostrum, the milk all mammals produce for several days after giving birth.  Through colostrum immunoglobulin is transferred from cow to calf, which is essential to the development of a healthy immune system. Although colostrum is often milked from a cow and given to female calves, male calves are fed a liquid milk replacer, as more importance is put on the long term health of a future dairy cow than a male calf who will be slaughtered in a matter of weeks. Liquid milk replacer is intentionally low in iron in order to create a paler pink meat, which many consumers believe to be of higher quality and thus will pay a higher price for.  If fed exclusively on liquid milk replacer a calf with suffer from anemia. All liquid diets do not satisfy a calf’s natural desire to ruminate and chew.  When fed exclusively on liquids, a calf will repeatedly chew, suck, and lick inanimate objects, which often leads to mouth injuries.  This stereotypy is also exacerbated by the lack of social activity, the inability to groom itself due to confinement, and the lack of natural, exploratory stimulation.

There are four methods of housing currently used in the conventional veal industry. The first, and most controversial method, is to confine newborn calves in crates.  These crates are small, sometimes only as wide as two feet, which restrict a calf’s movement increasingly as it grows.  This restriction prevents any development of muscle tissue, resulting in a more tender meat. A second form of housing is a hutch—which resembles a small igloo—with a small fenced off area at its opening which allows the calf space to take a few steps outside its shelter.  These hutches are considered a kind of nursery for calves newly separated from their mothers to allow them to build up their immune systems before moving to a stall or group pen. Stalls are another form of individual housing which isolates calves from one another.  Individual housing is often used to prevent the transmission of disease, which is an all too common plight in the packed and unsanitary conditions found in industrial farming.  Similar to hutches, stalls too restrict a calf’s movement and do not allow for social interaction or comfort.  Cows are social herd animals who normally engage in regular physical contact with their young and amongst each other. Group pens allow calves to interact with one another and provide a larger space for them to move around.  This form of housing is considered by some as a more humane alternative to hutches and stalls if kept clean and an adequate source of bedding and ventilation is provided.  However, if done improperly, group pens will see overcrowding, trampling, and bullying amongst calves.

According to the Canadian Federation of Humane Societies(CFHS), “Although confinement is economically beneficial to farmers, it causes various health problems including leg and joint disorders, indigestion, diarrhea, muscle atrophy, chronic pneumonia, and wounds from rubbing against the crate.” The Humane Society of the United States (HSUS) has helped pass legislation banning crates in Arizona, California, Colorado, Maine, and Michigan.  Similarly, veal crates have been made illegal in the UK and in the EU, both of which also ban individual housing past eight weeks of age, and require calves be given fibrous food and sufficient bedding.  This marks progress for humane treatment of veal calves.  However consider, unless it’s bob veal, that eight weeks is half a newborn veal calf’s life spent in solitary confinement.

Home on the range

The most humane and natural method of raising veal calves is to let them grow up alongside their mothers or surrogates on free-range pastures, feeding off of their mothers’ milk and grass instead of the usual grain and milk formula diet fed in industrial veal farming.  Such a method is applied to Strauss Free Raised® veal who, on top of living in a healthy and natural environment, are never treated with antibiotics or growth hormones. David Evans, farmer and owner of Marin Sun Farms, has found another alternative method of raising veal calves by using a surrogate mother. “We’re starting to use some bull calves from some of the local dairies to produce veal. A lot of people are opposed to veal. I don’t know how you feel about it, but the fact is most of these dairy calves are taken away at a couple days of age, and they go get killed somewhere and boned out for whatever meat they have, and it ends up in ballpark franks or something,” stated David. “What we do is, we’ll take some of those bull calves and we’ll put them on a surrogate mother, usually an older dairy cow who gives enough milk to raise two or three calves. She’ll raise out those calves for four months and bring them up to four-hundred, five-hundred pounds, and then we’ll market them for veal. So they have a pretty ideal life for a calf. They have a normal life. They have a mother.” Allowing a calf’s mother to raise it is not always a viable option, as farmer Mark McAfee of Organic Pastures discovered after experimenting with this method on his dairy farm. What Mark found was that 70% of the time cows would leave their young to be eaten by coyotes or be trampled, as their maternal instinct had long been bred out of them after generations of never having to fend for themselves, or their young. Mark prefers to put his calves in group pens, raise them on real milk, and then release them back into the herd once they reach seven to eight months of age.  Instead of being used for veal, male calves are raised to maturity to produce Organic Pasture’s 100% grass-fed ground beef. “I am repulsed by veal.  I absolutely will not participate in it at all and nobody here believes in it.  I just think that it is horrible to kill young babies.  It’s just not what I do.  So we grow all of our cows to maturity where they have a full life on green pastures and at maturity the steers, which are castrated bulls, are sent to our ground beef program which is an animal welfare approved slaughter process which is humane,” explained Mark. Despite the progress being made in humane methods of raising veal calves, the issue still stands with many that slaughtering such a young calf is unethical.  Because of this, even ethical meat eaters often choose not to partake in this meat.

For those who do choose to eat veal it is imperative to be 100% sure of the methods used to raise the animal and requires further consideration—by carnivores and vegetarians alike—of the contribution dairy consumption makes to the production of veal.

Have your read our Sustainable Kitchen Guide for buying humane, healthy and ethical milk, cheese and dairy?

Find it here. Devil in the Milk: Illness, Health and the Politics of A1 and A2 Milk