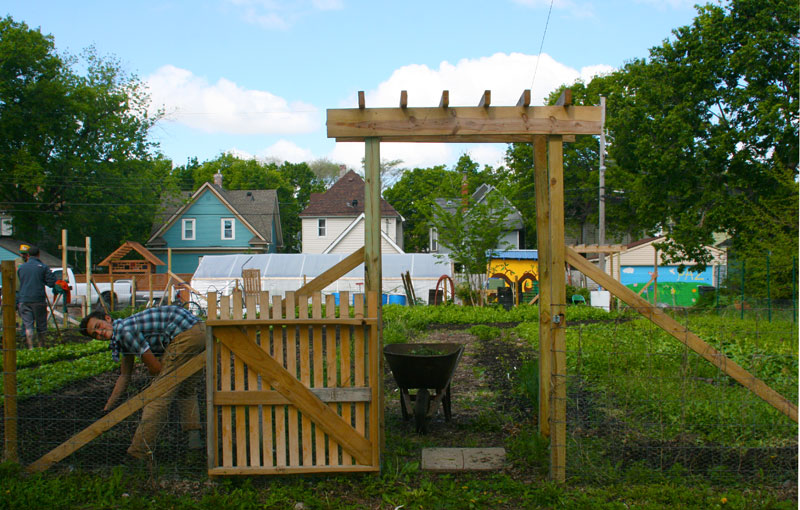 Urban farms turn to crowdfunding websites to bring their projects to life.

Since the 1950s, the global population has flocked to urban centers around the world. According to the United Nations Millennium Development Goals Report from 2007, about 50% of the world’s population lives in cities and many more are expected to migrate to urban centers within the next few decades. However, the majority of the world’s food production is grown outside of urban centers and transported long distances. The Worldwatch Institute calculates that the average food item for the American table travels 2,000 miles; that is equivalent to the distance between the Pacific Ocean and the Missouri River.

Bringing the farms back

Urbanites desiring local produce, as well as a way to revitalize blighted city lots, are creating a new wave of urban farming. Many abandoned city plots—most the remnants of long-ago razed buildings and backyard victory gardens—are being revived through urban farming. Many of these urban farms are successful in being sustainable. They utilize not only the horizontal space available, but the vertical space by incorporating vertical planter boxes and companion planting. Urban farming brings communities together by reconnecting people with the land, educating individuals about nutrition and local produce, and teaching others how to grow quality food—a skill that has often been lost.

One of the problems with urban farming is financing; this is especially problematic for community-oriented groups that must often rely on volunteer labor and donations of supplies. Many urban farms have been able to overcome this hurdle through cooperative pooling of funds and resources, generally through the internet. This method, known as crowdfunding, has been used not only to support urban farms but disaster relief, small business startups, artistic endeavors, political campaigns, and community projects. Many urban farmers have been successful raising money through crowdfunding sites such as kickstarter.com. Kickstarter is not about raising money for charity; rather, it focuses on helping fund creative projects such as art, music, games, food, design, and technology. Kickstarter’s funding platform is rather simple. People post information, photographs, and videos about their project and what they need for the project to be successful. They will often offer some method of acknowledgement or small gifts to those who support the project. One of the things that make Kickstarter unique is that donors are not charged unless the project meets its funding goal within a 60 day period. This ensures that projects will only be developed if sufficient funds have been pledged. If the project is completely funded, Kickstarter collects 5% of the collected funds. Here are some examples of urban farming projects that have been successful at funding their projects through Kickstarter.

Stone’s Throw Urban Farm in Minneapolis, Minnesota, used Kickstarter to fund its expansion to eighteen urban farms and a 100-member vegetable Community Supported Agriculture (CSA) initiative. As an unconventional newly started business, the farmers at Stone’s Throw were not confident they could secure a business loan and wanted to avoid loans if at all possible. They asked for $15,000 and received $15,908 from 347 individual backers to purchase garden equipment and supplies in order to transform vacant urban lots into miniature urban farms. Donations ranged from as little as $10 in return for a personalized thank you note to more than $750 for a full share in the Stone’s Throw CSA. They reached half of their goal within the first week, followed by a long lull and then surpassed their funding goal in the last week of their donation period. Stone’s Throw is an example of how many urban farms are using crowdfunding to help with financial shortfalls.  They were able to use Kickstarter as an alternative to a business loan. They advertised their project through email, posting flyers around the city, and the use of a QR barcode which, when scanned with a smartphone, loaded the project’s Kickstarter website. “A lot of it was a gamble and we were really amazed and supported by how encouraging the community was and how excited they were about the project,” said Alex Liebman, a farmer at Stone’s Throw. Read our interview with Alex of Stone’s Throw.

Raleigh City Farm raised $5,344 more than their goal of $10,000 to transform a vacant lot to a volunteer-run urban farm. The project attracted 362 backers with donations ranging from $1 to more than $500. Having few assets for gifts, Raleigh City Farm primarily acknowledged their backers by commissioning original artwork from local artists and by immortalizing donors’ names in an artistic manner on the farm.

As a social enterprise start-up that doesn’t fit neatly into traditional methods of accessing capital, utilizing crowdfunding through Kickstarter was a great way for us to raise funds. While pulling off the campaign took a significant investment of time, it gave us an opportunity to put excited community volunteers to work. The response that we received was an encouraging indicator of grassroots support of the project. We are excited about many things in the works including companion planning and intercropping for our summer crops, installation of a rainwater catchment and irrigation system, field trips from schools nearby, growing barley for a downtown Raleigh craft brew, a restaurant moving in next door that will use the produce, and more. Erin Bergstrom, Co-Founder, Raleigh City Farm

The restaurant, called Market, is located at 938 Blount Streeet, and features whole, all-natural and unprocessed foods from local sources—you can’t get much more local than next door.

New Urban Farmers in Rhode Island used Kickstarter to raise $6,060 to support their aquaponic dome greenhouse project. Of their 81 backers, one backer donated $1,000 to the cause in return for a personal garden built by New Urban Farmers at the donor’s home. This donor helped them exceed their $5,000 goal. Other gifts donors received included seed packets, garden markers, mushroom logs, and membership in the CSA. Emily Jodka says of their crowdfunding experience, “Our Kickstarter campaign was a great success—we were able to reach our goal and even exceed it by more than a thousand dollars. We were so happy to see the support we got from our community and beyond. “We got to work right away installing our solar water heater and solar-powered fans. Now we are heating the water for our aquaponic system with help from the sun as well as powering fans to keep the air moving and fresh inside the geodesic dome greenhouses. “Our compost heaters will be ready to go once the weather cools in fall. It is great to know that we will be less dependent on grid energy to keep our greenhouse growing and our aquaponic systems running.”

Located in Brooklyn, New York, Bushwick City Farm raised $5,319 to transform a blighted city block into an urban farm with free-range chickens, fruit trees, and vegetables that would be given away free to the community. The majority of their $5,000 goal was to replace the contaminated soil with new clean soil. Although Bushwick City Farm offered gifts for donations more than $500, most of their 116 backers donated in the range of $10 and $25 in return for thanks on their website, a chance to name a chicken, and handmade postcards featuring the garden chickens.

Growing Cities: A film about Urban Farming in America is a documentary film by Dan Susman and Andrew Monbouquette in Omaha, Nebraska. The film follows two friends on their journey across the country as they meet the men and women who operate urban farms in vacant city lots, rooftop gardens, and backyard chicken coops. The project originally set a goal of $35,000 but raised $39,602 from 802 backers. The backers received acknowledgements in the film credits as well as early access to the film, digital download, or a DVD.

We will be using the funding to hire an editor and to complete post-production on the film. Crowdfunding is an amazing tool not just because of the money you raise, but the community you build and the connections you make.  An audience is the golden nugget for documentary film and crowdfunding recruits one even before the film is completed.  That is a new and exciting development, especially for young filmmakers like ourselves. Dan Susman