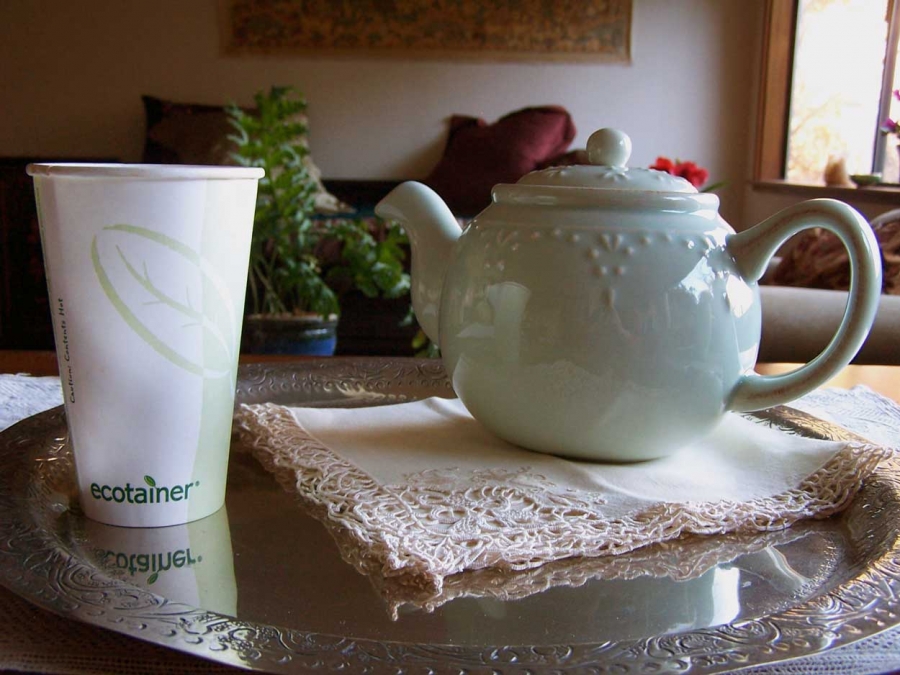 It used to be that restaurant to-go packaging, save Chinese take-out, was made out of Styrofoam which came complete with a set of disposable plastic cutlery.  Today restaurants are switching to packaging made from biodegradable plastics such as PLA and Bagass, or recycled paper products, printed with soy or vegetable-based inks.

Trademarked for over 60 years by the Dow Chemical Company, what was once called extruded polystyrene foam is better known today as Styrofoam. Styrene is made from a byproduct of petroleum and natural gasses and is used to create common, everyday plastics that can be formed into the hard-shelled foam to-go box and the sleek and solid cutlery that comes with your take-out.

Styrene is biodegradable.  Polystyrene, being a more stable form, can take hundreds of years to disintegrate.

Dart, a company which manufactures plastic and Styrofoam packaging, commented on the positive attributes of the long lifespan of Styrofoam.

According to Dr. William L. Rathje, an archaeologist with the University of Arizona’s Garbage Project and a leading solid waste authority, “The fact that plastic does not biodegrade, which is often cited as one of its great defects, may actually be one of its greatest virtues.”  Because biodegradation can lead to the release of harmful methane gas or leachate, which can contaminate groundwater, it is preferable to place non-biodegradable rather than biodegradable products in landfills, although obviously landfill is a last resort for disposal.

Although Styrofoam products may take hundreds of years to completely disintegrate, they will, nonetheless, disintegrate—slowly and over time—releasing methane into the atmosphere and contaminating groundwater.  Despite the length of time it takes to fully disintegrate, the ever growing quantities of plastic and Styrofoam-based rubbish that end up in landfills means that the chemical byproducts released by one cup is severely magnified—drastically increasing its environmental impact.

In 2007 the city of San Francisco, California, banned the use of Styrofoam to-go containers, following the lead of cities such as Portland, Oregon, and Berkeley, California, which had banned them years before  The Food Service Waste Reduction ordinance that issued the ban further mandated that all to-go containers be either recyclable or compostable.

Common alternatives to plastic and Styrofoam to-go packaging can be made from a variety of different organic materials including corn (PLA), sugarcane (Bagasse), potatoes, soybeans, grass, cellulose, and recycled paper.  These alternative products take the place of their plastic counterparts in almost every way, except in their environmental impact.  Some biodegradable plastic packaging can even be microwaved and dishwasher safe, making them reusable instead of single-use.

The movement away from traditional petroleum-based ink and towards a soy alternative began in the late 1970’s due to the oil-crisis earlier that decade.  The skyrocketing price of petroleum strained printing agencies and this, coupled with a push from soy farmers in support of a soy-based ink, allowed it to become a mainstream printing material.  Although ink can have a base made from a variety of different vegetable oils, soy has become the most common, which could be attributed to two factors—soy ink is as efficient and usable as petroleum based-ink and it received massive support from the powerful soy farming industry.

Research on the environmental benefits of using soy-based ink over petroleum is limited, however its superiority has been presented in two ways by green printing agencies and soy-ink suppliers.  First, petroleum is a nonrenewable resource that, due to its high demand and decreasing supply, is becoming an ever increasingly expensive commodity—while soy on the other hand is a renewable resource that is fairly cheap to grow.  The second benefit is that, although there is no official data to verify this, during high volume printing processes using soy inks, fewer volatile organic compounds (VOC) are released into the atmosphere.

GreenerPrinter.com stated its own research on the levels of VOCs emitted from both types of ink. “Greenerprinter uses soy and vegetable-based inks that have evolved to VOC levels of zero percent, down from conventional commercial sheetfed inks that measure VOC levels of 25-35 percent.”

The increasing number of cities banning the use of Styrofoam and plastic to-go containers in conjunction with the growing number of suppliers has made compostable to-go packaging a better alternative in a single-use culture.   Non-profit organizations like the Biodegradable Products Institute are emerging to educate the public and push for legislation that supports the use of compostable over plastic to-go containers.  These efforts, in conjunction with labeling that certifies biodegradability such as those issued by the American Society for Testing and Materials (ASTM), have worked to make compostable packaging a more sensible way to take your food to-go.

While all of these developments are steps in the right direction, ultimately we need to press on to the root of the problem: our attachment to a disposable culture.  As people around the world take such steps as bringing their own reusable grocery bags to the market, the most sensible direction for diners is to bring their own reusable containers for take-out.

Find out what bio-plastic to-go containers are made of, or read about reusable takeout containers in our Waste-Free Lifestyle column.

Plastic Ocean: How a Sea Captain’s Chance Discovery Launched a Determined Quest to Save the Oceans

Cooking Notes Start with cold water. Put all your ingredients in a pot, fill with cold water and then bring to a boil. Don’t boil… Read more
Here are a few excellent, easy to follow recipes on how to make your own jam to your preference: preserved in the freezer, fresh in… Read more
Our top picks for cooking this weekend Healthy and delicious recipes and inspiration from some of our favorite sites. Cinnamon Almond Baked Oatmeal TheHealthyApple.com Warm,… Read more
What do you think of prunes? This amazing pairing of lamb and prunes is guaranteed to give you a new perspective on this humble ingredient.… Read more
A blender is a quick cook’s best friend and sauces can be made in a snap.   Sometimes you just need a sprig or two… Read more
Sprouting is a great way to add nutrient and protein rich foods to your diet if you are cutting back on meat and animal products.… Read more
When you look at your grocery bill as a whole, you’ll find that processed foods are often the leading driver of your expense. This is… Read more
Sprouting at home is an economical and convenient way to boost your nutrition and avoid the pitfalls of antinutrients in grains, nuts, seeds and legumes.… Read more
17 Feb – Restaurant / Restaurant / Reuse / Waste