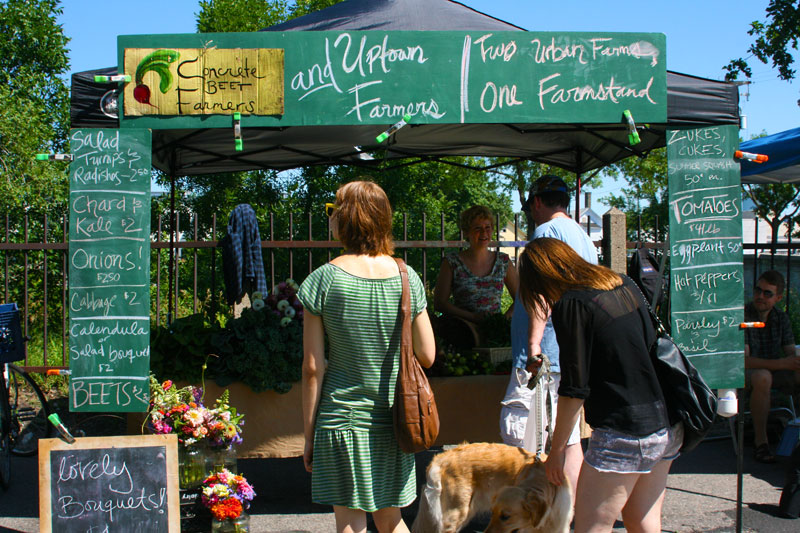 Stone’s Throw Urban Farm is a newly founded market farm which takes small, vacant lots in the Twin Cities of St. Paul and Minneapolis, and turns them into profitable urban farms which supply the local community with fresh, organic produce.   So far, Stone’s Throw has cultivated 15 plots, ranging in size from an eighth of an acre to a half; the produce from which is sold at local farmers markets, through a CSA program, and directly to other local wholesale accounts. Alex Liebman, resident farmer of Stone’s Throw and formerly at Concrete Beet Farmers, explained the genesis of the newly established urban farm in a recent interview with EthicalFoods.com.  Alex said that after their first year of farming, the Concrete Beet Farmers called upon other local urban farmers who shared the aspiration of turning urban farming into a small, profitable business that could support living wages for its workers. “We were all struggling to move it from a sustainable hobby to an actual business,” said Alex. A collaboration was formed with two other urban farms—Uptown Farmers and Pig’s Eye Urban Farm—to pool together their resources and create what is now Stone’s Throw Urban Farm. As a newly conceived and unconventional business, the farmers at Stone’s Throw did not believe that they could secure a business loan, nor did any of them feel comfortable with taking one out in the first place.  So the farm looked to the crowdfunding website Kickstarter.com to raise funds for their start-up costs.  At the end of their fund raising period, the group had raised $908 beyond the original $15,000 they had asked for.

The perils of temporary land use

Like most urban farmers, those at Stone’s Throw try not to pay for their use of the vacant lots they reside on.  In most cases, Stone’s Throw is able to work out a deal with landowners to use their land in exchange for a share in their CSA program, which provides the owners with a set amount of produce throughout the growing season—a value of roughly to $500-$650.  In some cases other deals can be worked out, as they did with one plot of land in which they acquired a several year lease in exchange for paying the annual property taxes. Alex says it can be beneficial for a landowner to allow them to farm the property because farmers both maintain the land and enhance the soil quality through plant cultivation and composting. For urban farms like Stone’s Throw, vacant underutilized plots of land are the foundation of the urban farming business. Although beneficial to the landowner whose property is maintained, the farmer who receives a living wage job, and the surrounding neighborhood which receives access to fresh food, the temporary nature of this land is a peril experienced by many urban farmers. Eventually, most landowners will try to find someone to buy or lease the lot to in order to generate revenue from it. Using temporary land means that the labor and financial investment that goes into the urban farm may eventually be lost.  Because of this, it is difficult for urban farmers to plant long term perennial crops, such as raspberries and apple trees, and the effort that goes into building up the quality of the soil essential to a productive farm will be forfeit.  This also presents a threat to the farmers’ livelihoods, which are tied to the land. “It is really hard for urban farmers to find permanent land,” commented Alex. To buy or lease a plot of land is usually out of a farmer’s price range, as it is priced for the housing market and not with agricultural use in mind.  Vacant lots are chosen by urban farmers because, for the most part, they will be able to barter for use of the land or obtain a subsidized lease from the city.  There are a few groups across the US who are working to create agricultural land trusts to support urban farming. Alex commented that although Stone’s Throw hasn’t had to leave any plots yet, it is an inevitability.

Dealing with the neighbors

Although there has been a lot of public support for urban farms, there have been some disgruntled protests from neighbors and city councilmen over the idea of farms moving into residential areas. Some people find hoop houses (rounded greenhouses which can sometimes be as tall as 12 ft or 3.6 m) to be an eyesore.  Others worry that market farms (farms that sell their produce on-site) will lower property values, prohibit development, create unsightly and possibly smelly compost piles, and draw traffic and noise. When asked to comment on these concerns, Alex said that, for the most part, the community has been very supportive.  Stone’s Throw has, however, dealt with some discontent. “We had some council members upset about hoop houses and all sorts of things—and I think that’s just going to happen,” Alex said. In his experience, tension does sometimes rise around utilities.  Stone’s Throw urban farms are dependent on their neighbors for water supply.  With the owner’s permission, the urban farmers will hook up a meter and pay for their portion of the water used.  Some neighbors are naturally wary of sharing their water supply because it brings up the question of liability.  For instance, if a water pipe were to break, who would be liable to fix it? Despite a few complaints, neighbors have been, overall, supportive.  Community-building has been one of the cornerstones underlying the urban farming movement.  Alex says that neighbors will keep an eye on the farm while they are not there, discouraging vandalism and theft.

Urban Farming made legal in Minneapolis

Minneapolis has recently passed a series of regulations defining and governing urban farming. Under these newly constructed zoning regulations, urban farms can now officially sell their produce on-site, which had been previously banned due to the concern that a business selling in a residential area could bring excessive traffic and noise. Similarly, beekeeping, hoop houses, aquaponics, and compost pits are all now legal and regulated.   This government-led effort to support and monitor urban farming is being taken on by St. Paul as well, which is in the process of drafting up its own regulations. Read more about other cities which are implementing urban agriculture regulations.

Apart from providing local communities with access to organic food, one of the main goals of the urban farming movement is to create a viable way for people to earn a living wage.  So far, most of the profits made by Stone’s Throw last year were just enough to cover the cost of production. One of the major hurtles preventing urban farming from providing year round employment is the inability to produce during harsh winter months.  For most of the farmers at Stone’s Throw, the farm is only a part-time job, and for now during the winter they will fall back on their second job in order to carry out the season. Alex sees potential for expanding and diversifying their operation in the future to make it more profitable.  He hopes to do so by erecting hoop houses to extend the growing season, leasing warehouses for a larger range of distribution, and possibly milling their own grain to sell.  However, at their current size, and given the limit of the resources available to them right now, they are getting by—but not thriving just yet.

At the end of our interview, I asked Alex what advice he would give to aspiring urban farmers. The first thing he suggested was for farming novices to take an internship at a large, organic farm to understand how large-scale farming systems work in order to efficiently implement these principles on a smaller scale. “I would take what I learned and scale it down, rather than the other way around,” said Alex. “There is so much knowledge in rural parts of America around farming that it would be very foolish not to incorporate that into the urban environment.  There are tons of people in rural America who grow beautiful food, and they’ve been doing it for a very long time.” A second suggestion that Alex offered was to do some research into the community that you wish to cultivate before establishing an urban farm.  Talking with neighbors, local landscaping companies, and other urban farmers can provide information that may effect growing—such as weather patterns, soil quality, micro-climates, and anything else specific to the area.

Moving to the burbs

Alex urges that the next big movement in agriculture be focused around suburban farming initiatives—taking corporate lawns and sprawling, decorative suburban landscapes and turning them into edible gardens and farms which could support the local community. “I don’t know why golf courses can’t grow arugula,” commented Alex on the ample space and resources used to maintain lawns. Many suburban neighborhoods are situated on fertile growing land which was once used for farming.  Suburbia also has the space to grow crops—like sweet corn and summer squash—which urban farmers are unable to plant due to the space required to grow them. This would not only benefit locals by providing a clean source of food but also put the water that goes into maintaining lawns towards something that quite literally sustains the community.

“There used to be all of these regionalized [food] hubs that supported cities and to take that back and recreate that, I think, is huge,” said Alex.

Alex Liebman recommends: The New Organic Grower: A Master’s Manual of Tools and Techniques for the Home and Market Gardener (A Gardener’s Supply Book)