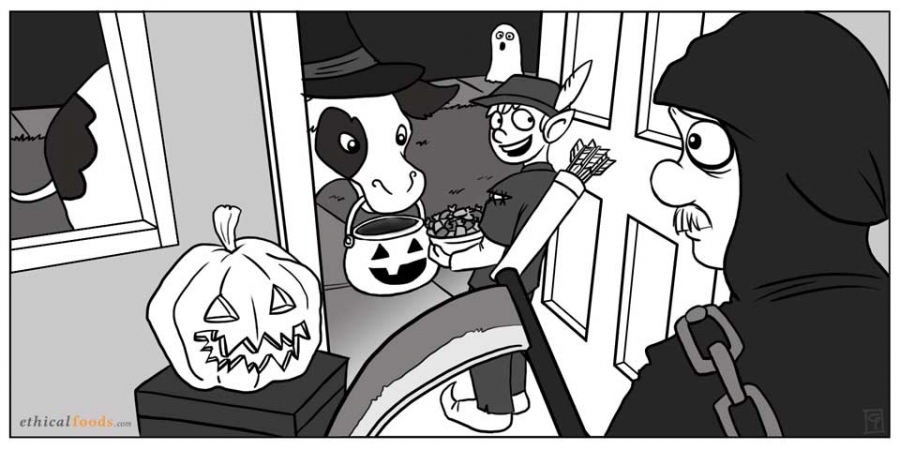 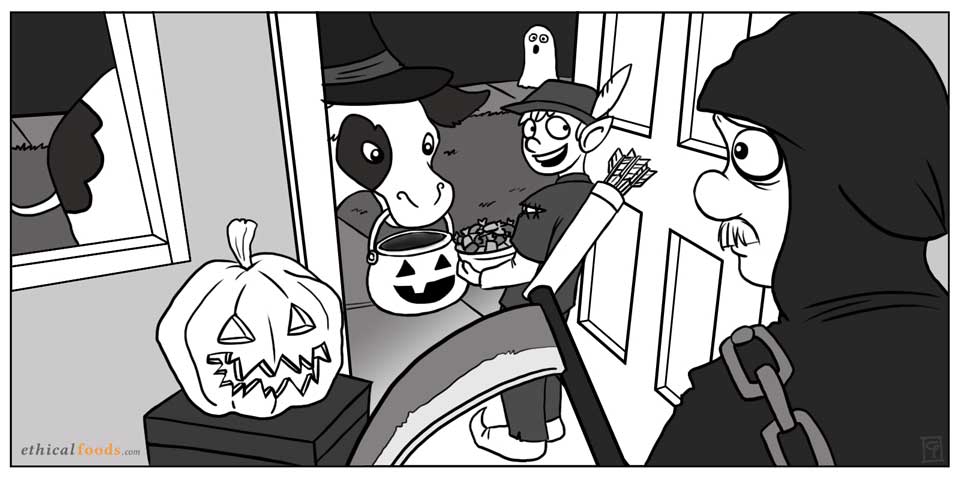 In the face of higher feed prices caused by worldwide droughts, some livestock farmers have resorted to less than savory alternatives to keep their cattle alive and fat.

We’ve been concerned about cows being fed GMO grain, hormones and antibiotics. Farmers have now added such things as candy and chicken poo to their list of unhealthy and unnatural feed ingredients. Is this anyone’s idea of sustainable agriculture?

What do cows eat? Grass.

If you ever had a book of farm animals when you were a kid, it probably depicted cows and sheep in fields eating grass.  Ask any kid, what do cows eat?  Grass! But as we grow up, we find that some of the information we learned in those early years is outdated, oversimplified or just downright false.  Father Christmas?  Tooth Fairy?  Nope, not any more.

You’re all grown up now and you’re savvy, right?  You know that most cows don’t live on open pastures eating grass, as depicted in those early picture books.  Cows, whose stomachs are designed to eat foraged grasses, actually eat a diet high in grain, such as corn. You’re also aware that it’s common practice for livestock feed to contain by-product feedstuffs.  And you know that term—which sounds so bland as to conjure images of absolutely nothing when you read it—means cheap waste products leftover from the production of human food. Of the astoundingly diverse items on the menu of by-product feedstuffs which can supplement livestock feed are candies and chocolates, cookie meal, cherry juice, fish meal, pet food fines (remanufactured waste from pet food production), and pelletized poultry waste.

What happens when there’s not enough corn?

As a result of the rising prices of feed grain, there have been reports of desperate farmers resorting to these alternative feed additives to make up the bulk of their animals’ diet. One of the reasons the 2012 US drought was so detrimental to the food industry was its timing.  The rapid progression of extreme heat conditions during early July came at a pivotal time in crop development, greatly reducing later crop yields in grains such as corn, soy and wheat. Livestock farmers have been hit hard as prices for these feed staples have been driven up by this restriction in supply.  Record high prices for corn in particular have further compounded the financial hardship for livestock farmers who already have an outstanding competition over this versatile grain with processed food manufacturers and biofuel companies.  The USDA reports that severe drought has impacted 67 percent of cattle production in the US.

From a larger-picture perspective, I totally admire anyone making use of the waste stream.  That said, I personally would prefer not to eat lots of candy-fed meats simply because of possible bioaccumulation of slight toxins like dyes and preservatives (if a hog is eating 1,000 bright blue sour candies, and then you eat the hog, it’s sort of like you’re eating 1,000 of those candies). Also, if fed to ruminants, candy is going to have a similar effect on the fatty tissues of the meat that grain does.

In addition to the practice of feeding candy and other sugar-laden, highly processed foods to cows is the less-than-appetizing, government approved, feed ingredient: chicken poop.  According to the Department of Animal Sciences at the University of Missouri: “The large quantities of litter produced during poultry production are expensive to dispose of safely; moreover, protein is typically the most expensive ingredient in ruminant diets. Feeding poultry litter is a means of disposing of a waste product while concurrently supplying a low-cost protein feed to beef cattle.” The strange logic of feeding chicken excrement to beef cows (who eat grass, naturally) as a viable source of protein does not stop at the normal health concerns.  Chicken feed has been found to contain arsenic, caffeine, pain killers, anti-depressents, and antibiotics which are regularly administered to animals confined to concentrated feedlots.  All of these chicken feed additives have the ability to pass through in the poultry’s waste to the cows that eat it.

While most will grasp instantly the absurdity of feeding candy and feces to cows, let’s not lose sight of the bigger picture. Ruminant animals—who are designed to eat forage and grasses in open pastures—are often fed an unnatural diet based on corn, soy and a myriad of other additives as seen in the strange assortment of ingredients in chicken feed. Here is what two grass fed, pasture raised cattle farmers had to say about the new trend in candy-laden feed: “Since the livestock turn into food for us, feeding them something that is bad for their health will make a meat that is not as healthy for my family or customers,”