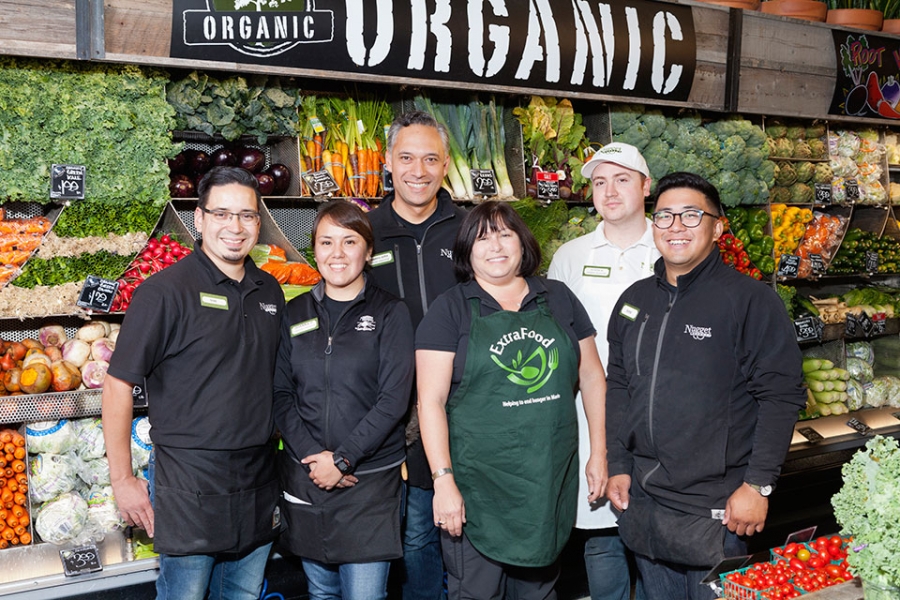 In Marin County, one of the wealthiest counties in America, one in five residents is food insecure. That’s nearly 50,000 people in Marin, half of them children and elderly, who don’t have a steady supply of nutritious food on which they can depend. Many are hardworking families struggling to put food on the table every day in the face of ever rising living costs and skyrocketing rents. Others are seniors who have to choose between buying food and medication, while others are homeless or veterans.

There is enough food for all

Many of Marin’s grocery stores, school districts, caterers, event venues and other food businesses end up with unused edible food, much of which goes into landfill. Some businesses are starting to recognize that there are better ways to handle excess food than throwing it away. Nugget Markets is one of those companies. With 12 stores across Northern California, including three stores in Marin County, Nugget Markets has joined with other Marin food businesses in getting this excess, nutritious food to those who need it.

We want to help build up lives and actively be a part of the life here. That extends to the community outside the store and how we feed and nurture those around us.   Eddie Reduta, Corte Madera store dairy manager

Nugget Markets Director of Sustainability, Jeremy Patin, has been spreading solid sustainability practices into every aspect of the business, from company headquarters to its warehouses, and every store.

Achieving zero waste and bringing quality food to those in need

The company has taken on the goal of achieving zero waste. Jeremy examines the company’s resource use and has been instituting company-wide practices for scaling back its environmental impact. In addition to conserving water and electricity, food waste has been targeted for elimination. In the past two years, the company has diverted 70 percent of their waste from landfill. How are they able to do this? One way is through food donations. Why do companies throw out perfectly edible food? This is a widespread issue in the food and agriculture industries that has recently been in the spotlight. Most people are still unaware of the staggering amount of edible food that is wasted. Whether food is reaching a manufacturer’s expiration date, produce isn’t cosmetically perfect or seasonal buying habits shift, there are things out of a grocer’s control that create a certain amount of excess, even with careful planning. This means food that’s still delicious, nutrient-rich and ready to eat needs a home. Their food donations span a wide variety of foods including fruits, vegetables, juice, eggs, fresh-baked breads, pies, yogurt and milk–foods that low-income families and individuals often can’t afford to buy. Congress recently enhanced tax incentives for businesses donating food to nonprofits. But that’s not the only way food donors can save money while giving back. “Putting focus on diverting waste saves us money through cutting back on having waste hauled away,” says Kanoa Aipia, director at the Corte Madera store.

Giving the food is the first step, getting the food to where it is needed is a crucial factor

For their food donation program, Nugget Markets looks for local partners whose standards meet their own. Before opening their Marin stores, Jeremy contacted ExtraFood, a nonprofit that’s helping end hunger and food waste in Marin County. Through their countywide food recovery program, ExtraFood picks up surplus, fresh food from Marin businesses and brings it directly to those who need it. Nugget Markets chose ExtraFood for their intimate knowledge of the community’s needs. ExtraFood works closely with Marin nonprofit partners that serve low-income children, adults and families, staying up-to-the-minute on their food needs. ExtraFood then locates and delivers food donations that meet those needs. Equally important to Nugget Markets is that their donation partners deliver the food at the level of quality the store provides to their own customers. This means deliveries need to be made quickly, a unique service ExtraFood provides. ExtraFood’s flexible volunteer team picks up Nugget Markets’ donations–six times per week from the Corte Madera store–and delivers the food to its recipient partners in less than 30 minutes. The company provides ongoing training and education at every level of the organization. There is a “Green Guru” in each store who looks for more ways to cut back on waste and increase sustainability. Each store has a technology platform for communicating daily updates to its 1,800 employees. Messages go beyond what everyone is supposed to do every day, and talk about why they’re doing it. This gets employees invested in programs such as donating, recycling and composting, while the training they receive creates the discipline and the procedures.

There’s a lot of education that goes into why we do what we do. We don’t ask employees to go through the motions, but instead help them understand our approach to sustainability.   Eric Stille, Nugget Markets CEO

The impact of Nugget Markets’ donations is felt throughout the company. Beyond reducing their environmental footprint, employees appreciate what the company is doing to help vulnerable people. “Donating food helps breathe life into the community, and ExtraFood makes it easy for us,” says Eddie Reduta. “I don’t have to deal with the guilt of throwing things away that people really need.” ExtraFood delivers Nugget Markets’ food to several recipients, including People’s Inter-City Fellowship church in Marin City, one of the areas in Marin County most affected by poverty. In a community of roughly 2,600 people, there are no grocery stores and no easy ways for people to get to stores in nearby towns. The food donations to the church are critical. ExtraFood’s deliveries started once a week, serving children at the Marin City Recreation Center, and grew to daily deliveries. The Center ran out of space, forcing the program to move the donations to the church in order to accommodate all the people who need food.

“Kids come when their parents aren’t home and they don’t have food in the house,” says Leticia Jones, director of Doing Things at Marin City Recreation, and a member of the church. “People with babies who live on food stamps come for milk. Seniors who need food at the end of the month when their government benefit checks run out come for a bag of groceries.” Rotary Manor, an independent senior residence in San Rafael, also benefits from ExtraFood’s deliveries of Nugget Markets’ donations. The deliveries supplement the food of residents living on fixed incomes or those who need the extra help to make ends meet. “Being a senior and self-employed with a fluctuating income, the food donations really help out,” says Gena Galenski, a resident at Rotary Manor.

The effect on people in the community reaffirms to Nugget Markets that their partnership with ExtraFood is working. And the more food businesses that get involved in ExtraFood’s program, the more progress the community can make toward reducing food waste and mitigating hunger in Marin County. “Our donations go beyond a program and become an extension of our belief that we are members of the community,” says Eric Stille. “We have a role to play and value to add. If we each do our part, we can make a big difference.”

Visit ExtraFood.org to learn more about their program and how you can participate as a donor or volunteer. Read our interview with Marv Zauderer, the founder of ExtraFood. Visit their website to learn more about Nugget Markets. More Ethical Foods articles about local businesses taking leadership roles, keeping edible food out of landfills and donating it to alleviate hunger in their communities: Daily Bread: Doing Business and Doing Good How Green is Your Favorite Restaurant? Here are a couple of organizations who’ve found novel ways to get excess food into the right hands: Petaluma Bounty Hunters CropMobster.com
26 Jan – Community / Poverty / Waste