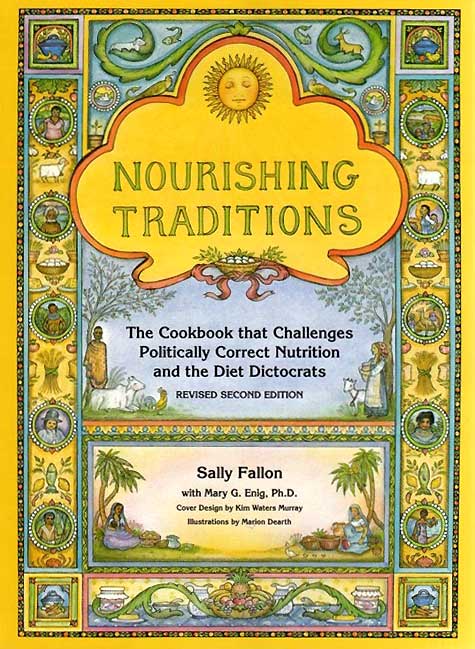 At the beginning of Sally Fallon’s Nourishing Traditions she addresses the dramatic change in the American diet from what our human ancestors ate, noting a rise in the number of health problems and diseases such as cancer, heart failure, ulcers, allergies, etc., all of which are far too common amongst modern Americans.  Fallon poses a question: if American eating and health habits have improved—meaning that we are exercising more, smoking less, lowering our sodium intake and so on—then why are we still getting so sick? To answer this question, the author takes a look at the notorious USDA approved Food Pyramid, stating that it has its good parts as well as its bad, but heavily criticizing a one-diet-fits-all approach.  To find the truth in this criticism, we need only look at the Food Pyramid’s suggested grain intake, which holds the largest portion on the pyramid, in light of the growing number of people who are discovering that they have an intolerance to gluten. The author breaks down each component of our diet scientifically (vitamins, proteins, beverages, carbohydrates, salts, milk and dairy products, etc.) to teach us what kinds are healthy and which are not, as well as where our notions of a “healthy diet” originate—whether they come from specific scientists’ or nutritionists’ studies or the USDA, which is heavily influenced by the few Big-Ag corporations that produce most of our foods. The second part of the book educates the reader on basic cooking skills, including what kind of equipment to use, how to plan for immediate and future meals, and many other cooking tips preparing the reader for the recipe portion of the book. My only problem with Fallon’s recipes is that many of them call for an ingredient(s) which requires a separate recipe, forcing the reader to go back and forth through the pages to complete one dish. The end of the book includes a few helpful appendices which list fast food chains and common grocery items which contain generous portions of trans-fats and others which sport misleading labels such as “diet” or “low fat”. This mislabeling reminds me of a recent Eggo commercial I saw on television in which two children wallow in dismay because their mother is supposedly on a new “health kick” which undoubtedly will be pushed onto them.  However, the children are happily surprised when their mother gives them low fat, whole wheat Eggos for breakfast, a food product which apparently falls under her new health regime. When I checked out Nourishing Traditions from the library, upon noticing the title, my librarian became giddy with excitement, explaining that there were some real gems in the book and that she thought I would thoroughly enjoy it.  After reading the book myself, I completely understand her enthusiasm for this great work on nutrition and the American diet.

Nourishing Traditions: The Cookbook that Challenges Politically Correct Nutrition and the Diet Dictocrats

The Fourfold Path to Healing: Working with the Laws of Nutrition, Therapeutics, Movement and Meditation in the Art of Medicine