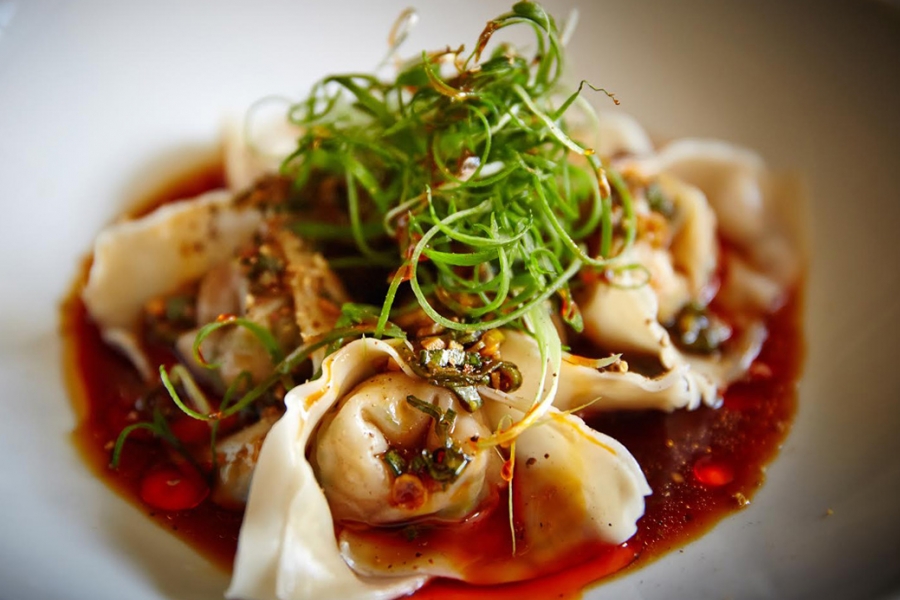 Billy Kwong isn’t a person. The moniker for the tiny eco friendly restaurant in Sydney, Australia, is an amalgam of founding chefs Bill Granger and Kylie Kwong, who opened the spot in 2000. Granger has since left the partnership and Kylie remains the sole owner.

Kylie’s bijoux restaurant is located in the Surry Hills neighborhood of Sydney, a once down-and-out corner of the city that has been reborn as a hipster paradise full of art galleries, cafes and bistros. It operates out of a narrow storefront where space is at a premium both in the kitchen and in the dining room. No reservations are accepted, with the exception of one table for large parties.

Billy Kwong’s food focuses on modern interpretations of the Cantonese cuisine the fifth-generation Chinese-Australian chef grew up cooking and eating. The restaurant’s signature dish is crispy duck, served with seasonal fruit—plums, oranges or mandarins. The rest of the menu changes seasonally, but fried and steamed fish, stir-fried vegetable dishes, dumplings, wontons and noodle rolls are prominent.

Unlike many stars of the sustainable restaurant scene, Billy Kwong did not start out dedicated to green principles. Kylie Kwong had long held an interest in sustainable concepts, stemming in part from the her devotion to Buddhism and its practice of mindfulness, or living in a state of awareness and connection. In 2005, Kwong chose to put her principles into practice and transition the restaurant toward using only organic and biodynamic ingredients—not only for its fresh produce, but for the components of its sauces, noodles, vinegars and oils.

“Every time I think of a new provider or using an ingredient, I ask whether it’s sustainable,” Kwong told the Sydney Morning Herald, whose “Good Food Guide” section awarded Billy Kwong its inaugural Sustainability Award in 2009. “I think about its carbon footprint, whether it’s ethically produced and about serving food that has been harvested with love and integrity. Knowing the growers means you treat produce with respect. It’s also a way of re-humanising the food chain.”

Chef Kwong took her commitment to green practices one step further by offering diners the chance to donate to the restaurant’s renewable energy program. Billy Kwong purchases its electricity from a wind farm in Hebei, China.

Kylie has plans for further ecological improvements to her restaurant as well. In the kitchen, she’s installing waterless woks—wok stoves that rely on air instead of water to cool the searing temperatures wok cooking generates.

Chef Kwong has also recently started incorporating “bush foods” into her menu—foraged native Australian foodstuffs such as samphire or sea beans, desert limes, saltbush leaves and Warrigal greens. “Integrating these ingredients into my cooking makes the notion of Australian-Chinese food more authentic and meaningful,” Kwong states on her website.

The celebrity chef’s sustainability efforts extend beyond the kitchen. Soon after Billy Kwong’s opening, Kylie Kwong achieved national and then international fame as a television chef. Several books soon followed. Her latest, It Tastes Better, highlights some of the food producers she works with at Billy Kwong. Chef Kwong has also partnered with international anti-poverty foundation Oxfam, producing a line of tableware emblazoned with a signature lotus—all of whose proceeds go to support Oxfam’s work. The tableware is manufactured in Vietnam according to Fair Trade principles by Mai Handicrafts.