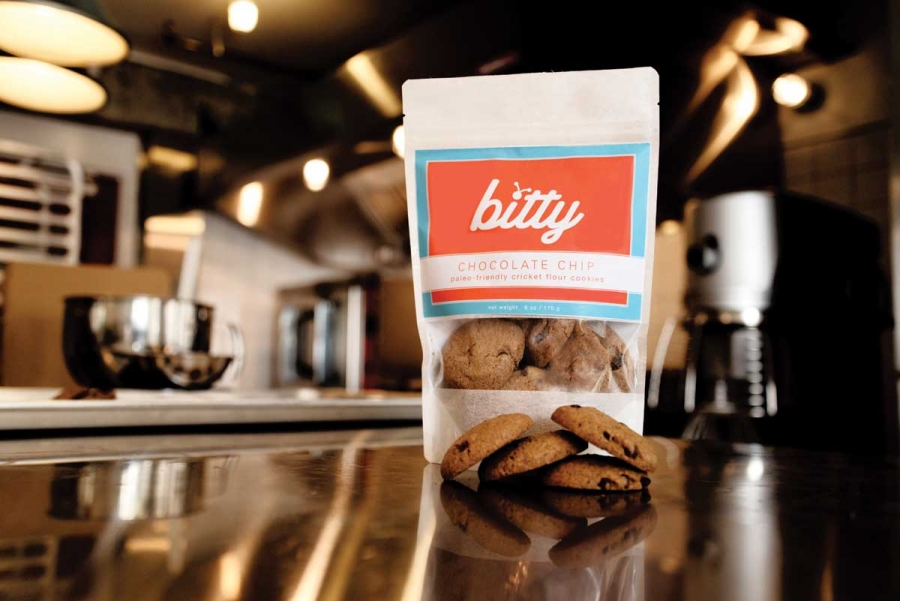 If you’re not ready to eat insects whole, try baking with cricket flour

A stroll down your local health food store’s baking section will confirm that flours for baking and cooking are becoming increasingly diverse.  If you’re avoiding gluten, flour or all grains, there are now many options from coconut flour to ancient grains, such as teff and spelt. An alternative flour that also touts its environmental sustainability is Bitty Foods’ grain-free baking flour made with protein-rich cricket flour. That’s right…ground up crickets. The insects are harvested from farms in the United States and Canada that use non-GMO feed. After the crickets are washed in a bath of boiling water and slow-roasted, the insects are milled to a very fine powder. This process enhances the naturally nutty flavor of the crickets. It’s not just the unique flavor that’s a bonus; it’s also the protein, healthy fats and micronutrients present in the flour. Besides Bitty Baking Flour, Bitty Foods also sells baked goods fashioned from the flour. “We’re starting with cookies, but we plan to launch a range of food products based on cricket flour,” Ziegler said. Their sweet treats created from ground cricket flour also contain healthy, recognizable ingredients like coconut oil, coconut sugar, cocoa powder, and chocolate chips. They are dairy and grain free. Cookies are available in three flavors: chocolate chip, chocolate cardamom, and orange ginger.  Ziegler says that Bitty Foods chose crickets from the wide range of available, edible insects because “we think crickets are a great ‘gateway bug’ for Americans because they are high in nutrition and feel more approachable than some insects might.” Eating insects may not be mainstream among Americans and Europeans, but insects are a food staple in Asia, Africa, and South America. Ziegler says that Bitty Foods’ growing sales indicate that Americans appear to be increasingly open to experimenting with nontraditional fare “when they are presented in the form of delicious foods.” Ziegler notes that the United Nations confirms that insects provide a sustainable food source that can “help stabilize the global food supply.” The United Nations names crickets as among the most popular insects in the global diet, along with beetles, caterpillars, bees, wasps, ants, and grasshoppers in a 2013 article on its website, which describes a book about edible insects written by the Food and Agricultural Organization, one of its agencies. Ziegler said, “Crickets are also already commercially farmed in the US, so there’s a body of knowledge and existing infrastructure to help our business scale.” The Bitty Foods flour recipe combines the cricket flour with non-grain ingredients such as cassava, a South American root vegetable, and coconut. The flour can be used as a 1:1 ratio replacement for regular baking flour.