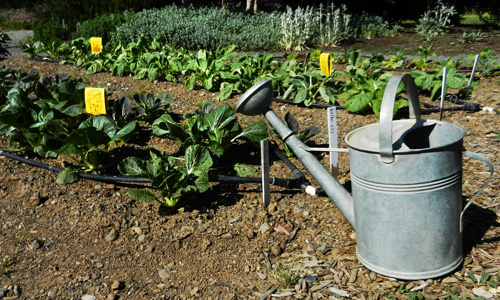 While certified organic farming has been the focus of much attention in the move toward sustainable agriculture, other methodologies and philosophies are being used with great success, though considerably less fanfare.

Inspired by Bill Mollison’s observation of self-sustaining ecosystems in rainforests in Australia, permaculture provides a method of analyzing the environment and designing systems—such as farms, gardens and human habitations—to work with natural flows and processes. Permaculture is closely related to human scale living, homesteading, and the appropriate use of technology and natural resources—especially the finite resource of oil energy. Permaculture has as its foundation the following principles: One example of a farm designed on permaculture principles is Three Sisters Farm in Pennsylvania. Owners Darrell and Linda Frey have spent a number of years working toward a sustainable, permaculture-inspired system. One of the primary components of Three Sisters Farm is the bioshelter: an integrated greenhouse ecosystem complete with microclimates, solar heating, compost systems, and a small flock of chickens. The bioshelter with its various climates and zones promotes healthy growing of seasonal fruits, vegetables and seedlings—providing produce for the regional foodshed even in the cold Pennsylvania winters. Darrell Frey’s book—Bioshelter Market Garden: A Permaculture Farm—has received excellent reviews and is the basis for a series of workshops, lectures, and courses in permaculture. Similarly, Brambleberry Farm in southern Indiana has utilized permaculture principles in designing their fruit, nut and berry nursery. Darren and Espri Bender-Beaurgard, owners of Brambleberry, focus on creating rich soil to promote the fertility and disease resistance of their plants, using compost made onsite.  Their newest experiment is with mob-grazing a small fledgling herd of 100% grass-fed cattle, using human scale tools.

Biodynamics is the marriage of three philosophies: spiritual, ethical, and ecological—combined to generate balanced health and fertility within farms. Developed by Austrian Dr. Rudolf Steiner (1861-1925), and widely adopted since the 1920’s across the world; biodynamics focuses on ecological, economic, and social sustainability in agriculture. Steiner originally coined the term anthroposophical agriculture; it was others who later named his ideas and principles biodynamic. Biodynamics largely focuses on the interdependence of the natural world. The idea of a sustainable ecosystem can be illustrated by a wilderness forest and the way in which water and life, fertilizer and food, are cycled through the system to create and sustain a world independent of the need for external inputs or intervention. Benziger, a biodynamic winery, has developed a model pyramid that illustrates this interdependence and sustainability. The pyramid consists of: spirit, working with the rhythms of nature, biodynamic preparations, closed nutrient system, self-regulating systems, biodiversity and estate farming, personal connection to the land, observation, and anticipation.

Like permaculture, there is no one central methodology, and each farmer who follows this philosophy demonstrates his own unique interpretation. Ecodynamic agriculture focuses on promoting biodiversity. Ecodynamics has been adopted in various parts of the world, and varies slightly in its form and function depending on the group facilitating the endeavor and the crops grown. Ecodynamics incorporates the ideas of bringing as much native growth, flora and fauna back into regional areas in order to out-compete pests and non-native species that can take over and destroy the natural ecology of a given area. Meadowlark Vineyard in Washington, a state in the Pacific Northwest of the US, has adopted this policy, growing native grass beds for the Western Meadowlark birds to nest in. The meadowlarks do their part by acting as a natural control of insect pest.  This is one example of ways the an ecodynamic farms strives to keep the native ecology intact. Flying Disc Ranch in California operates an ecodynamic system, which is also inspired by biodynamics, and brings the two together in a way that creates an organic oasis in the midst of the desert. Growing dates and citrus in a non-cultivated growing area completely organically maintained, Robert Lower, the farmer/owner, is continuously evolving the system to find ways to blend his interests in permaculture, biodynamics and ecodynamics. Flying Disc Ranch produces its own compost, in quantities of nearly 200 cubic yards per year. This compost is added to the lush undergrowth that is allowed to remain in the palm forest, and is increased through water, aeration, sunlight maximization, and living mulch.

Polyculture farming promotes cultivating several different crops in one area in order to imitate a natural ecosystem. Conventional agriculture relies on monocultures—stripping the native flora down to the bare soil and replacing it with large tracts of a single crop.  Nature favors diversity, with each component—plant or animal—serving many purposes in support of the whole.  Monocultures are associated with soil erosion and a loss of ecosystem balance. With polyculture, varying species of plants and wildlife are introduced or nurtured to imitate the way that a naturally occurring ecosystem thrives. Polyculture farming can help reduce the need for inorganic and chemical fertilizers, as well as pesticides.  The system encourages native wildlife—such as frogs, birds, spiders and predatory insects—who prey on crop-destroying pests. By planting different species and crops together, there is less likelihood that one environmental stressor, such as a pest or disease, to wipe out the entire harvest.

Proponents of regenerative farming maintain that by growing organically and recycling material back into the soil and environment, the ecosystem is made more resilient, safer and more fertile. Farmers who adhere to this philosophy seek to do more than just avoid damaging the environment through use of chemicals—their aim is to regenerate the soil and ecosystem, leaving it healthier, more diverse and richer by all their practices. Regenerative farming begins with understanding how soil is built and maintained, and what makes soil healthy. Ultimately, the answers to those questions are life and water. Without proper water in the soil, microbes cannot thrive, and it is microbes that bring life to soil and thus the benefits. Spiralridge Permaculture offers information on what they call Regenerative Earthworks, or the process through which they optimize water levels and biology in the soil—which in turn optimizes crop growth and healthy living. Similar to the principles of biological farming where the soil is king, Regenerative agriculture places the highest level of importance on soil composition and quality. These methods have been studied for more than 30 years. The system now includes the attributes of regenerating woodlands, streams, and natural environments; as well as how this regeneration returns to communities and benefits everyone. Regenerative farming is also said to significantly reduce the carbon footprint of crops grown while providing crops that have a higher nutrient content compared with their conventionally grown counterparts.
01 Sep – Sustainable Farming / Biodynamic / Biological Farming / Ecodynamic / Farming / Permaculture / Polyculture / Regenerative Agriculture / Sustainability