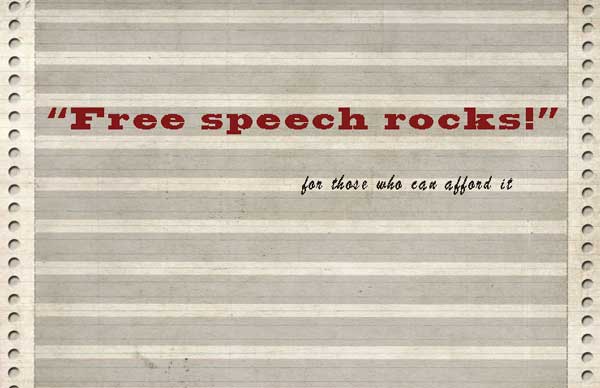 Laws that make it dangerous to speak out about food and uncover abuses have a chilling effect on public discourse about what we eat, how it’s made and how it affects our health.

Earlier this year, Iowa and Utah joined North Dakota, Kansas and Montana in implementing what is commonly called “ag-gag“ law, which makes it a criminal offense to take a job at a farm, animal facility or slaughterhouse in order to uncover and document inhumane and unsanitary animal farming practices.  This tactic has been used by investigative journalists and animal welfare activists to bring to light some of the darker corners of industrial agriculture. Ag-gag laws take various forms.  Some states penalize taking pictures or videos of animals in agricultural operations without permission, while other states criminalize the act of applying for a job at an agricultural operation under false pretenses.  The latter form of the law enables employers to directly ask applicants if they are affiliated with the press, a labor union, or any animal welfare groups.  An applicant can be charged with a misdemeanor, or even in some states, a felony, if they do not reply truthfully. These laws are very convenient for states like Iowa, the nation’s largest egg and pork producing state, and Utah, whose primary agricultural commodities are beef and dairy products.   In the past, undercover work on factory farms has led to some of the biggest recalls of meat and dairy products. [callout]>In 2011 an undercover investigator working for the non-profit organization, Mercy For Animals (MFA), used a hidden camera to document the living conditions of hens at Sparboe Farms (the nation’s fifth largest egg producer) in Iowa, Minnesota and Colorado.  The video footage revealed dirty hens living in cramped battery cages, laying their eggs next to other hens which had died due to extreme unsanitary and physically tormenting living conditions, and had been left to rot in neglect.  Further abuses included burning the beaks off of hens without pain killers and workers throwing hens into plastic bags, leaving them to suffocate.  Sparboe supplied eggs to such chain food suppliers as McDonald’s, Sam’s club, Supervalu, Target and Hy-Vee, all of which, with the exception of Hy-Vee, ended their business relationship with Sparboe once the undercover video footage was aired on ABC’s Good Morning America, 20/20 and World News Tonight. MFA put Iowa in the spotlight once again that year, this time uncovering animal welfare abuses at Iowa Select Farms, one of the nation’s largest pork producers.   The undercover investigator witnessed and documented management at Iowa Select Farms training their employees to cut the tails off piglets using dull clippers as well as castrating them without the application of painkillers.  Piglets were seen thrown across the room and sows, female pigs, were confined to gestation crates hardly bigger than their bodies. These crates were used to restrict their movement so sows could not endanger themselves or other sows (aggression is a common occurrence in all animals living in close confinement, including humans) while they are pregnant—a state that they are kept in perpetually.   According to the MFA, the constant birthing required of these sows led to physical maladies such as “distended, inflamed, bleeding, and usually fatal uterine prolapses.”  Sick or injured pigs were left neglected to die slowly without veterinary care. The MFA undercover investigator’s report attracted the attention of mainstream media, shining light on the methods many factory farms use to raise their pigs—to millions of viewers.[/callout] Factory farms are not only known for inhumane animal rearing practices but the sanitation issues that coincide with cramming hundreds, if not thousands, of animals in close quarters.   In 2010, the Humane Society of the United States (HSUS) found that the cramped living conditions of hens in egg production facilities increased the risk of exposing the public to egg-born Salmonella.   Indeed, the prevalence of disease and bacteria growth in these concentrated animal feeding operations (CAFOs) require copious amounts of antibiotics in order to fend off illness. Undercover investigation at such farms is a powerful tool to provide transparency to a notoriously opaque food system.  Although written accounts and reports of animal abuse and unsanitary conditions are useful, just two minutes of video documentation or even photos taken at factory farms have a much greater and immediate effect on consumers by giving them a visual account.  We can become enured to the dull repetition of overused words, such as abuse, confinement, unsanitary, and so forth.  But what do these words really mean? When people see for themselves, they are often shocked into action. Similar bills to those recently passed in Iowa and Utah have been shot down in Illinois, Indiana, Minnesota, Tennessee, New York, Nebraska and Florida.

It is not just undercover investigators who have to worry about their work to create transparency within our food system being made illegal.  Food disparagement laws have been passed in thirteen states that target anyone, journalist or no, who criticizes the safety of food, how it is produced, or questions whether or not certain foods are healthy to eat.   These laws lower civil liability standards, holding those who knowingly present false information implying that food is unsafe, without scientific evidence to back it up, liable to pay for any damages to those food producers affected by their statement. [callout]As an example of how this law works, let’s consider a hypothetical journalist who questions whether consuming soy and products that contain soy is healthy, given that 94% of soy in the US is GMO.  That journalist could not only be sued by the soy industry but if the soy industry were to win, the journalist would not only have to pay for the soy industry’s loss of profits incurred by the journalist’s statements, but also all of the soy industry’s legal fees.  If the journalist were to win, on the other hand, the soy industry would not be required to pay the journalist’s legal fees.[/callout] States that have passed such laws include Alabama, Arizona, Colorado, Florida, Georgia, Idaho, Louisiana, Mississippi, North Dakota, Ohio, Oklahoma, South Dakota, and Texas. Food disparagement laws were even put forward to be included in the 1996 Farm Bill in order to apply them to all states at the federal level. Fortunately this provision never made it in the final bill.

Perhaps one of the most famous food disparagement cases to date is Texas Cattlemen vs. Oprah Winfrey and Howard Lyman.  Mr Lyman is a former cattle farmer and animal welfare activist, and the law suit was brought for statements made on the Oprah Winfrey show in April, 1996, which implied an increased risk of mad cow disease due to the prevalence of rendered beef as a common component in livestock feed (feeding cows to cows).   To this statement, Ms Winfrey most famously replied, “It has just stopped me cold from eating another burger!” After the show aired, cattle prices dropped dramatically, which allegedly cost the plaintiffs—consisting of four Texan ranching families and their cattle companies—around $11 million.  They claimed Ms Winfrey had defamed hamburger meat and attributed this financial loss to her statements. Under the law, the plaintiffs were required to prove that both Winfrey and Lyman’s statements were not based on scientific data.  The case took 6 years and millions of dollars in legal fees for Oprah and Lyman to finally win the case. At the end of the trial, Oprah victoriously stated, “Free speech not only lives, it rocks!”  Ordinary people, however, do not have the money to fight a 6 year legal battle and see a lawsuit like this through.  In light of Oprah’s extensive legal fees, I would say, “Free speech rocks for the few who can afford it.” Our tax dollars go to legislators who are supposed to get laws passed which are in the interest of the people.  When the law discourages investigative journalism uncovering the most heinous abuses against living beings and requires individuals who are prosecuted for sharing their views on food to pay for the legal fees it takes for a food corporation to sue them, tell me, in whose interest were these laws created?

Slapps: Getting Sued For Speaking Out

The Big Chill: Investigative Reporting in the Current Media Environment

Everything I Want To Do Is Illegal: War Stories From the Local Food Front