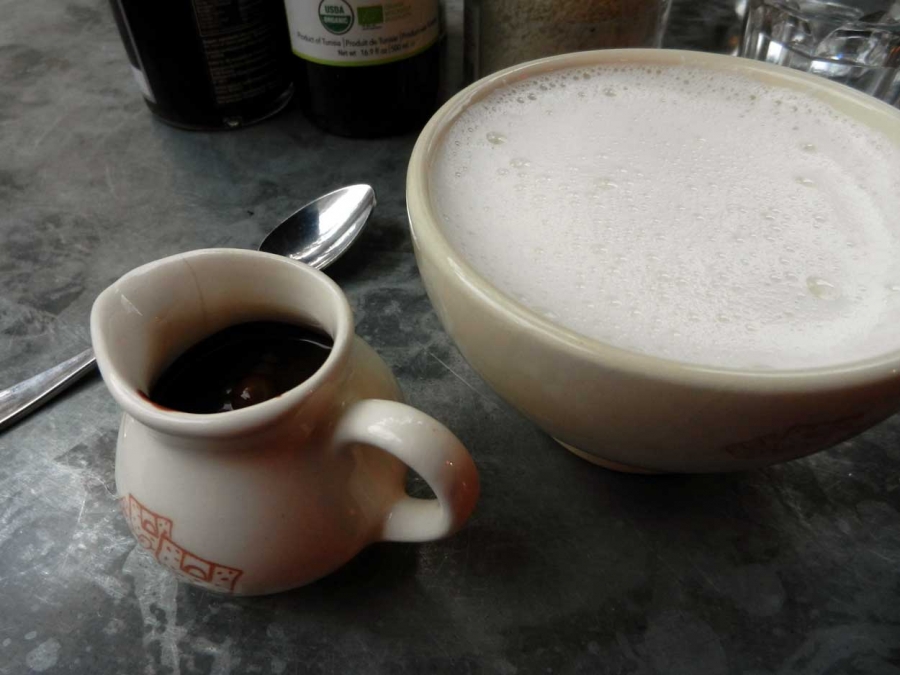 Beyond the serious issues with animal and environmental welfare in the dairy industry, I have another problem: eating dairy makes me feel sick. I can have some, but not too much and not too often.

I’ve been tested for allergy to dairy casein as well as lactose intolerance, and both tests came back negative. I also notice that I don’t feel ill when I eat dairy in India (go figure!) or France.

There is a book out, called Devil in the Milk: Illness, Health and the Politics of A1 and A2 Milk

, which puts forward the case that there are actually two kinds of milk in the world today. One is from an older strain of cows, found predominantly in France, Asia & Africa, with a few herds in Australia and scattered elsewhere around the world. These cows purportedly produce milk with the original beta casein protein, which the author claims is easier to digest and confers the health benefits we typically associate with dairy consumption. This milk is being called A-2.

The second, and more modern, kind of cows allegedly produce A-1 milk. It’s claimed that a mutation occurred around 5,000 years ago that caused these cows to produce milk which has a beta casein protein that has mutated ever so slightly, to create a peptide called bcm7 that acts as a powerful opiate. This slightly mutated beta casein has a propensity to break apart during digestion, rather than holding together like its A-2 cousin. The fragmented protein can penetrate the gut lining and enter the bloodstream, and it is thought that this has a deleterious effect on the human body.

The beta casein proteins found in milk are supposed to stay in your intestinal tract, but it is claimed that the fragmented casein from A-1 milk breaks through the gut barrier and enters the bloodstream, where it wreaks havoc on pretty much all the organs of the body. Some are attributing a long and varied list of serious conditions—ranging from juvenile diabetes to heart disease to autism—to this casein incursion into the bloodstream.

Another issue with dairy is pasteurization. Many raw milk enthusiasts claim that the process of heating milk to kill potentially harmful bacteria and significantly increase shelf life causes similar problems to A-1 milk. They claim that, when milk is exposed to high temperatures, enzymes and nutrients are destroyed, and the proteins are blasted apart.

When pasteurized milk is observed microscopically it is a massive destruction zone. It looks as if it has been hit with a bomb and everything is dead, broken and twisted. Everything is in little pieces and nothing is alive.

With all this destruction of nutrients, milk does not become simply a non-nutritious, but inert food. Those blasted and fragmented proteins are claimed to go on to cause many diseases, ranging from asthma to heart disease.

I love raw dairy from 100% grass-fed cows, and consider it a very nutritious and healing food, which I enjoy in small doses whenever I can get my hands on the stuff. Since raw dairy is illegal in many states and persecuted to near extinction in California, it’s not always easy.

If A-1 milk causes health problems, and 100% pasture raised raw dairy is superior, then wouldn’t a combination of the two be the ideal?

Some flaws in the logic

I’m uncertain about the science behind the claims of A-2 milk. Organic Pastures posted online that they looked into getting their herd tested to see which kind of milk they produced. They had a very hard time doing so.

First, they said that A-2 milk is actually a brand that is owned by the company that does the testing. And in order to claim to have A-2 milk, they would have to sell their milk under the A-2 corporate brand. In addition, the A-2 company required all milk sold under their brand to be pasteurized, so obviously that was a non-starter.

The test is performed using a tail hair from the cow, so it is not invasive. However, the company charges a considerable sum for it.

Organic Pastures makes a good point: if the massive rise in chronic disease in the US is linked to A-1 milk, and this genetic mutation took place around 5,000 years ago, why the relatively sudden jump in disease rates? They point out that disease rates shot up after pasteurization became mandatory. That sounds more likely to me.

What do I know?

After looking through the available data, I still am not certain about the claims of A-2 milk. But I have no other way to explain why I can consume (happily) as much dairy as I please in places like India and France. Most milk in France is pasteurized, so except for the delicious raw milk cheeses I eat there, I am theoretically still drinking blasted, destroyed, pasteurized milk.

The French, way back when, declined to take on the modern herds that we have in the US, and most of the rest of the western world—preferring the higher quality of their ancestral dairy cattle over the increased yields of the new herds. Thus, most French dairy is said to be A-2. As are the dairy cattle in India and most of Asia.

Anecdotally, many people are claiming nearly miraculous reversals in ill health after switching to A-2 milk. You would think that if drinking A-1 milk was making them sick, they would simply stop consuming any dairy at all. So it’s all a bit confusing, and I remain a skeptic.

Goat and sheep milk is said to be completely A-2, and I’m a big fan of sheep milk yogurt and goat butter. I’ll continue to enjoy raw milk when I can get it, high quality pasture raised organic milk in small amounts, and all kinds of delightful things when I’m in France and India. Yet another reason to visit my friends in Paris and Bordeaux. Vive la France!

Have your read our Sustainable Kitchen Guide for buying humane, healthy and ethical milk, cheese and dairy? Find it here.

Devil in the Milk: Illness, Health and the Politics of A1 and A2 Milk

Sweet Cream and Sugar Cones: 90 Recipes for Making Your Own Ice Cream and Frozen Treats from Bi-Rite Creamery